Last week, thanks to a generous grant by the Fund for Investigative Journalism, I was given the opportunity to travel to Philadelphia, where the International Association of Chiefs of Police Conference was being held. If you’ve ever wondered what a police trade show is like, you’re about to find out.

The expo hall was quite literally packed with every kind of police tool, gadget, firearm, vehicle and system you can possibly imagine. The vendor list on the brochure map they gave out looks like the index of a very well researched nonfiction book. Obviously, I had limited time, and couldn’t visit all of the hundreds of booths. But there were some standouts.

Gun vendors were especially prevalent: Glock had a heavy presence, as did Sig Sauer, with Beretta the slightly smallest of the three. Glock had a particularly magnificent promotional magazine, which you’d better believe I helped myself to. 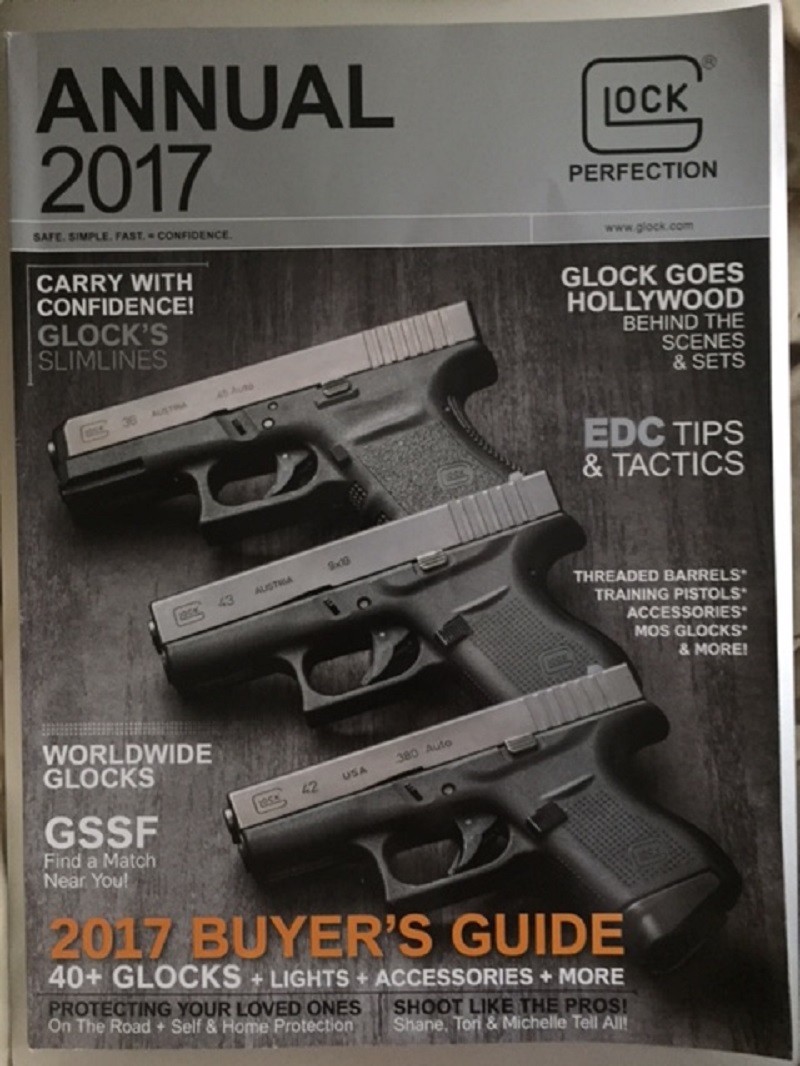 Glock had only pistols on offer, while Sig Sauer was hawking primarily assault rifles. I noticed some booths would have dry spells throughout the day, while Glock and Sig Sauer were consistently packed with officers weighing the guns, talking about the guns, and I’m sure buying the guns.

PepperBall also had a large presence. When I stopped by the booth, I was assured the product was a much more humane option, as the rounds fired by the various devices simply slam into a person with enough force to make them “think twice,” and then explode into a cloud of pepper spray. 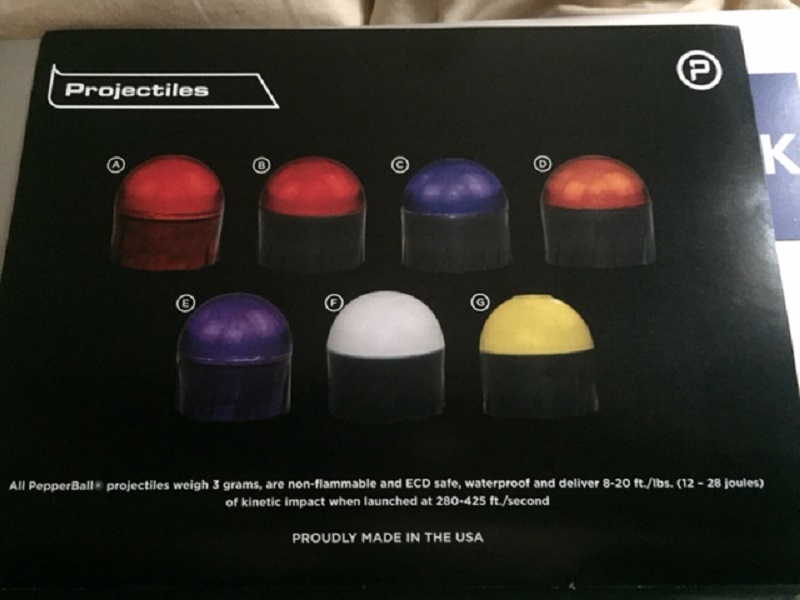 Not dangerous or incredibly painful at all, I’m sure.

Axon, the most prominent producer of the taser had a huge presence, complete with a crisis reenactment tent which allowed customers to play a scenario that looked remarkably like Columbine.

This is perhaps one of the biggest changes American law enforcement has seen over the last two or three decades, and there was no better place to take this in than the expo hall in Philly.

Shotspotter was a huge hit, even given a coveted presentation slot. The company sells microphones that police departments can pay to have set up in high crime areas in their jurisdiction. While they have recently admitted that the microphone does in fact run constantly, the company says that it only sends captured audio clips to police departments when they are sure it was a gunshot, and even then the clip is limited to one second before the gunfire begins, and one or two seconds after.

Cellebrite, the Israeli mobile phone data extraction device company also had a large presence, and I was even allowed to witness what it looks to vacuum up all that data. There was an app called MobilePD which helps to crowdsource police reports. A British company there called the UK Defense and Security Organization was selling everything from a robot which could be used in hostage situations, to a disposal system for controlled drugs that turns them into a kind of fuel. 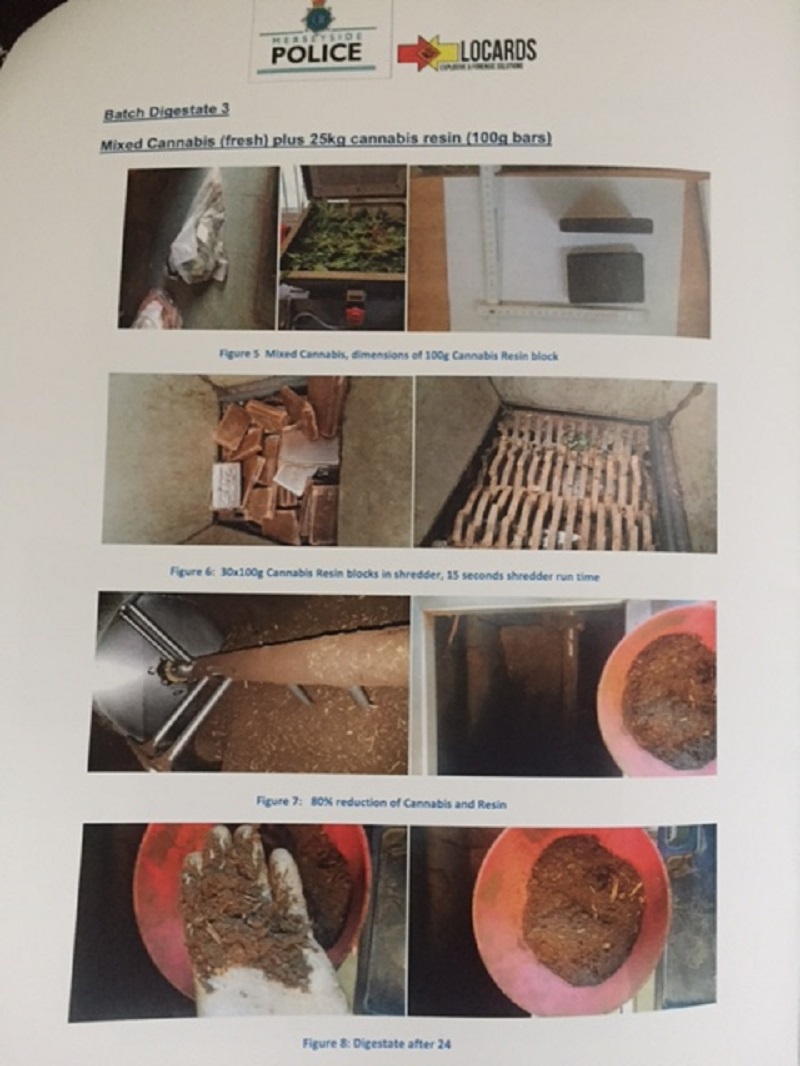 Hard to imagine, but there are people working towards a future where policing is literally fueled by low-level drug busts.

A company called Aeryon was selling drones by the FAA booth. I was assured they were not to be used for general surveillance, but the brochure does seem to tell a different story. 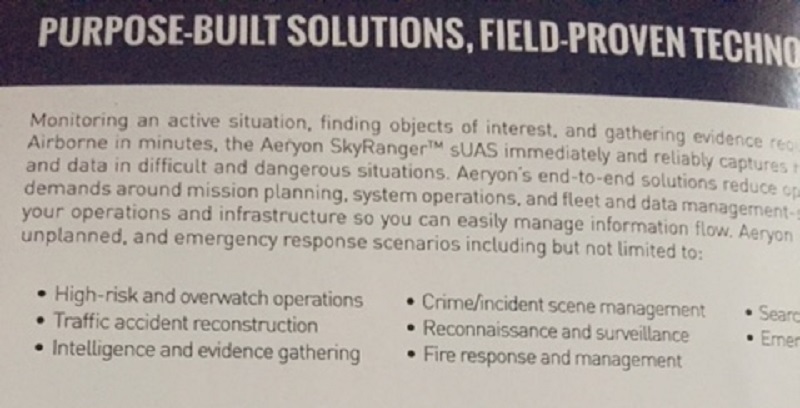 There were facial recognition companies there like FaceFirst, explaining to police chiefs why their product would help their agency become more efficient and accurate, while also explaining to the press (mainly me) why they would definitely not be used for any kind of darker purpose.

Body camera companies were in abundance, with perhaps the biggest being Body Worn.

The only company to deny me any kind of interview: Hawk Analytics, maker of CellHawk a “Call Detail Record Mapping & Analysis for Law Enforcement” product. While police can already do this, it takes them days in some cases with present technology, to rebuild a suspect’s daily routine, or the history of a particular day. With CellHawk, it takes five minutes.

And there were the vehicles. Some were just simply the latest Chevy and Ford Interceptor style patrol cars, emblazoned with Blue Lives Matter flags. But Lenco, the maker of the BearCat also had a booth, as did B.A.T.T. which stands for Ballistic Armored Tactical Transport. Considering this behemoth vehicle looks suspiciously exactly like the MRAP (Mine-Resistant Ambush Protected) vehicle the military uses, its interesting to deconstruct the acronym B.A.T.T. because the two mean more or less the exact same thing. 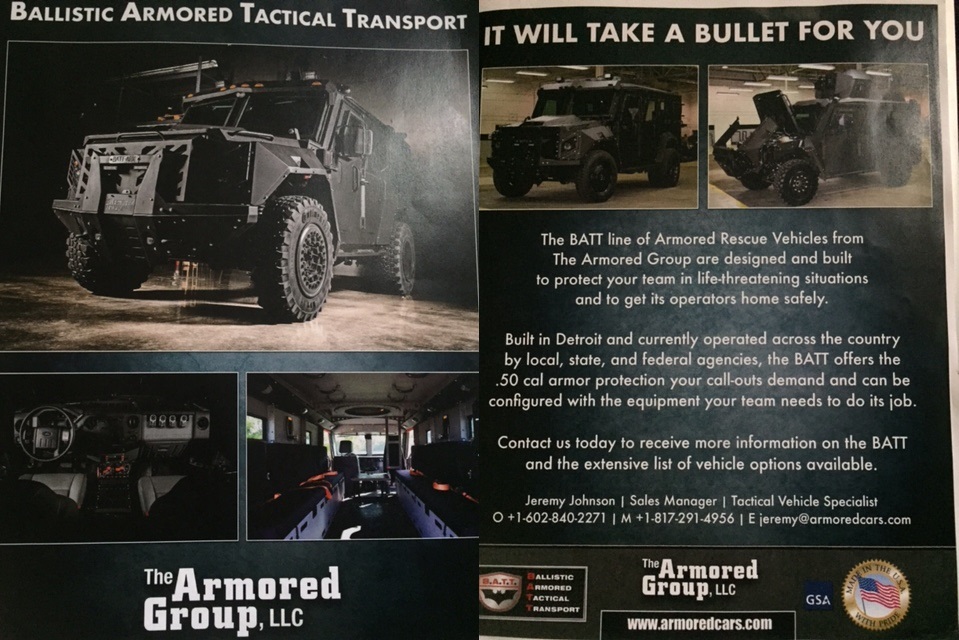 Lenco was especially proud of its robotic arm, which was supposed to provide a safe and effective way for police forces to break into a building without ever leaving the vehicle. I was told about several incidents in which police were being strafed with gunfire, and without the BearCat, surely would have perished. We’re going to be doing some background research on that claim.

Indeed, there is quite a bit of research to be gained yet from the experience. We’ll be filing records requests about many of these pieces of equipment and technology, finding out which agencies are using them, and if possible, how so. In the meantime, a list of presentations for the IACP is embedded below, and associated hand-outs are available here.