A CIA quiz on domestic intelligence authorities reiterates that the New York City Police Department does not qualify as an intelligence agency when it comes to information sharing. But the CIA-NYPD relationship has a long history, and the two agencies haven’t always filled in all the bubbles correctly.

The Central Intelligence Agency released the quiz in response to an ACLU lawsuit under the Freedom of Information Act. The undated quiz broadly covers the CIA’s authority to conduct intelligence operations, both abroad and within US borders.

Under regulations also released to the ACLU, the CIA may provide specialized equipment and training to other federal agencies, as well as to state or local law enforcement in cases where lives are at risk. If agency lawyers approve, the CIA may also provide translation assistance or “generalized training” to any other government agency on a case-by-case basis.

But the law limits sharing of collected information about American citizens, resident aliens and other “US persons.” As one question on the quiz highlights, the CIA cannot share such information outside the intelligence community. It’s important, then, to know which agencies are within the fold.

The National Security Agency, Coast Guard and Department of Energy qualify as “IC elements”, the latter two via their intelligence arms. As a local police force, the NYPD does not make the cut.

Why such a blunt and seemingly obvious question? The CIA and the NYPD have a longstanding and “unique” partnership, which was the subject of a 2011 inquiry by the CIA Office of the Inspector General.

“The Agency’s longstanding relationship with [NYPD’s Intelligence Division] is unique,” the review begins. “OIG is unaware of any similar relationships between the Agency and other local law enforcement entities in the United States.”

The OIG review found no illegal activity by CIA agents cooperating with or even working within the NYPD, but plenty of irregularities around documentation and guidance. The CIA released a summary of the OIG review findings to the Electronic Privacy Information Center in 2013 as part of a lawsuit settlement.

Since 2002, the CIA has assigned four officers to provide “direct assistance” to the NYPD. Their titles and duties ranged from “Special Representative to the NYPD” to training analyst on counterterrorism. An NYPD detective also received operational training at the CIA. 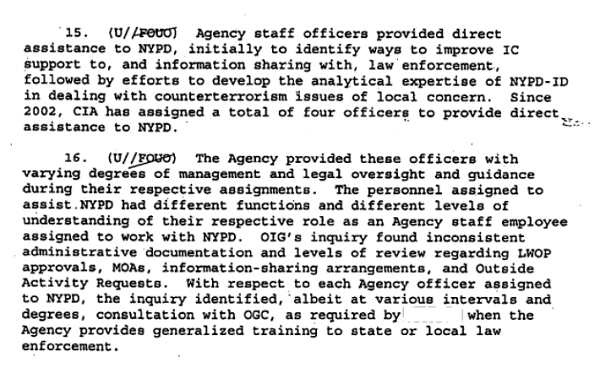 “[T]he risks associated with the Agency’s relationship with NYPD were not fully considered and that there was inadequate direction and control by the Agency managers responsible for the relationship,” the December 2011 report summarized.

One assigned CIA agent, who was on unpaid leave from the agency while embedded within the NYPD for several years, was never briefed on the restrictions made explicit in the above quiz question. After resigning from the CIA in 2009, he continued to work for the NYPD.

Another agent who was assigned to train NYPD analysts in “analytic tradecraft,” claimed she was aware of appropriate restrictions on working with local law enforcement. But the CIA did not sign any memorandum of agreement with the NYPD regarding her assignment until the OIG began its inquiry.

The inspector general did find that the CIA consulted with its lawyers prior to assigning each agent, as required by agency regulations. The review concluded, however, that agency officials were inconsistent in establishing clear parameters and documentation requirements, including around defining “information-sharing arrangements” between CIA agents and the NYPD.

It’s unclear whether any CIA officials or analysts currently work alongside NYPD officers on a day-to-day basis. But if they need a primer on legal limits on information sharing between intelligence agents and local police, there’s a practice test that covers the basics.

Take the full quiz below: