Files released by the Federal Bureau of Investigation reveal that early twentieth century activist and co-founder of the American Civil Liberties Union, Elizabeth Gurley Flynn predictably spent at least 1921 to 1924 under surveillance by undercover agents. The documents specifically focus on a speaking tour Flynn launched after the July 1921 conviction of Italian anarchists Nicola Sacco and Bartolomeo Vanzetti for murder. 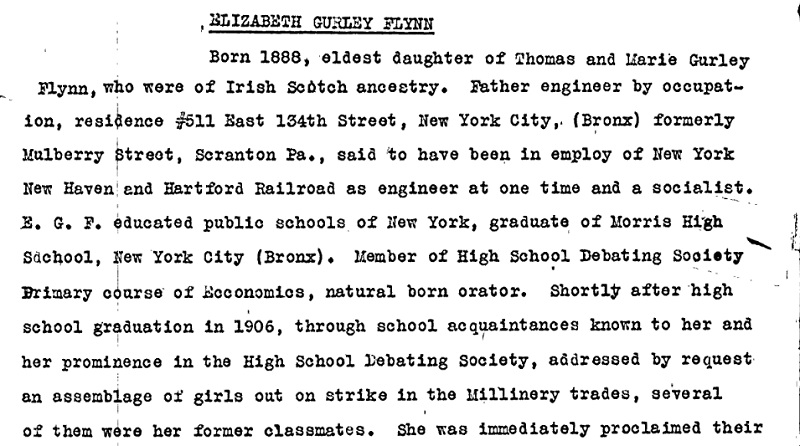 Flynn became an outspoken orator and labor activist with during the heyday of the Industrial Workers of the World, a revolutionary labor union that housed advocates for open resistance to capitalism and the wage system. Flynn earned acclaim within the movement in part because of her speeches at notable actions such as the 1906 Lawrence textile strikes and the 1913 Patterson silk strikes. In 1920 she became one of the founding members of the ACLU.

The documents from the 1921-1922 speaking tour show that undercover agents attended her lectures about the Sacco and Vanzetti case in Buffalo, Pittsburgh, Detroit, Chicago, and Kansas City.

In a number of cities, the agents attempted to engage Flynn in conversation but found her unwilling to talk about anything besides upcoming speaking engagements. After that the agents describe milling around the meetings, picking up radical pamphlets and literature, and even chatting with the other attendees about what a disappointing lecturer she was.

Aside from transcripts and meeting notes, the file even contains a copy of an intercepted letter sent to Flynn from an inmate at Leavenworth prison advocating that she stop raising money at meetings.

The letter accuses her of using the guise of supporting I.W.W. prisoners to “camouflage and gain your own financial ends.” He even proclaims that, “by your actions you have done more to keep us in here than the Dept. of Justice.” 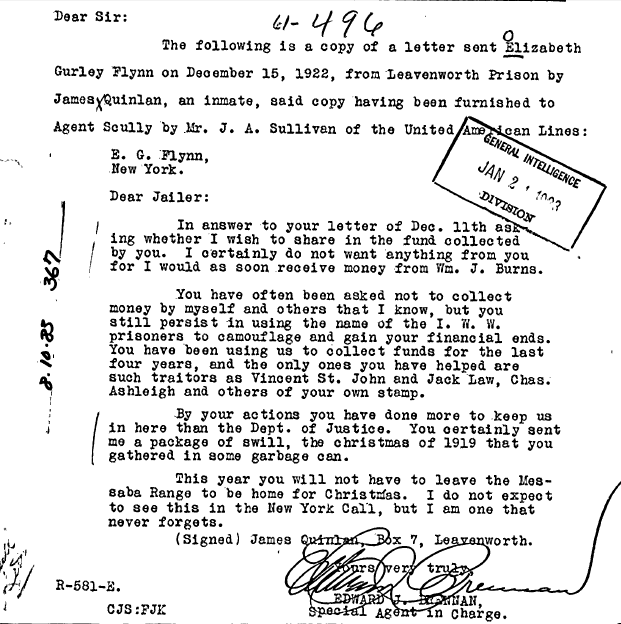 And unsurprisingly for an agency that has shown to be particularly self-conscious at times, the documents pay special attention of Flynn’s critique of the Department of Justice, and Bureau of Investigation, and the Bureau’s director William J. Burns. 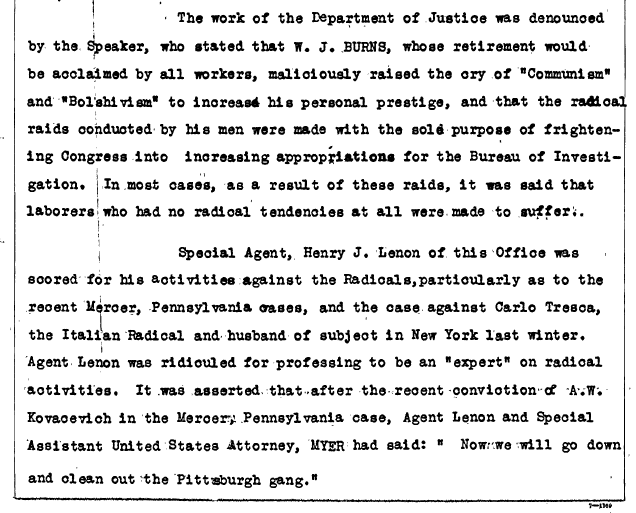 Read through the full file embedded below, or on the request page.

Photo via Library of Congress