Training documents released to MuckRock user C.J. Ciaramella by the Drug Enforcement Administration provide unprecedented details on the tactic known as “parallel construction,” by which agents reverse engineer evidence to hide surveillance programs from defense teams, prosecutors and a public wary of domestic intelligence practices. But the DEA redacted all references to another, apparently more secretive method of concealing sensitive sources.

Per DEA slides, there are precisely four such methods that are both “workable” and acceptable to the American public. 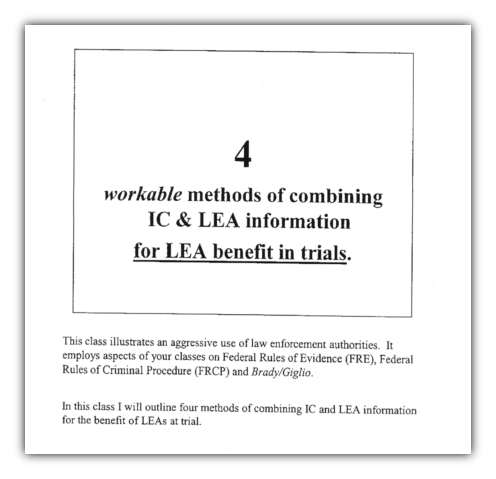 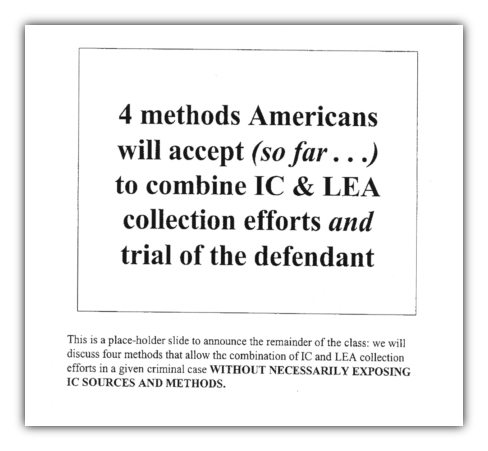 But the first of these certified, “acceptable” methods is redacted entirely. 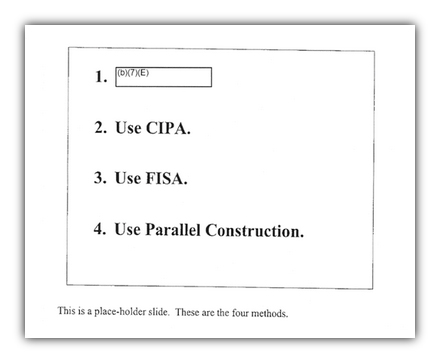 To reiterate, the DEA redacted the name of a method its trainers and legal auditors deemed not only constitutional but also palatable to the public.

As its position on the list suggests, this shielded tactic is “tips and leads paradigm” that is the “primary methodology for protecting [intelligence community] information that is shared with [law enforcement agencies].”

The DEA scrubbed all corresponding mention of the first method throughout the entire document release by invoking FOIA exemption b(7)E, which protects law enforcement techniques from disclosure. Redactions extended even to a separate presentation devoted to the constitutionality of this method. 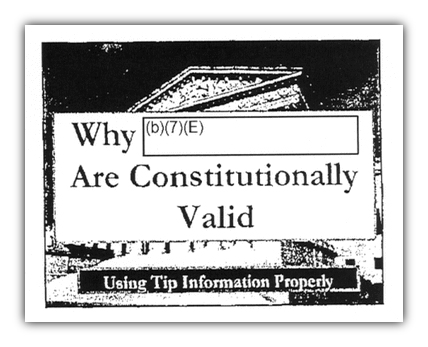 As with parallel construction, agents apparently pair this unknown tactic with routine traffic stops and drug dog sniffs as pretext for arrest. 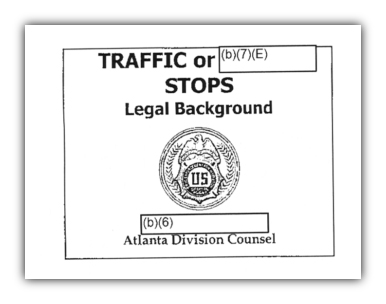 The only details on this mysteriously legal tactic come from a handful of Supreme Court case references. Legal justifications include Whren v. United States, which established that the actual aim of officers in making a traffic stop is of no consequence so long as they have independent justification to pull a motorist over.

The oldest reference is to a 1938 Supreme Court decision, Scher v. United States. 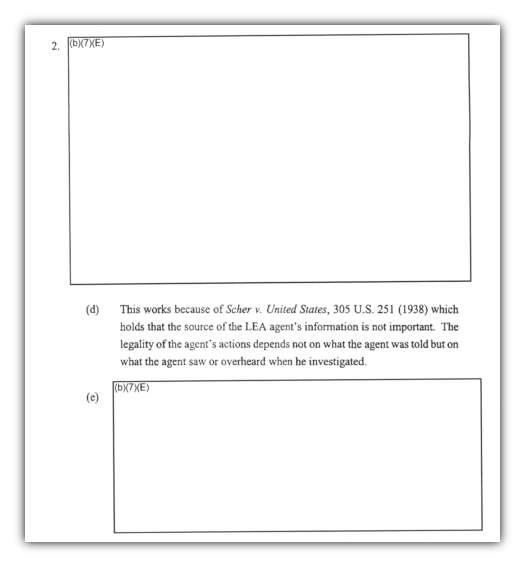 Beyond these case law references, there are no details of how this “primary methodology” of shielding classified programs integrates into DEA investigations.

The remaining three methods help to flesh out what the mystery tactic is somewhat, if only by differentiation. The second method leverages provisions in the Classified Information Procedures Act (CIPA) to limit the introduction of classified intelligence as evidence, or its release to the defense in discovery. Under CIPA, a judge may review classified information to determine its relevance to the case before the trial begins. If the judge deems the information relevant, CIPA allows the government to provide the defense with redacted materials or unclassified substitutes that would not divulge sensitive sources or intelligence collection methods.

The third method invokes the Foreign Intelligence Surveillance Act (FISA). While the DEA did not redact references to FISA as it did with the first method, all operational details have been withheld. The fourth acceptable method reviewed in the training module is parallel construction, as first uncovered by Reuters last August.

But the first and apparently most broadly used of these tactics remains a secret. I have requested a Vaughn index for the parallel construction request to better understand the redactions invoked. Until additional details come to light, the American public that the DEA claims would accept this hushed method remains approvingly uninformed.

Read the manual embedded below, or on the request page.