In the wake of the September 11 attacks, the mandate and powers of the United States’ multiple border protection and customs agencies broadened under the auspices of the newly created Department of Homeland Security.

DHS reshuffled several of the enforcement bodies put under its purview into one elite unit: Homeland Security Investigations. 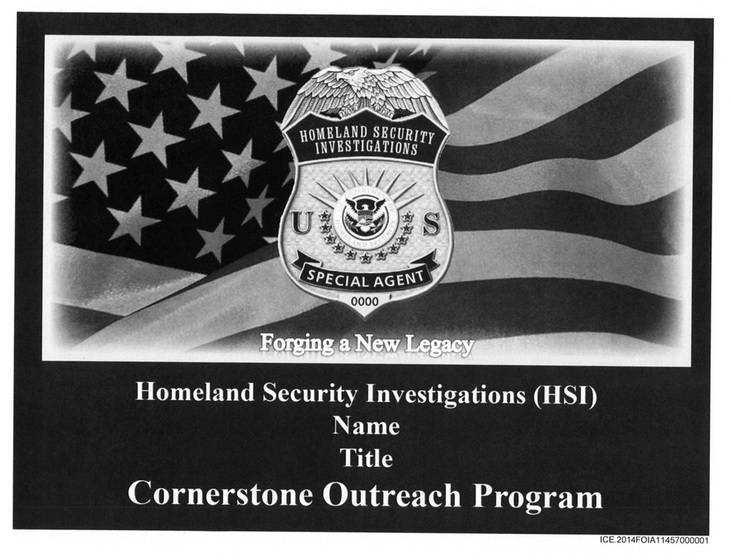 “By combining the statutory customs and immigration authorities of the legacy agencies, ICE-HSI Special Agents have unique and broad investigative authority to identify, disrupt and dismantle criminal enterprises that exploit our economy and threaten the security of the United States,” a HSI training slideshow recently released to MuckRock explains. 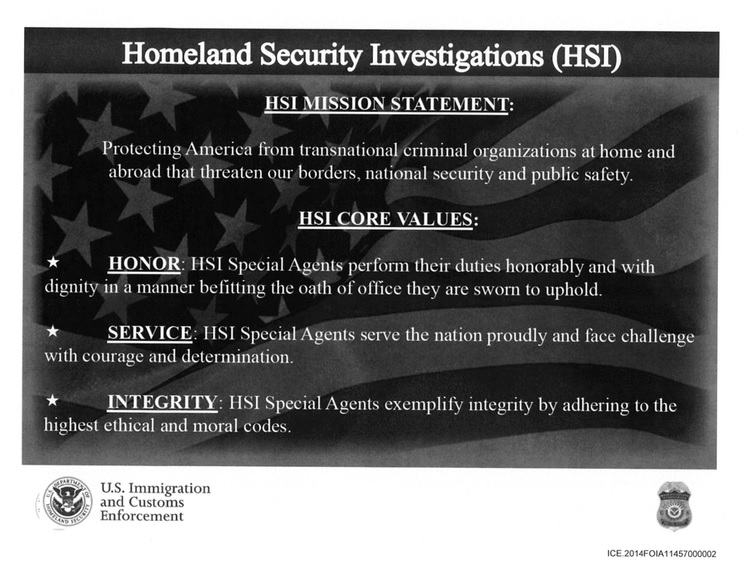 HSI emerged as the investigative arm of Immigration and Customs Enforcement (ICE) in 2003, its hybrid authority drawn from functions previously assigned to the US Customs Service and the Immigration and Naturalization Service.

When the above training presentation was drafted – sometime after 2012 – HSI had 265 offices in the US and dozens of offices around the world. The exact number of international offices is either redacted or not included in the presentation. 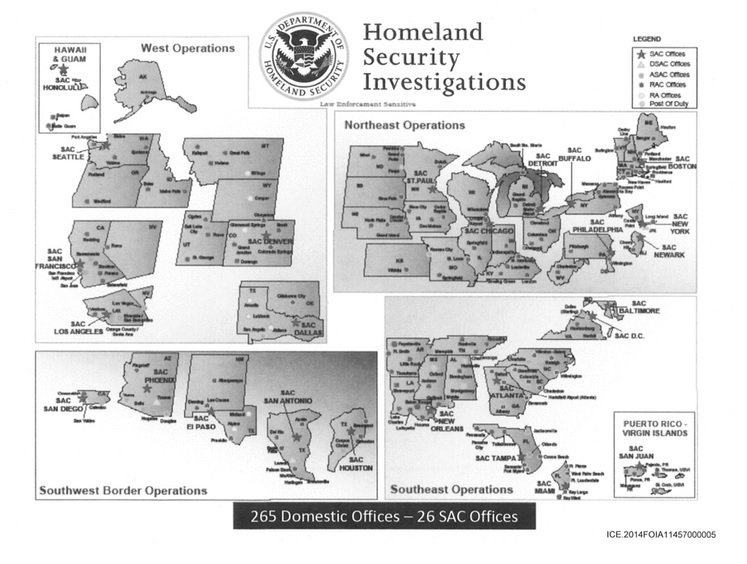 The agency’s footprint grew to fit its enforcement powers, and HSI established at least one office on every continent save Australia and Antarctica. 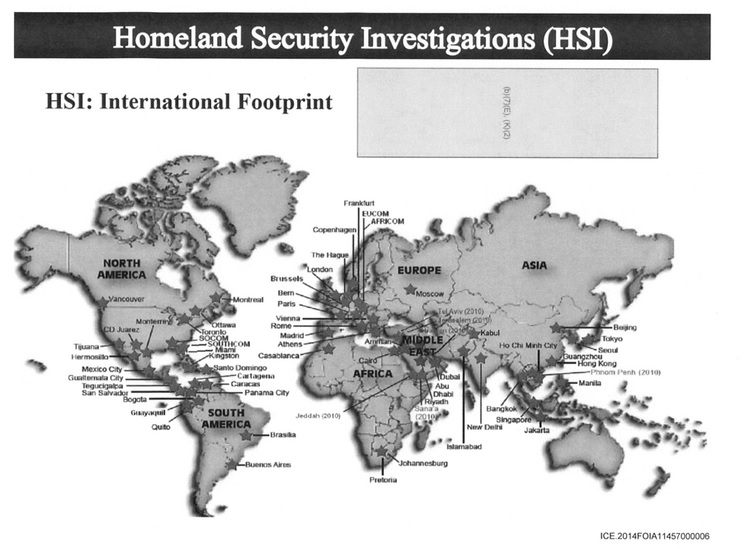 HSI agents have “the authority to investigate any federal crime,” and “HSI is the only law enforcement investigative agency that has border search authority, full access to [Bank Secrecy Act] reports and exclusive access to trade data,” according to the presentation. 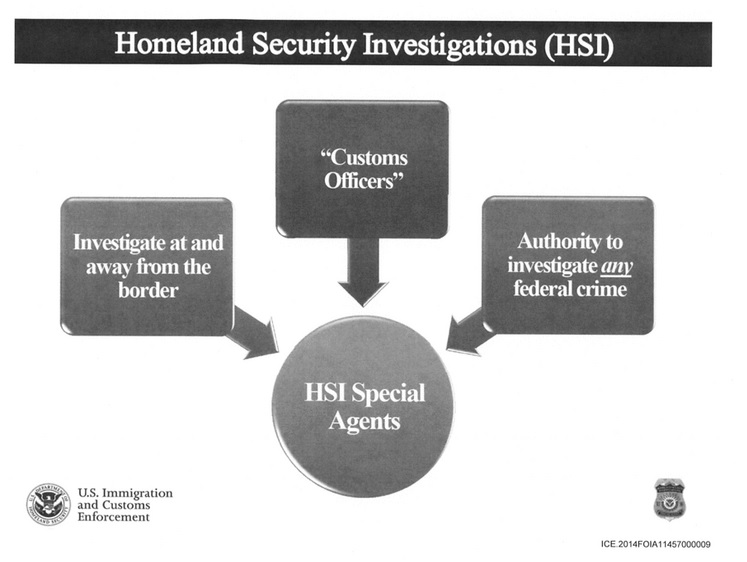 Although the agency also investigates smuggling, drug and retail crime, the majority of the training presentation is devoted to financial crimes.

“In the past two years, HSI has expended 3.4 million investigative hours on financial investigations resulting in the seizure of over $2.3 billion in currency and monetary instruments,” one slide reads.

In fiscal year 2012 alone, the agency arrested 2,420 people for financial crimes, indicted 1,590 of them and convicted 1,160, according to the presentation. 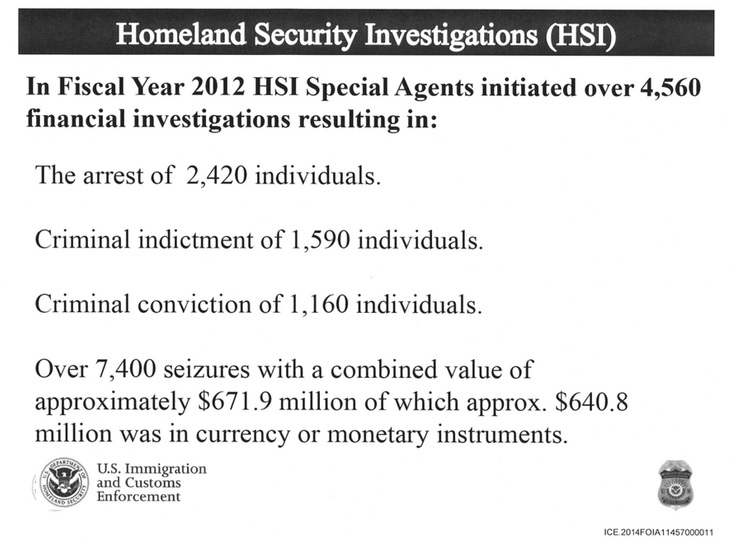 HSI’s focus on the financial aspects of crimes – like drug and human trafficking – that had traditionally been investigated at the borders, has led to close partnerships with financial institutions under a program called the “Cornerstone Outreach Initiative.”

“There are more than 250 dedicated Cornerstone Special Agents assigned to HSI’s field offices who work as liaisons with the private sector,” according to an HSI document released along with the presentation. “These Cornerstone liaisons share trends and ‘red flag’ indicators of criminal activity with the private sector through outreach efforts. Since inception, HIS Special Agents have conducted more than 13,370 Cornerstone outreach and training presentations to approximately 291,000 participants worldwide.” 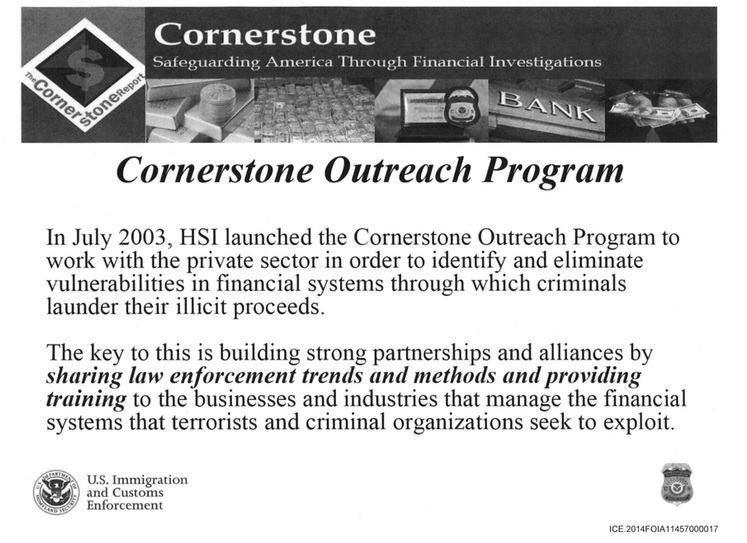 The agency’s authority to track criminal proceeds through the financial systems led to a $1.9 Billion fine of banking giant HSBC in.

The investigation eventually uncovered that the failure of HSBC’s internal controls had allowed Mexican drug cartels to launder at least $881 million through the bank’s US branches. 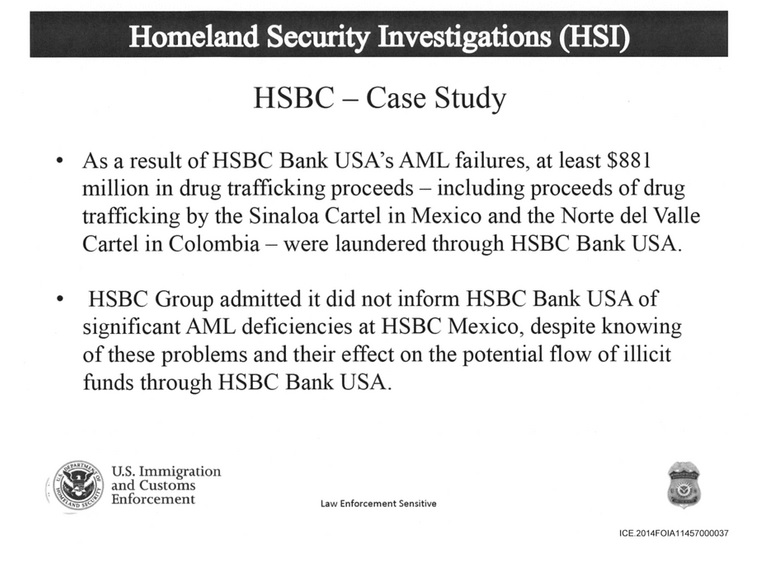 Read the full presentation embedded below, or on the request page: