Police Surveillance: Facial Recognition Use in Your Backyard 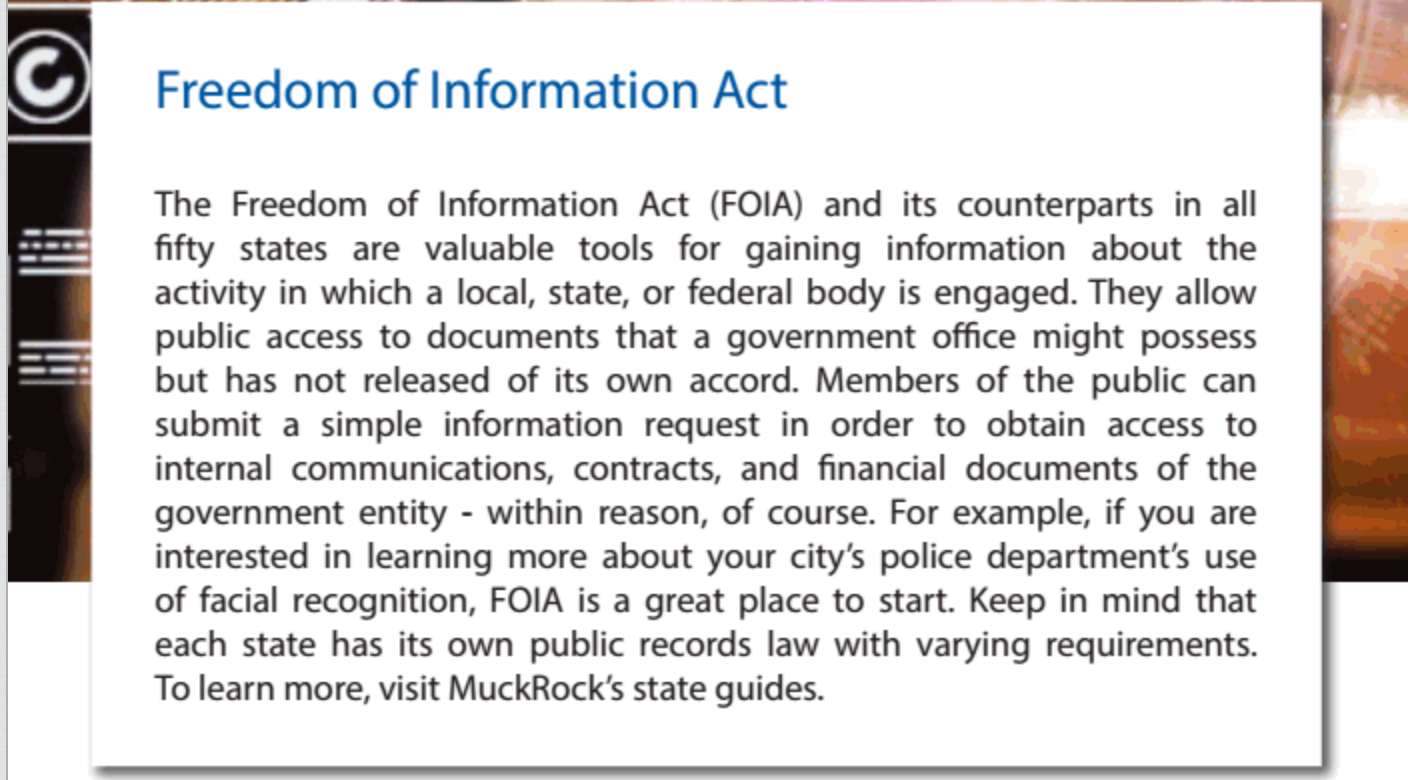 You can find our guide here.

These algorithms are far from perfect, susceptible to human bias, and can flout expectations of privacy and due process, resulting in serious implications for and violations of the First and Fourth Amendments. There are few laws restricting the use of facial recognition technology, allowing police agencies to implement it however and wherever they see fit. As law enforcement gains new capabilities, it is important to ensure that their acquisition and use are transparent and regulated. Facial recognition has already been used at protests to identify and arrest people, creating a chilling effect on freedom of assembly and speech. Furthermore, if an algorithm were to misidentify a suspect, the justice system could investigate, arrest, and even convict the wrong person, violating individuals’ right to be free from unreasonable search and seizures. Currently, there is no consensus from the scientific community on how accurate facial recognition needs to be for it to be admissible in court, potentially depriving defendants of a fair trial.

In our search for records we did not focus solely on which police departments purchased the technology. Instead we also sought records related to training materials, MOUs and information about the level of access other police departments have to these agencies’ data. We endeavored to learn more about the public’s informed consent about the purchase of this technology as well as data retention policies.

Once these requests were sent and responded to, we examined the data to answer ten questions pertaining to these agencies use of facial recognition and facial detection as well as the current scope of its program. You can explore our data here.

Records on Clearview AI reveal new info on police use

It’s likely most Americans have never heard of Clearview AI, Inc., but many still have a good chance of being in the company’s massive facial recognition database.

“Police Surveillance: Facial Recognition Use in Your Backyard”

Across the country, facial recognition technology is being quietly acquired and used by government agencies of all sizes, but the full extent of police departments and agencies accessing or using the technology remains unknown. MuckRock and Open the Government want to change that.

Is your local government using facial recognition? Use our guide to file your own FOI request and find out.

MuckRock and Open the Government sending public records requests about facial recognition technology to hundreds of police agencies across the country. There’s lots more to do, however, so we put together a guide on doing your own investigations.

Freddy Martinez sent this request to the City of Albany Police Department of Albany, NY

Freddy Martinez sent this request to the Metropolitan Police Department of Washington, DC

Freddy Martinez sent this request to the Naperville Police Department of Naperville, IL