Central to the President Donald Trump impeachment is a decision made during the summer of 2019 to withhold military aid to Ukraine. But emails from the Office of Management and Budget that could illuminate what the White House knew and when are being withheld behind a wall of black bars. We want your help demanding transparency.

In a December response to a Freedom of Information Act request from the Center for Public Integrity, CPI received documents about the president’s Ukraine decision.

What did they include? Unfortunately, a whole lot of ▇▇▇ ▇ .

We know these emails contain much more. In early January, JustSecurity released leaked versions of some of those same emails, revealing some of the unredacted contents and bolstering the case that the government should release the full documents for the American public to read.

“The public’s right to know the contents of emails between the Department of Defense and the Office of Management and Budget about the holdup of military aid to Ukraine last year is a matter of national urgency,” said Susan Smith Richardson, CEO of the Center for Public Integrity.

“This week, the website Just Security published passages of the unredacted emails, the very ones the Center for Public Integrity has been seeking in court. We are still seeking them, but we are also calling on the Defense Department and OMB to release these emails so the American people and our lawmakers can read for themselves how the administration handled an issue at the center of President Donald Trump’s impeachment.” 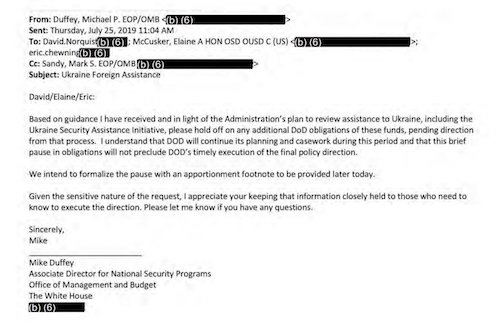 “Clear direction from POTUS to continue to hold,” Michael Duffey, associate director of national security programs at the Office of Management and Budget (OMB), told Elaine McCusker, the acting Pentagon comptroller, in an Aug. 30 email, which until now had only been available in redacted form.

What else is in those emails? CPI is taking the highly-redacted response to its FOIA request to court to find out.

You can help demonstrate the urgent and important public interest in these documents. Add your name below to become a signatory on CPI’s letter demanding transparency. You can read the letter here.

Image courtesy of the Center for Public Integrity

Win FOIA prizes and demand Treasury transparency in our latest collaboration with the Center for Public Integrity!