Three years ago, Massachusetts legislators revised the state’s public records law with the ostensible goal of increasing access. And yet, the law is still considered one of the most restrictive in the country - in no small part owing to the fact that the Commonwealth remains the only state in which all three branches of its state government are exempt from disclosure.

The judiciary, the legislature, and the governor’s office all bar access to their information and lawmakers have no foreseeable plans to unlock them. Despite the blanket exemption, the Governor’s office seems to bend the rules for some records requests.

According to the Office of the Governor, requesters are encouraged to submit their requests over to his office, making no mention of its public records law exemption. The governor has its own form to submit requests and a designated records access officer to facilitate them. Yet, it is the “voluntary practice” of the Office to consider and to respond to public records requests on a case-by-case basis.

We reached out to the governor’s office to find out more about their process, but they did not comment by the time of publishing.

Although not subject to state records law, some MuckRock users have had luck in getting responses. In 2016, user Andrew Quemere requested “all written and electronic communications with General Electric.” Months later, the Governor’s office released a handful of email records detailing the communication between GE and the Massachusetts Governor.

However, a 2018 request from Joey Del Ponte for records regarding the controversial conservative pastor (and one-time gubernatorial candidate) Scott Lively was met with a denial, with a footnote outlining the “voluntary practice” of the Office. 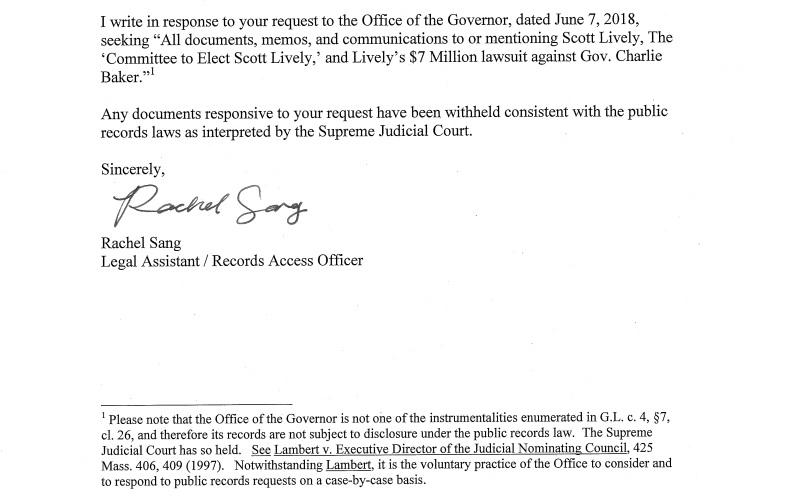 Earlier this year, a request to the governor’s office by Boston Globe reporter Todd Wallack was never acknowledged. As a result, Wallack appealed to the state’s Supervisor of Records. In response, the SPR cited case law and Attorney General opinions to note that documents in the possession of the governor’s office are not disclosable records under current public records law. 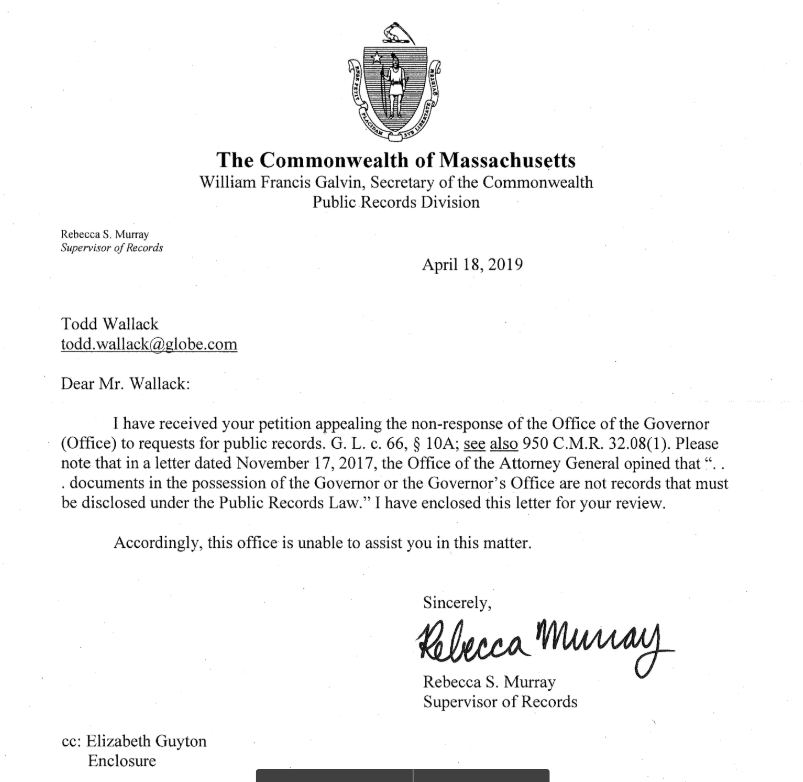 Earlier last year, a legislative commission was charged with looking at whether to extend the law to the governor’s office in Massachusetts. The commission extended its deadline for a year, missed the new deadline, and then disbanded without any recommendations.

Do you have your own public records struggle in Massachusetts? If so, let us know via the form below.

Image via Hanscom Air Force Base

Andrew Quemere sent this request to the Mayor's Office of Boston, MA