The new year is in full-swing, and public records advocates are getting ready for another year of FOIA and state records law fun. The end of the year usually marks an eventful time full of joy, rest, and relaxation. Yet some jurisdictions decided to make some changes at the eleventh hour, both for the better and the worse. But don’t worry, we compiled a list of FOIA related changes that happened over the holidays so you don’t miss a thing.

Here’s a look at what jurisdictions were up to over the holiday break:

The Department of the Interior

The Department of Interior has proposed a new set of FOIA regulations that amend current rules. Among the new guidelines, the department proposes to “not honor a request that requires an unreasonably burdensome search.” What exactly constitutes as a “burdensome” search is unclear, but this type of language would give the department leeway to deny any request they feel falls in this category. Fortunately, these rules are not set in stone. You can share your comments and concerns on the proposed regulations by January 28, 2019. 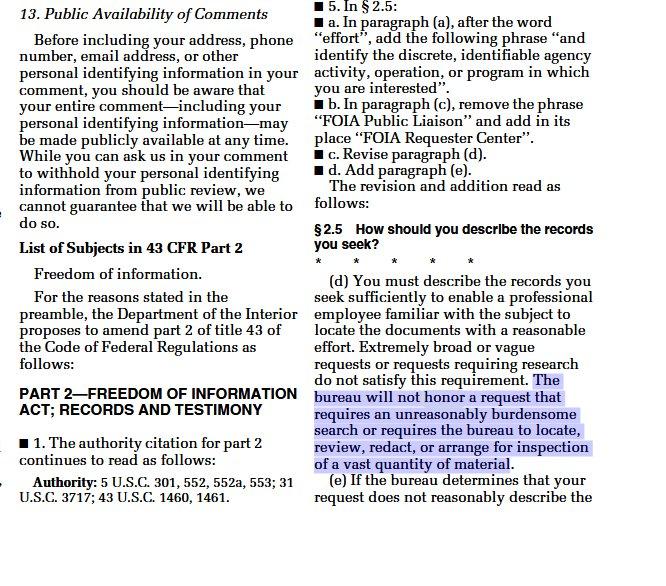 In better news, the United States Capitol Police announced that it would post its weekly arrest summary online. This is a historic move as the USCP is infamously exempt from FOIA and is known for its lack of transparency. The move comes after a petition authored by Demand Progress urged the USCP to publish its arrest information. However, the petition was never submitted to the USCP.

Its a big year for California as new police transparency laws take effect this year. But, not everyone is happy in the Golden State. The San Bernardino County Sheriff’s Employee’s Benefit Association attempted to attempted to block access to existing records of police misconduct and use of deadly force. Luckily, a state Supreme Court this week denied the request. However, the Association’s actions show the discontent some agencies feel towards the new laws.

Similarly, the Long Beach Police Department made a dicey move prior to the new year and new 2019 laws.The police department has destroyed 23 years worth of internal affairs records. According to the Press-Telegram the agency claims the destruction of records was “not prompted by the new transparency laws, but acknowledged some of the documents may have been subject to it.”

The same goes for the City of Inglewood as their City Council voted last month to shred more than 100 police shooting and internal investigation records. Furthermore, Inglewood Mayor James Butts defended the move calling allegations to beat the clock before the new laws hit, “ridiculous.” However, it is unclear if the Inglewood Police Department has in fact destroyed records.

Public records advocates in Hawaii call a victory as the state’s Supreme Court ruled the ‘deliberative process privilege’ in the state has allowed agencies to deny records requests dating back to 1989. Many in the state say the “vague term” was often overused and abused in the access to public records. The landmark ruling was made in large part by Civil Beat Law’s 2015 lawsuit to get access to budget documents.

Louisiana’s Attorney General Jeff Landry is arguing that public records law doesn’t apply to out-of-state requesters. According to The News Tribune the AG’s fight comes after a lawsuit against him for his slow response to turn over records to a requester in Indiana. Currently, nothing in Louisiana’s Public Records Law bars access to out-of-state requesters or limits the scope to only Louisiana residents.

Minnesota hit the headlines this week as a new ruling made a Mayor’s Facebook page exempt from public records, despite the fact that despite the fact that he may use it to write about city issues. The ruling comes after the City of Victoria asked the state if the City’s response to a records request was valid under the state’s records law. In the official advisory opinion, the state agrees that the Facebook page used by the Mayor of Victoria is not public record as it was never created by the City nor is it maintained by the City. The opinion clarifies a grey area within public records law and social media records.

Are there other public records story we missed over the holidays? Let us know!

Image by DrTorstenHenning via Wikimedia Commons and is licensed under CC 1.0