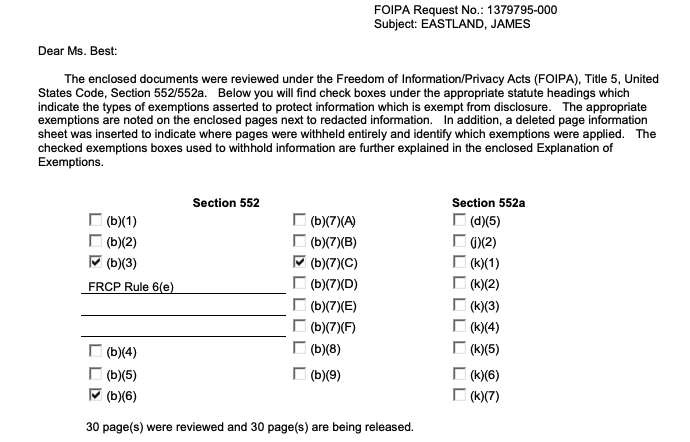 The administrative memo from 1955 written as a follow-up to an inquiry from the head of FBI’s Domestic Intelligence Division about claims by Eastland about Communist spy rings in the United States that had yet to be uncovered. As a result, one of Director J. Edgar Hoover’s senior aides spoke with J.G. Sourwine, the aide to the Senator. 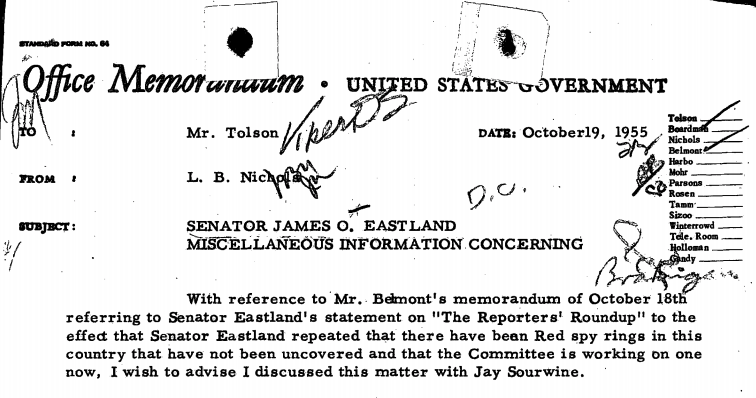 According to the memo, Sourwine reported that Eastland, who would become Chairman of the Senate Judiciary Committee just months later, had just made this up. According to Sourwine, the Senator went into an interview for The Reporters’ Roundup “wholly unrehearsed and spoke extemporaneously.” Sourwine winced when he heard Eastland allege there were yet-to-be uncovered spy rings because the committee had neither knowledge or evidence that any existed. Sourwine’s “only explanation” was that the Senator had confused some Times reporters with a spy ring. Sourwine suggested that the Senator had been thinking of the Senate Subcommittee on Internal Security’s investigation of the reporters “and associated this ring with a spy ring.”

The Senate Subcommittee on Internal Security, then called the Eastland Subcommittee after its Chairman, was investigating “alleged Communist infiltration of the press, radio and television.” According to the Times, this investigation specifically targeted them for their opposition to Eastland’s policies, including McCarthyism. The Times published an editorial defending the reporters, saying “we have judged these men, and we shall continue to judge these men, by the quality of their work and by our confidence in their ability to perform that work satisfactorily. It is our own business to decide who to employ and not employ. We do not propose to hand over that function to the Eastland subcommittee.” 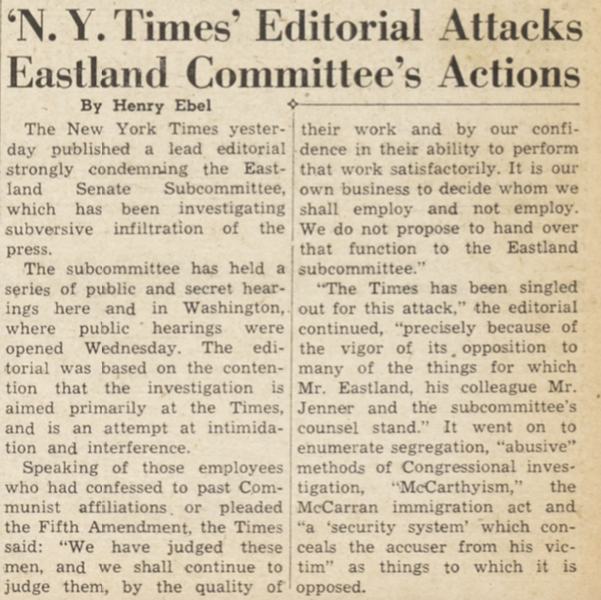 Hoover’s senior aides were happy to close the file on the issue, apparently either unconcerned or unconvinced of the Eastland’s accusations against the Times, despite the Bureau playing such a large role in McCarthyism that it could have more properly been called Hooverism.

A new request has been submitted for the lengthy administrative file the memo is drawn from. Until the FBI responds, you can read the full document below, or more on the request page.