While the 2016 reforms to Massachusetts Public Records Law brought some key changes, such as a cap on copying fees and agency response times, Bay State requesters can still face hefty financial barriers to getting their records.

Generally, fees are assessed by charging requesters search, review, and copying fees. While the reforms tackled the latter - bringing copying charges down to five cents a copy, as opposed to the 20 or even 50 cent charge per page agencies would ask for previously - search and review charges remained unchanged. Those charges are assessed by finding the hourly rate of the lowest possible paid employee to fulfill the request. That means that charges vary depending on the person responsible for processing your request. If the lowest possible paid employee to do the job makes $50 an hour, then you would be charged $50 an hour for search and review of the documents you requested.

In 2016, MuckRock’s Caitlin Russell requested emails between then, Acting Governor of Massachusetts Jane Swift and Middlesex District Attorney Martha Coakley on the case of Gerald Amirault. While, the Middlesex County District Attorney’s Office found 30 to 40 boxes of records responsive to Russell’s request, the agency said the fee would “likely be hundreds of dollars,” which the Office made clear it would decline to waive.

At a $25 per hour rate to search and review documents and a permitted charge of five cents a copy, Russell’s request was bound to hit the thousands. The request was eventually withdrawn.

With fees determined on a case-by-case basis, it can oftentimes be tricky to gage the cost of a request. Sometimes, fees will come back free of charge for the requester, and other times requests will turn out to be more expensive than anticipated.

However, records officer can help requesters facilitate requests and lower costs by asking questions about the information sought after.

“The Department of Correction assists requesters in narrowing the scope of their requests to provide the information sought at minimal cost,” said Deputy Director of Communications for the Massachusetts Department of Corrections, Jason Dobson. “The records officer will ask simple questions that are pretty general and ask what the [requester] is looking for to reduce those costs.”

MuckRock user Sarika Ram filed a request to the state’s DOC for reports and audit documents earlier this year. The agency was able to locate a series of records responsive to the request, but charged a hefty $1,104.80 to process the request.

On top of the high fee, the DOC noted that it wouldn’t start processing the request until they received a check for payment in full.

Despite the high fee, agencies like the DOC and the Massachusetts Bay Transportation Authority, say that are just “complying with the law.”

Agencies like MBTA are notorious for producing high fee estimates. MuckRock user Katonio Butler was given a $550 charge for 771 emails between MBTA and MassDOT with specific key terms.

MBTA estimated that it would take 21 hours to retrieve and review documents at an hourly rate of $25. Plus, it would charge an additional $25 to upload the emails on a storage device. 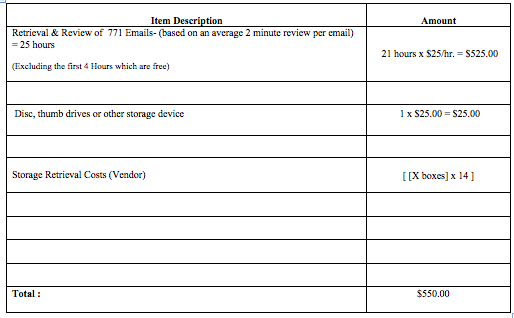 Earlier this year, MuckRock surveyed its data to gage the costliest fees in each state. Overall, Massachusetts highest fee came at $312,846.60 in 2013, before the public records overhaul. If you’ve gotten a high fee that that since the reforms kicked in, be sure and let us know via the form below.

Image via Goodfellow Air Force Base