We’ve previously written about General Smedley Darlington Butler, the decorated general who, after being forced into retirement by Herbert Hoover for denouncing Benito Mussolini, helped stop “The Business Plot” in 1933, a conspiracy to recruit American veterans into the equivalent on an American Nazi Party. While that plan failed, that same year saw the establishment of an explicitly fascist political organization in the United States: the Friends of New Germany, later rebranded as the German-American Bund.

The leader of the Bund was Fritz Kuhn, a German-born naturalized citizen and employee of the Ford Motor Company, who fancied himself the American Führer. At a rally organized by Kuhn at the Madison Square Garden in 1939, thousands of people wearing brownshirts gave the Nazi salute to the American flag, and “the Star-Spangled Banner” was immediately followed by a performance of “Das Deutschlandlied.”

However, Kuhn wasn’t long for the organization, or for the U.S. He was convicted on embezzling a paltry $1,217 from the Bund in late 1939, and sentenced to two years in prison. Kuhn didn’t let a little thing like incarceration stop him, though - according to FBI documents, Kuhn conspired with a 52-year-old man named Charles Harman, who was at the tail end on a ten year sentence for forgery, to extort money from Helena Rubinstein a “wealthy toilet preparations owner,” from Poland. 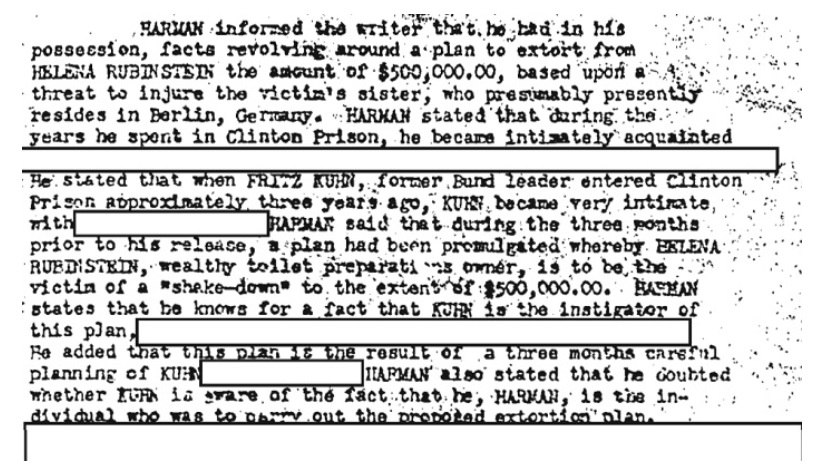 According to FBI files, the duo were planning to send the woman (who happened to be Jewish) - a letter spackled with swastikas, threatening to have her sister who lived in Germany killed unless she coughed up cash.

According to the file, Rubinstein never actually received the letter. In fact, upon leaving prison, Harman took the plan straight to the the FBI’s New York field office. While he said it was because he wanted to “be of service to his country” …

interviews make it clear Harman felt he might be getting played by Kuhn, whom he suspected was going to tip the proposed victim off about the scheme in hopes that official would take that act of kindness toward an elderly Jewish woman into account when he came up for parole.

Besides, Harman had a steady job lined up after his release, and he wasn’t going to throw that away for some Nazi.

So, the plan was a bust, and in 1943 Kuhn had his American citizenship revoked, and he was deported in 1945. A few years later, the would-be Führer was dead.

You can read part of Kuhn’s FBI embedded below, and rest on the request page.

Image by via Wikimedia Commons