The Federal Bureau of Investigation has been on a hot streak of terrible FOIA responses lately, and a series of heavily-redacted releases from this week shows that things are even worse when the FBI is dealing with FOIA requests about how the FBI handles FOIA requests.

Back in early 2017, the FBI changed its policy regarding FOIA requests, announcing they would no longer accept email submissions, instead requiring requesters to use a cumbersome portal with numerous limitations. The FBI declined to announce this change through any public forum, instead slipping notices into auto-responses to existing FOIA requests. In response to these changes, MuckRock filed a number of FOIA requests to learn about the new policy and the new portal. Months later, the FBI responded to one request with heavily redacted emails, effectively denied another request, and outright rejected a third request by claiming that people would use information about their new FOIA portal to circumvent the law and obstruct criminal investigations and prosecutions.

In response to the first request, the FBI released 24 pages of emails that are almost entirely redacted. One heavily redacted email appears to claim that proper FOIA and Privacy Act request language falls under the Bureau’s “deliberative process.”

FBI withholds all information about the switch to their #FOIA portal, including what language should be used. pic.twitter.com/ojgQBTBNkW

Virtually the only portions of the emails that are unredacted are either form letter language sent to every requester and/or posted on the FBI’s website. A media inquiry is redacted in its entirety except to quote the author’s tweet (sent before coming out as transgender and citing a deadname), confirming that the public’s first notice of the FBI’s imminent change in how they accept FOIA responses came from MuckRock’s diligence, and not the FBI’s media relations or FOIA offices. 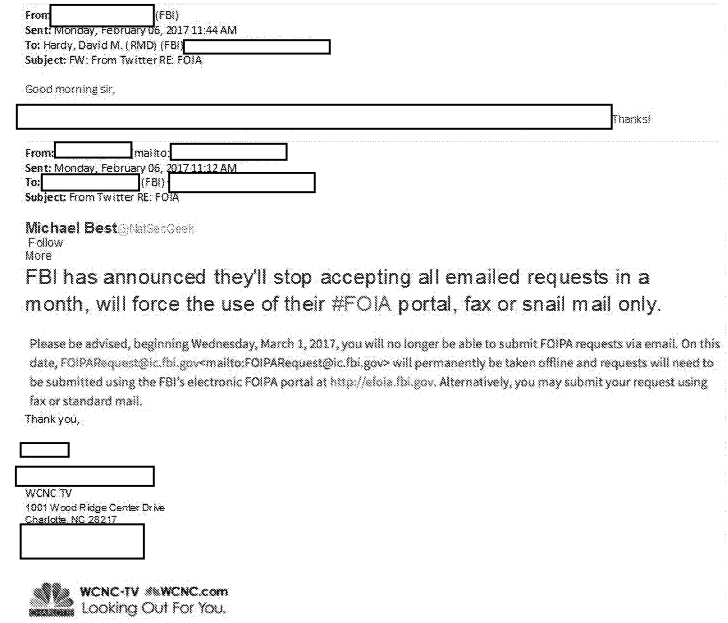 While the FOIA referred to above specifically requested written communications from three dates, the second FOIA was significantly broader and sought all written records regarding the policy change. The FBI responded by providing the same redacted emails, acknowledging it was a “preprocessed” request. While the scope and focus of the requests were significantly different, the Bureau took 21 months (over 30x the amount of time legally allowed) to ignore this fact. 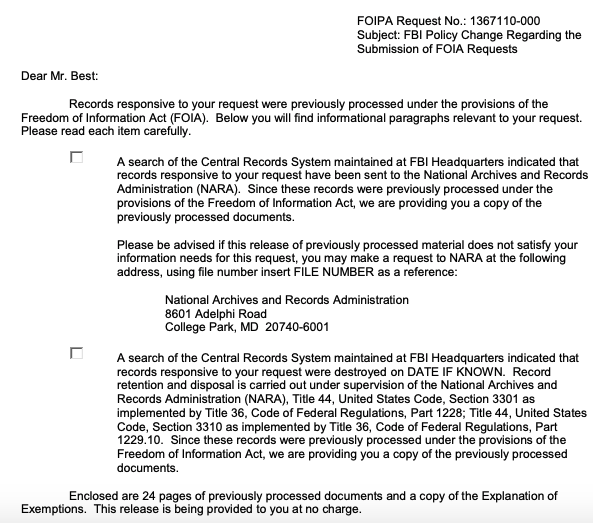 In September 2018, a third FOIA was filed, requesting materials related to and copies of the digital systems responsible for the FBI’s eFOIA portal. The FBI responded by rejecting the request in its entirety, claiming that the materials “would disclose techniques and procedures for law enforcement investigations or prosecutions, or would disclose guidelines for law enforcement investigations or prosecutions if such disclosure could reasonably be expected to risk circumvention of the law.”

FBI circumvented #FOIA laws by absurdly claiming that disclosing info about their #FOIA portal "could reasonably be expected to risk circumvention of the law" and the obstruction of criminal investigations. pic.twitter.com/Nem63fIQwM

By asserting the b(7)E exemption, the FBI claimed that information about how they receive, store and process FOIA requests would allow people to violate unnamed laws and/or obstruct and circumvent law enforcement investigations and/or prosecutions. It is hard to see how information about FOIA processing (which could be used to challenge some of the Bureau’s claims about the “actual” costs of processing and duplicating records) could result in people circumventing the law, unless the Bureau planned to investigate and possibly prosecute people for filing FOIA requests. While this would not be unprecedented, it remains wildly improper.

The matter has been appealed to the Department of Justice’s Office of Information Policy, and a lawsuit to compel the Bureau to fulfill their duties under FOIA is currently under consideration. In the meantime, you can view the heavily redacted emails below, or consider the irony that the Bureau is circumventing FOIA laws by claiming information about how they handle FOIA would result in members of the public circumventing the law.