Update: Though the Agency has still not responded to our emailed inquiry after over a week, the CIA informed OGIS, who then informed us, that “the email address, cia_foia@ucia.gov, is only used to communicate with the public and should not to be used to submit FOIA requests. To submit requests, you can mail the request to the address given, send a fax, or use the portal.”

However, the CIA’s FOIA website still states that the Agency “cannot receive or respond to e-mail messages” regarding requests. No explanation for this discrepancy has been given.

Further Update: A day after this update, the CIA responded via the cia_foia@ucia.gov, email and reiterated the same clarification made to OGIS. No other clarification was given.

Somewhat infamously, the Central Intelligence Agency’s FOIA office has for years relied on a single fax machine (along with a vaguely cumbersome portal), prompting jokes and criticism regarding the otherwise cutting-edge CIA insistence on the ‘80s technology instead of email. The system caused headaches internally as well, with the Agency routinely complaining about the number and size of faxes that they receive. So why, in 2016, when the CIA finally implemented an email account for FOIA for requesters to use, wasn’t there greater fanfare in FOIA community? Because the CIA never told requesters about it.

Even searching the Agency’s website for the email address turns up nothing. 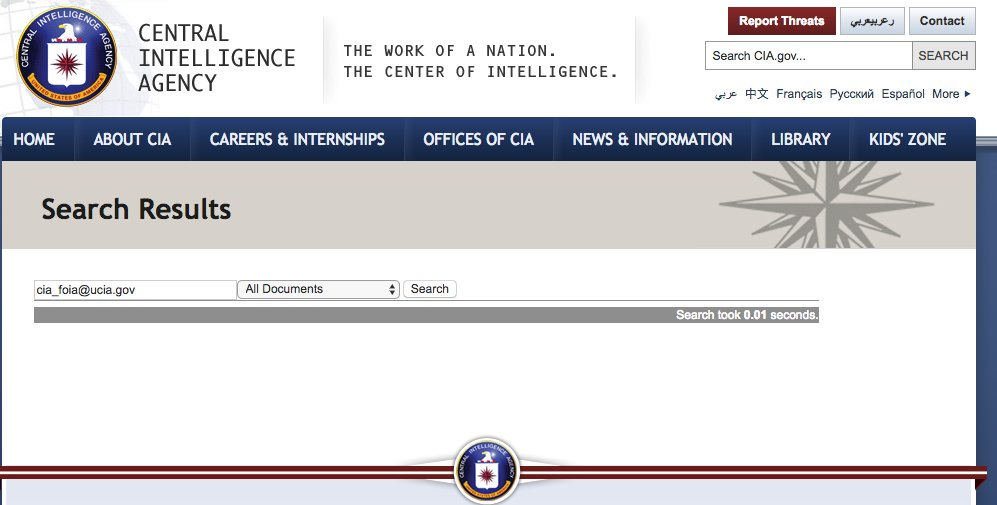 The email address, cia_foia@ucia.gov, was created in 2016 (after a year of planning) for requesters to use to contact CIA directly. The Agency didn’t make a public announcement of this or reveal the fact outside of the Chief FOIA Officer’s annual report. A search of a number of FOIA response letters from the Agency shows that they didn’t routinely disclose the email address’ existence to requesters, despite (if not because of) the ubiquitous use of and massive convenience associated with email compared to fax machines and snail mail.

The only other mention of it on the Agency’s website is in the report from the following year, adding that requesters can use it to seek “additional information not found on CIA.gov“ and that the address is staffed during “normal business hours.” 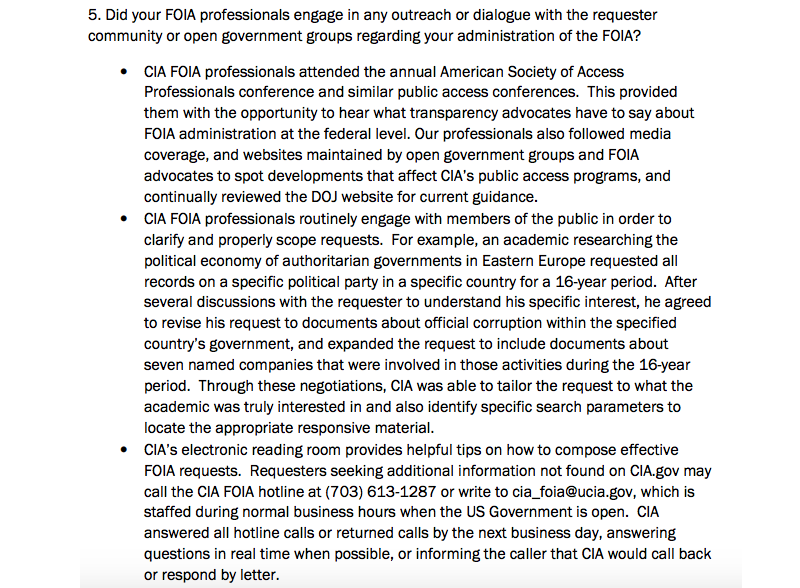 As mentioned above, even the built-in search for the CIA’s website turns up no instances of the email address. Prior to a tweet alerting people to the email address’ existence, even Google was only able to find it in the two reports and a court document. A search of DocumentCloud proved similarly fruitless, producing only a trio of hits from the same court case. 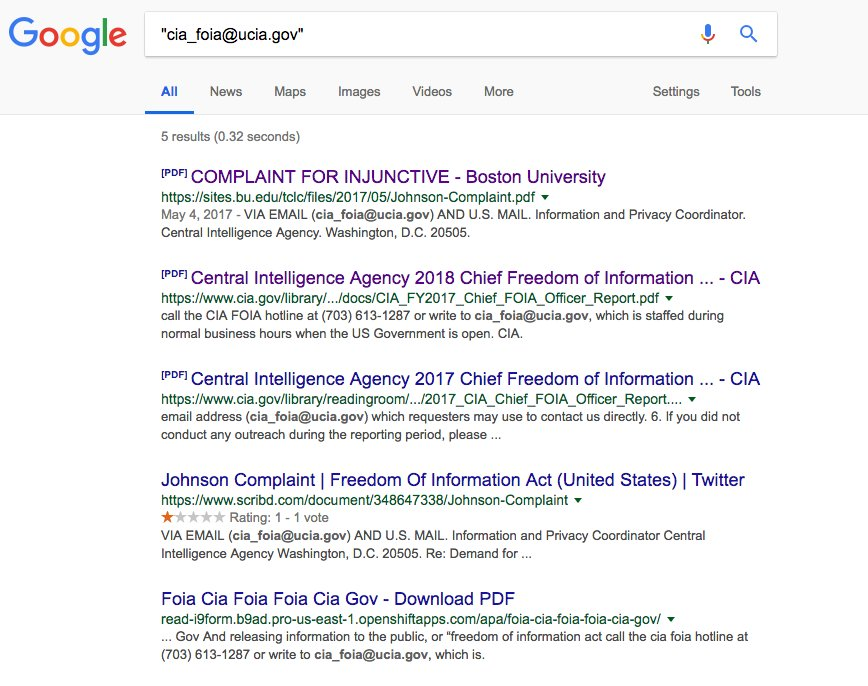 The scope of the email address’ use and purpose isn’t clear. According to the Agency, the year they launched the address they used it to correspond with “a requester via email and explained that the processing of her requests would be facilitated by combining them into one request.” In the court case mentioned previously, the email address was used for communications between the CIA’s FOIA office and a requester’s lawyer. It’s not immediately clear if the Agency will accept FOIA requests that are emailed to the office. An email asking the Agency if they accept FOIA requests submitted through, and an explanation for why not if they didn’t, was not answered by the time of publication. (This article will be updated if the Agency responds).

The fact that it’s part of the Agency’s outreach effort for FOIA requesters makes its repeated and systematic failure to inform the requesters about its existence not only ironic but deeply concerning. FOIA requests have been submitted for information on any efforts to promote the possibility of email communications that aren’t immediately apparent, along with the most recent 4,000 pages of emails sent and received from that address.

The 2017 FOIA Chief FOIA Officer’s annual report is embedded below.