Earlier this month, Insane Clown Posse fans marched on Washington D.C. to protest the FBI’s 2011 designation of Juggalos as a “loosely-organized hybrid gang.” However, Bureau files show that ICP first came on the FBI’s radar three years earlier, when they conducted a threat assessment of the annual Gathering of the Juggalos. 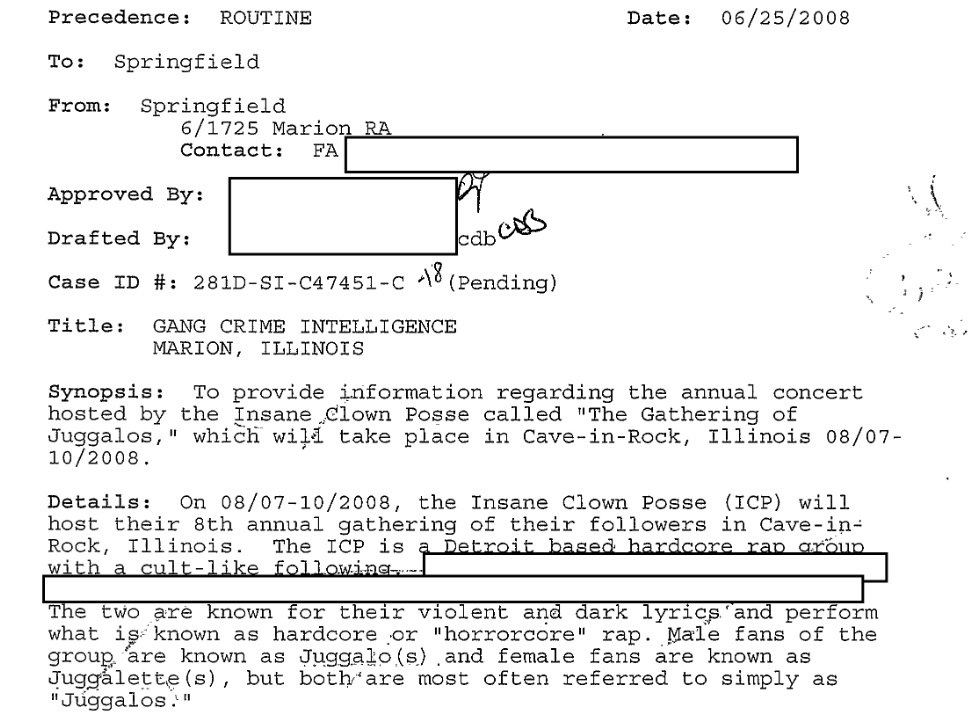 To compile the report, the FBI spoke to a confidential informant …

who, in addition to providing the valuable intelligence that the Gathering ‘gets rowdy” …

managed to sneak in the allegation that the family was engaged in a full-on turf war with MS-13.

If it’s news to you that that Juggalos were “holding their own” against “the world’s most dangerous gang,” then you’re not alone - ICP’s Shaggy 2 Dope has explicitly stated (emphasis on explicit) concerns about Family members being targeted by MS-13 as a direct result of their federal gang designation.

Attempts to source these claims have so far turned up short - the only evidence being the original FBI report itself - creating a paradoxical situation where Juggalos now appear to be in a gang war with MS-13 solely because the FBI said they were in gang war with MS-13.

Kind of a tough break for a folks who just wanted to listen to spooky music and drink sugary soda.

Read the full report embedded below and the rest on the request page.