Over the past few years, many Freedom of Information Act offices have worked hard to better engage requesters and help guide requests down the right path. Sometimes this means pointing out existing resources, or making sure they fully understand what a requester is asking for.

A recent DAPL-related rejection shows why that kind of dialog makes everyone’s life easier in the long run.

In March, I requested the assessment report on the potential impact of an oil spill of the Dakota Access pipeline for the crossing of Lake Oahe in North Dakota. Enviornmental impact assessments are fairly commonly requested and released records, and I thought it would be a useful compliment to some of Curtis Waltman’s Standing Rock reporting.

Instead, the entire Oil Spill Assessment request was rejected in full:

It was a particularly odd rejection since the agency had called me to say they thought they could quickly release the requested documents. It got even weirder when we found that the report I requested had actually been posted online for over a year.

It turns out there was some confusion about which report I actually wanted, according to FOIA processing notes released after a new request.

One thing I always recommend requesters do is be specific as possible, and one good strategy is to include links that help the agency understand which documents you are referring to.

I tried to do that in my request by linking to a previously released Army Corps of Engineers memorandum:

The assessment report on the potential impact of an oil spill of the Dakota Access pipeline for the crossing of Lake Oahe in North Dakota. This assessment is mentioned in the Department of the Army Office of the Assistant Secretary Civil Works memorandum to the Commander of the US Army Corps of Engineers. That memo can be viewed here:

Unfortunately, it looks like that link was blocked by the FOIA offices email software as a security measure, leaving the office somewhat in the dark: 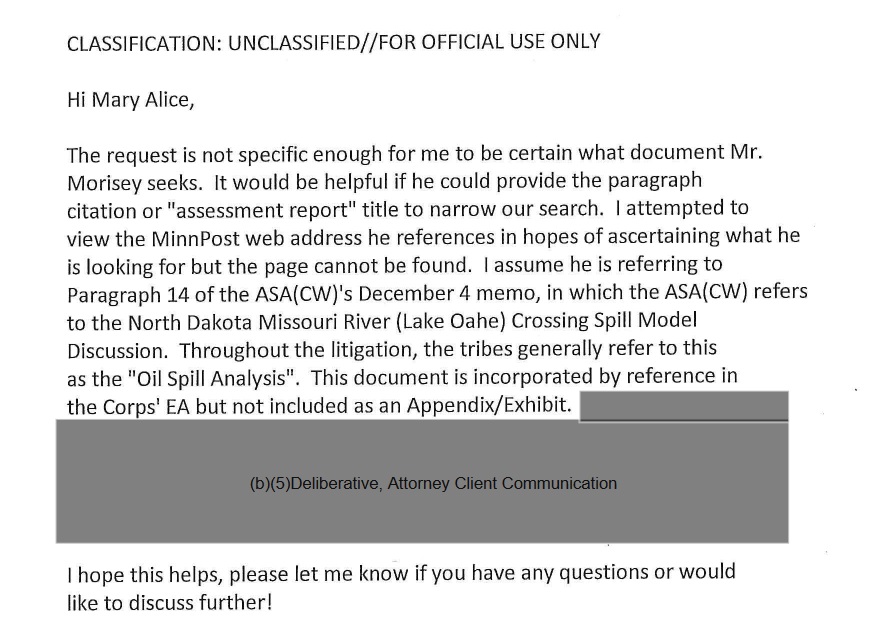 but apparently just went ahead without ever confirming the actual document.

I just checked the link again on my side and the link I provided works fine, but it does seem like there are a number of reports floating under the environmental assessment umbrella. It just seems like a case where an agency did a lot of background work, put in search effort, and then provided a non-response that leaves the requester in the dark while also not actually reviewing documents that could have been released.

They could have provided a lot more of the context, including links to responsive material that was actually available, rather than simply stating that knowing the potential outcome of an oil spill was information too sensitive to be trusted with the public.

Read the full processing notes embedded below, or on the request page.

Image by Shannon Patrick via Wikimedia Commons and licensed under Creative Commons BY-SA 2.0.