In 1968, the Federal Bureau of Investigation had a run-in with a young Joe Trento early in his reporting career. According to the FBI’s version of events, it didn’t go well.

A pair of memos from Aristotle Onassis’ file shows that the FBI felt Trento was so abusive and obnoxious that it justified hanging up on him and not returning his call when he called again. The second memo alleges that Trento claimed the FBI’s spokesman confirmed the existence of a letter despite the FBI having offered a clear “no comment” response that explained the Bureau’s files were confidential.

A memo dated November 27th, 1968 outlines the beginning of this encounter between Trento and the Bureau. The memo describes a call from Trento on the 25th, wherein Trento asked the FBI about an alleged letter from Hoover to the Maritime Commission about Onassis in the mid ’40s, with the Director allegedly saying “something to the effect that Onassis bore watching.” The FBI responded by saying that they couldn’t help Trento and that their files were confidential and for official use only. At this, “Trento became highly upset” and “demanded to talk to Mr. Hoover personally.” He was again told that “the FBI could be of no help whatsoever.”

Describing Trento as “quite youthful and inexperienced as a newsman,” the Bureau said he “became increasingly abusive” until the FBI felt it was necessary to end the call. After this, Trento apparently tried to call someone else at the FBI about the same information. This call went unreturned.

Based on the date cited by the caller, the Bureau was able to locate a copy of the letter. While it was written by the Director, the note to watch Onassis was clearly provided by an informant, and Hoover was merely relating the information. The Bureau’s memo ended by noting that they would “of course furnish no information whatsoever” to Trento or Worldwide Features.

A second memo, dated December 17th, describes some of the fallout. After a brief summary of the previous events, calling Trento “particularly obnoxious,” the memo explains that an issue of the National Enquirer, dated December 29th, included a copy of the letter and an article about it under the byline of Roger Langley. As described by the memo, the article alleged that “an FBI spokesman confirmed that such a letter existed and confirmed that it had a dossier on Onassis.” This was “nonsense” according to the Bureau, as the reporter had been told nothing. The copy of the letter in the Enquirer’s article the same letter the Bureau had located and which Trento had asked about. 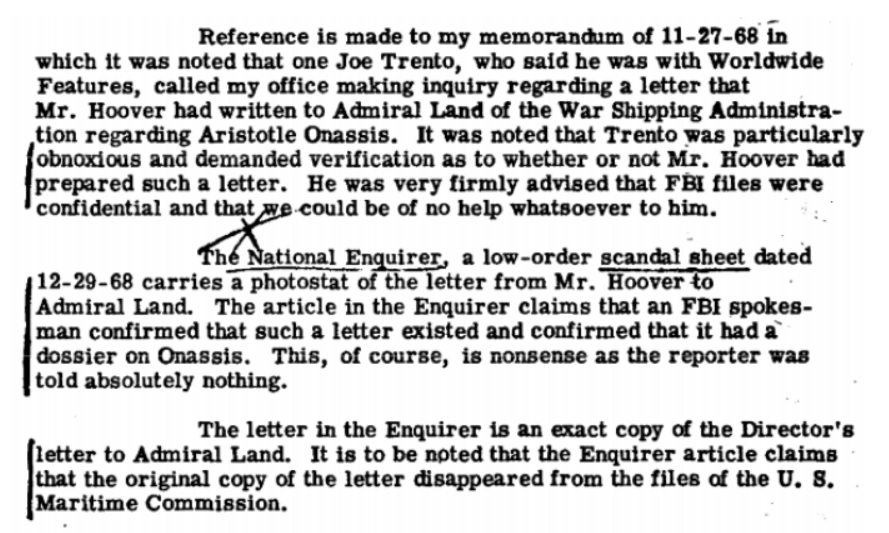 To its credit, the Enquirer correctly describes the information in the letter as having been provided by an informant and not Hoover’s personal judgment. The appears to match the FBI’s characterization of it, with the article’s description of the discussions with both the Maritime Commission and the FBI being at odds with the FBI’s written record from before the article’s publication. Though the Bureau doesn’t seem to have positively identified Trento as playing a role in the Enquirer’s article, the timing is highly suggestive and the Enquirer appears not to have independently reached out to either the Bureau or the Maritime Commission. Under the circumstances, the Bureau’s assumption of Trento’s role seems reasonable. 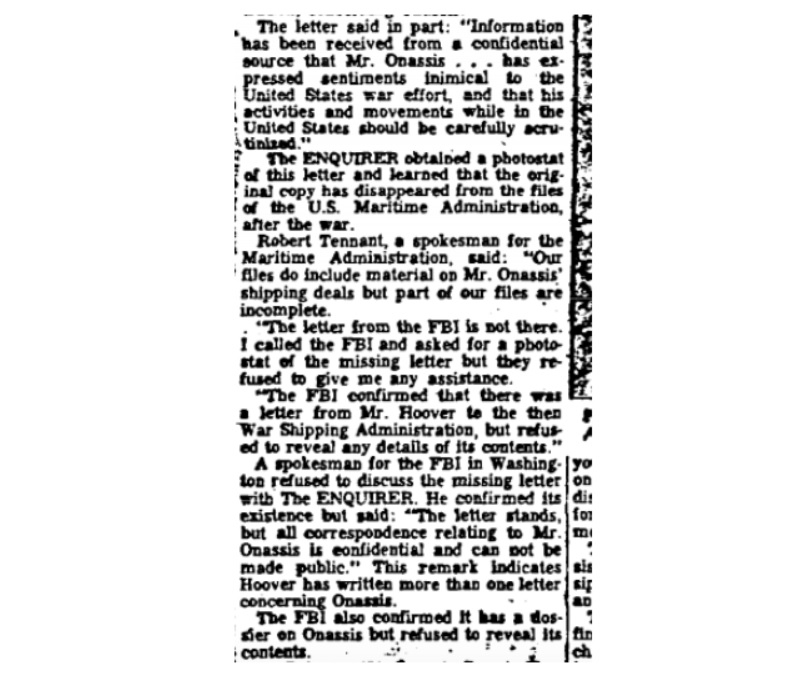 The FBI appears to have recommended no action be taken on the matter beyond recording the matter in the Bureau’s files. Both memos were stamped “Crime Research” and included in the file on Aristotle Onassis.

Attempts to reach Mr. Trento for comment by email prior to publication were unsuccessful, as the email address located no longer seems to be functional. You can read the relevant section of the FBI file below, along with a copy of the letter and the article from the National Enquirer: