In the white heat of the Red Scare, journalists were often at the center of the unceasing national probe over patriotism. Over 700 pages of files on Edward R. Murrow, released via FOIA by Shawn Musgrave, detail the FBI’s intricate special inquiry into the legendary American newsman.

In 1961, the FBI conducted a special inquiry into Murrow at the White House’s request in order to vet him for Director of the United States Information Agency (USIA). The records begin with the accusation that Murrow’s name appeared on a mailing list for the National Committee to Defeat the Mundt Bill, a proposed piece of anti-Communist lobbying.

Edward Murrow was outspoken in his telecasts against the witch hunt tactics conducted by the House Un-American Activities Committee (HUAC), in particular the techniques of Senator Joseph McCarthy. He verbally combated the Senator on his “See It Now” program, prompting national criticism of McCarthy’s hostile and manipulative investigation techniques. 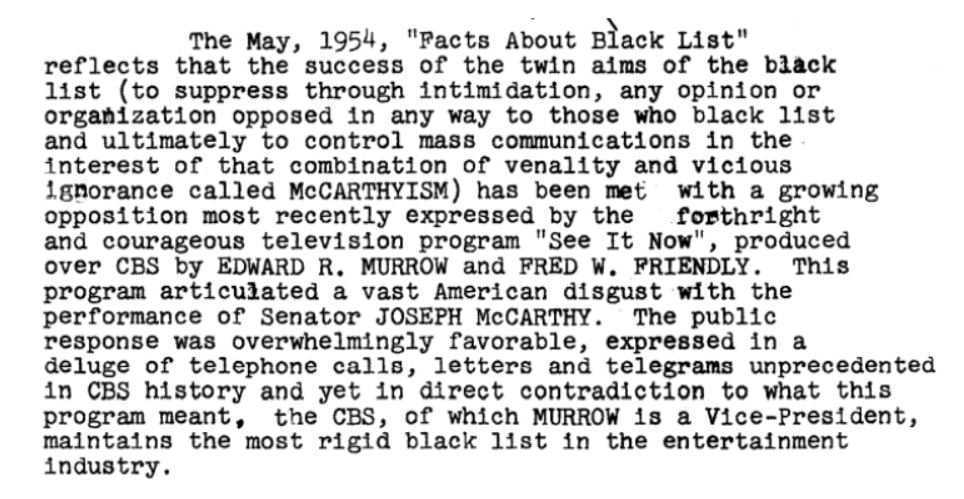 In a file describing the friction between the two figures, a document states McCarthy, “described Mr. Murrow as a member of the extreme left wing, bleeding-heart element of radio and television.” Mr. Murrow countered with “if the Senator means I am somewhat to the left of his position and of Louis XIV, he is correct”. HUAC and associated super conservatives continually alleged that Murrow’s “leftist” reporting slanted news in order to carry out a hidden Communist agenda.

During his clash with McCarthy, one of the Senator’s aides announced to a camera crew in Washington that they had evidence Murrow was “on a Soviet payroll in 1934.” In a page entitled “Russia’s Halted Project,” information on Murrow’s involvement in the formation of an international school in Moscow is outlined.

Following Hitler’s rise to power in Europe, Murrow’s colleague Laurence Duggan and public intellectuals such as John Dewey and Robert M. Hutchins, served on the council of The Institute for International Education (IIE). In 1935, Murrow served on the Advisory Council for the IIE, which proposed an international school in Moscow. The Moscow University summer school was intended to foster a cosmopolitan intellectual community, dealing “primarily with the exchange of students and professors between this and foreign countries”.

When McCarthy cited evidence of Murrow’s direct involvement with Communist groups and activities, he was directly referencing the summer school for children meant to foster globalized thinking. While the Communist group was involved in order to facilitate housing and supplies, there was no reference to their involvement in curriculum. The school was, “abruptly and without satisfactory explanation, canceled” by the Russian authorities with no continual effort to revive the project.

“’Some of the persons on that list are now dead’, Mr. Murrow said, ‘but presumably not yet immune from the Senator’s attentions. It was and is a rather distinguished list and I plead neither ignorance nor youth as the reason for my name being on it’.”

The Bureau kept tabs on “acquaintances” of Murrow’s, including Duggan who they cite as an unconfirmed friend of Soviet spy Alger Hiss. The FBI’s collection of character references regarding Murrow are expansive, and their testimonies fascinating. The fanatical fear of Communism clearly cuts the line between civil admiration and seething abhorrence for Murrow.

There area vast number interviewed whom which had no personal ties to Murrow. The individuals who give account to Murrow’s character are diverse, ranging from oil tycoon Frank O. Prior, who claimed the broadcaster was instrument of anti-American business, to a columnist for the New York Daily Mirror who, “was under the impression” that Murrow had played a partial role in his colleague Don Hollenbeck’s suicide, citing “[he] had been driven to his death by the “Red pack” and that Murrow had dictated that his programs “follow the line of slanted news”.

As a public figure and broadcast journalist for CBS he was of course subject to public criticism - including a trove of absurd accusation in which the FBI collected with all seriousness. Consider this dubious account presented by Francis J. McNamara, Director of Research, House Committee on Un-American Activities …

A sizable percentage of the documents outline accusations of Murrow’s alleged Communist ties. While he was an outspoken critic of Communism, Murrow was a champion for civil liberties and engagement, and therefore under suspicion. Even his membership to charitable organization such as the Committee for the Care of Wartime Children (CWC) was called into question. In one file, the Chairman of the Committee for the CWC Eleanor S. Gimbel, is cited in a The New York Telegram article as a “supporter of many Communist-front organizations.” A testimony from Former and current members of the Communist Party (CP), relayed that she was a friend and possible member of the CFP in attempts to rope in Murrow.

Murrow’s involvement in the National Council of the Arts, Sciences and Professions is also accused of being a, “Communist front”. Several accounts attempt to indicate Murrow as Communist prop, leveled up by such leftist publications as the The Daily Worker – an East Coast Communist Paper that both criticized and complimented Murrow throughout his career.

The FBI also kept records of Murrow’s movements, noting the countries and dates of his travels. In order to renew his passport and travel to European countries for research, Murrow was required to turn in a “non-communist affidavit” to the State Department that swore off any membership to the Communist Party. Despite his cooperation, the bureau still maintained an inconclusive stance on his alleged Communist leanings …

While J. Edgar Hoover was somewhat critical of McCarthy’s unchecked HUAC investigations, Murrow was without doubt on his Commie radar. The obsessive collection of negative, wildly libelous news articles that accuse Murrow of bias and Marxist reporting consume a large portion of his file. Murrow and Hoover even had a brief correspondence, in which Murrow extends an invitation for Hoover to join him and his wife at a USIA film and television production. Hoover “politely” declined.

Behind the array of accusations throughout the 700 pages of material, concrete evidence is never provided. Rather, suspicions are backed by the opinions of those who saw anyone critical of American policies as enemies of the state. Those who feared the Iron Curtain saw journalists and activists like Murrow as an, “ultraliberal who exaggerated the faults in United States society” rather than a rational man who questioned the status quo. But it wasn’t enough, and ultimately, the Bureau was never able to sufficiently bury Murrow as a Communist sympathizer.

Download the entire 91 megabyte file on the request page.