Michael Manley, who served as Prime Minister of Jamaica for a total of 11 years, is considered by nearly half of Jamaicans as the best Prime Minister the country ever had. 68% say that he should considered a national hero. However, in 1980, when he was engaged in a tough re-election battle, the Central Intelligence Agency (CIA) had a much more negative view of Manley, fearing he would resort to illegal means to stay in power.

The election, which saw Manley, who called himself a democratic socialist and established strong diplomatic ties between Jamaica and Cuba, face off against the center-right Jamaican Labour Party’s Edward Seaga, was watched closely by the Agency. In a number of classified reports, CIA officers worried that he had shifted to the left and expressed a belief that he might try to maintain power unconstitutionally. These concerns were ultimately not borne out, but the Agency’s prediction that Manley would lose power to Seaga, the candidate it favored, proved to be correct.

In a memo written on April 2nd, 1980, titled “Prospects for Jamaica,” the CIA considered the idea that Manley might try to stick to power unconstitutionally. The officers writing the report emphasized that a recent bailout deal with the IMF, that had reduced economic growth, had weakened the Prime Minister’s popularity and strengthened the opposition. Despite fears about the influence of “radicals” around Manley, the agency believed that his embrace of his party’s left did help his political chances.

The document went on to doubt Manley’s commitment to democracy and worried that he was more devoted to socialism than electoral methods.

The memo also revealed a belief that the Cuban and Soviet governments were clandestinely supporting Manley’s government.

Despite these concerns, the CIA remained confident that the Jamaican Labour Party had the upper hand politically, while worrying that violence could prevent a democratic political transition.

As the election drew closer, the CIA grew less concerned about Manley potentially remaining in power illegally and more concerned with the possibility that he might win the election. On October 3rd, a secret document titled “Jamaica: Election Outlook” claimed that Manley’s campaign was more effective than the agency had thought it would be. 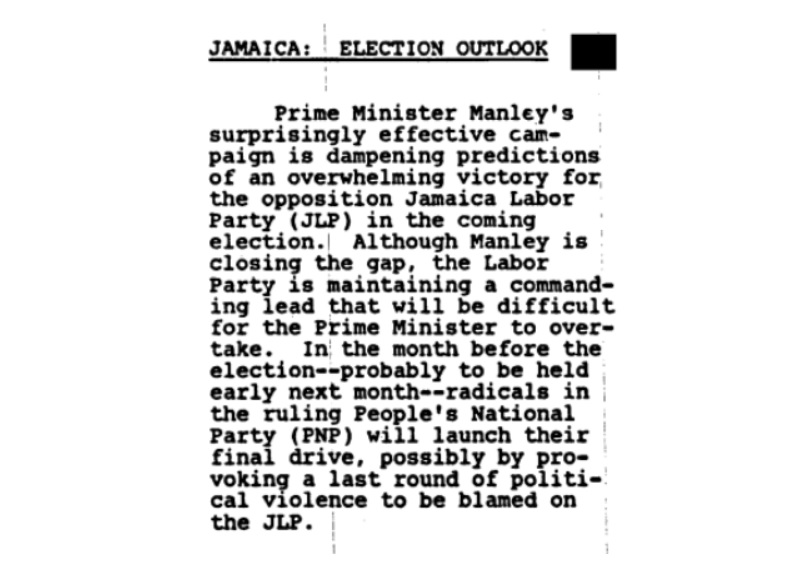 The 1980 election would prove to be the bloodiest in Jamaican history, with much of the violence being perpetrated by gangs associated with Edward Seaga’s Labor Party. Despite concerns about Manley’s campaigning, the Agency ultimately ended up predicting a large JLP majority that was very close to the win that the party actually achieved.

The JLP won 51 of the 60 seats in Jamaica’s House of Representatives, a 42 seat majority.

After the election, the CIA did not believe that Seaga’s large margin of victory meant that he was politically secure. In a memo titled “Jamaica: Need for Assistance,” the agency expressed its view that Seaga’s popularity would not last because he was dealing with the same economic circumstances that had doomed Manley.

The heavily redacted document does not urge any specific actions, but it presents the risk of another Manley government continuing warm relations with Cuba.

It is still unclear how much the CIA actually intervened against Manley, though the allegation has persisted for years and been supported by a number of different former CIA officers. Though Manley lost the 1980 election, he went on to govern for three years after beating Seaga in 1989.

Read the “Prospects for Jamaica” memo embedded below: