To mark the 49th anniversary this week of the founding of the American Indian Movement (AIM), we’re taking a look at the FBI file of John Trudell, esteemed Santee Dakota poet, writer, speaker, and musician who was a key member of AIM, rising to the rank of National Chairman by the mid seventies. 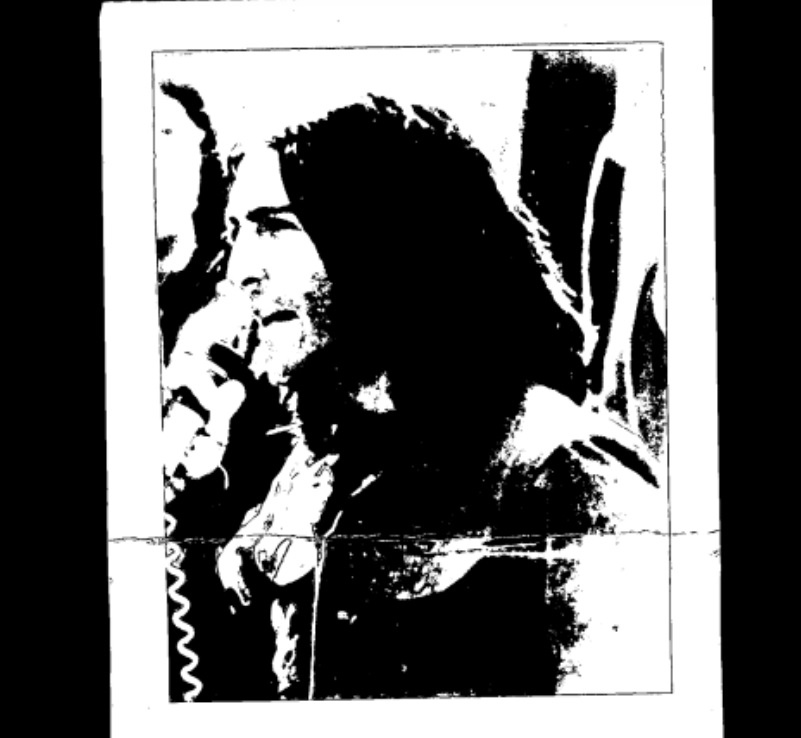 To the Bureau, Trudell was a renowned “agitator,” but within his community he was a motivator who inspired Indigenous peoples across the nation to strive for a better life.

Trudell first came to the attention of the FBI in 1969 when he and other AIM members occupied Alcatraz Island in an attempt to form an Indigenous colony. Over the course of the next decade, the Bureau built up a 138 page case file, utilizing open source intelligence from newspapers and a number of confidential sources. 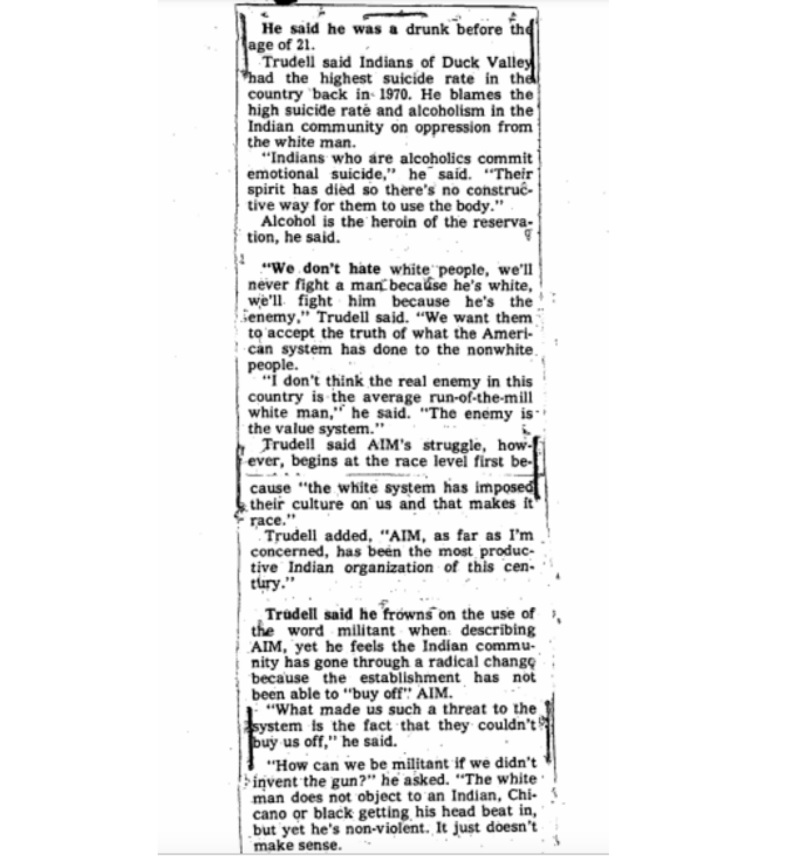 In September 1972, Trudell and other AIM leadership and membership occupied the Bureau of Indian Affairs headquarters in Washington, DC. The year after, in February 1973, Trudell would go with hundreds of other AIM members to Wounded Knee, South Dakota on the Pine Ridge Reservation, the site of the massacre of 300 Sioux, including women and children, by US cavalry in 1890. The massacre effectively ended the last chapter of the Indian Wars. 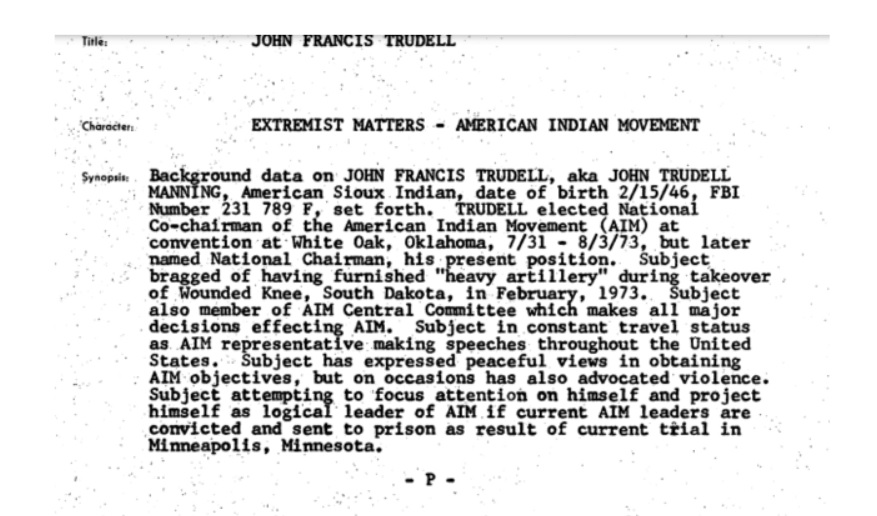 While there, he participated in an armed occupation in protest against the treaties broken by the US government and against the Pine Ridge Tribal Chairman Richard Wilson and his Guardians of the Oglala Nation (GOONs), a brutal security force on the Reservation. After the occupation ended in May 1973, Trudell returned to a transient way of life, joining a protest in New Mexico for better conditions in mines for Navajo workers.

In 1975, Trudell held up the Duck Valley Trading Post with a pistol, demanding food for starving elders on the Reservation and a drop in prices. In the process, Trudell fired a single round into the wall behind the clerk, who was not injured. The FBI believed the incident was staged in order to get publicity for the brutal living conditions at Duck Valley, and they devoted a considerable amount of time trying to bring him up on an assault with a deadly weapon charge. The Bureau took control of the investigation and even went so far as to forensically examine the can of Hawaiian Punch that the bullet had passed through. 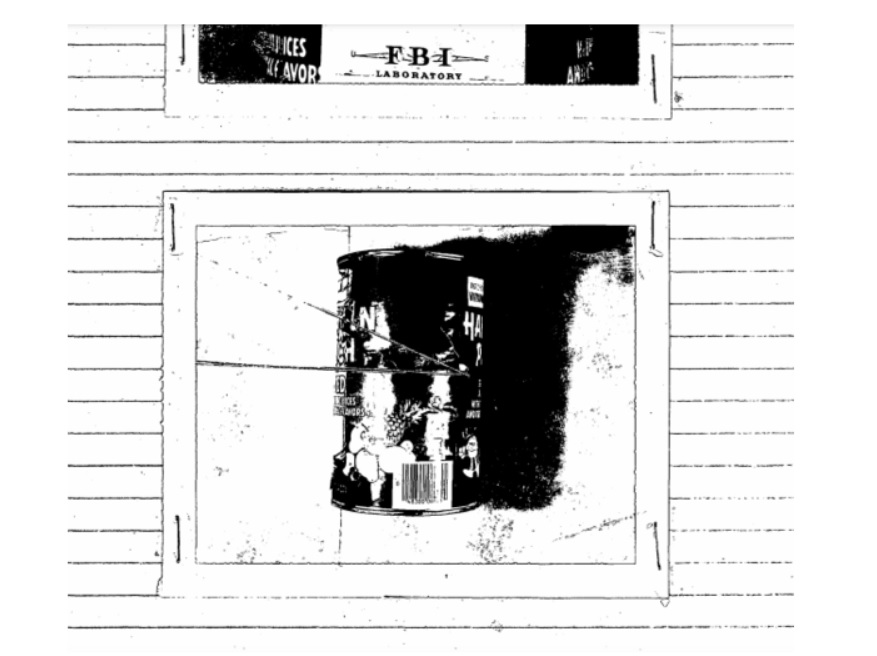 The file also includes an investigation into the alleged 1979 arson of Trudell’s home on the Duck Valley Reservation. His wife and children all perished in the fire, which began on the roof - an extremely unlikely and suspicious place for a fire to begin, especially when one takes into account that less than 24 hours prior Trudell had burned an American flag in front of the FBI’s DC headquarters as an act of protest. Congressman Ronald Dellums from California wrote to the then-Director of the FBI William Webster, imploring him to investigate “the suspicious circumstances,” and saying “I strongly feel that the Nevada fire deserves your immediate and thorough investigation.” The Bureau begged to differ, instead sticking with the party line that the BIA had conducted their investigation and it resulted in an “accidental” finding, thus the investigation would be not be pursued further. 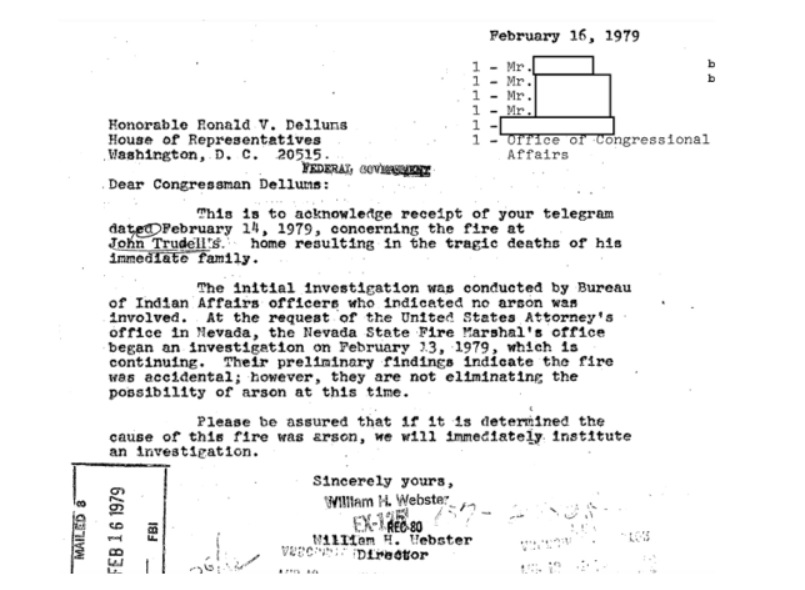 To this day, the case has never been fully investigated, and likely will never be.

Other highlights from his file include the charges that the FBI considered bringing Trudell up on, including the exceptionally rare “Insurrection or Rebellion” Title 18 United States Code, Section 2383. They also batted around Section 2384, “Seditious Conspiracy.” If anything is to be taken away from that, it is how fearful the FBI was of his efforts to organize and motivate the Indigenous nations to strive for something greater than reservation status. This makes sense especially when considering what sources said about him, and how long the Bureau had special agents out investigating him and trying to apprehend him. 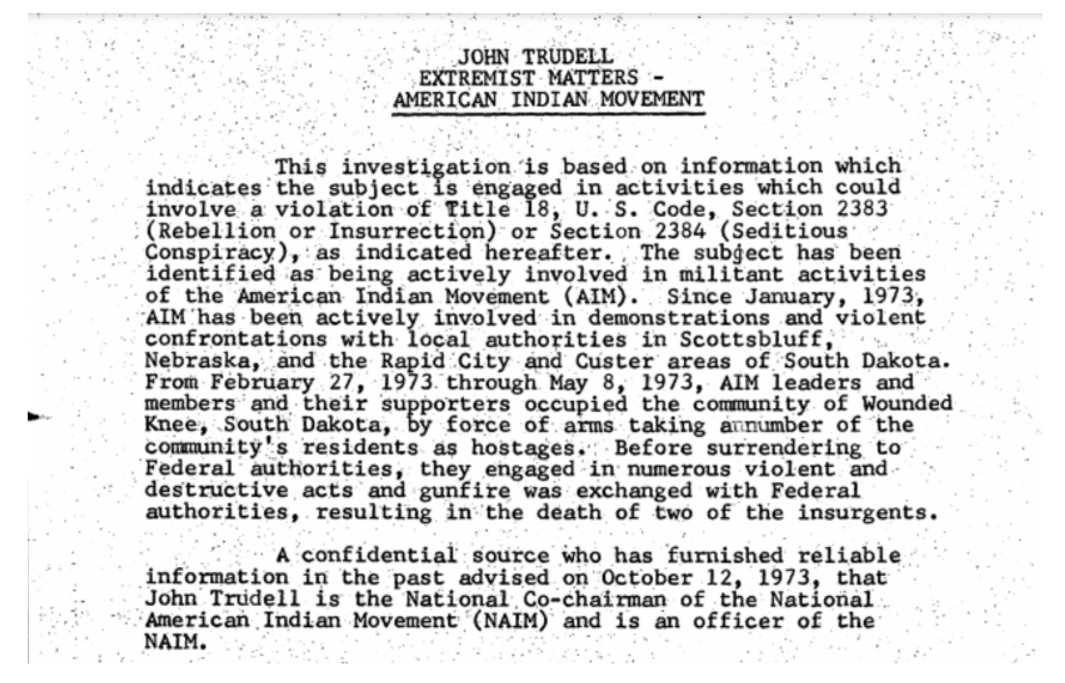 An article the FBI had used as part of the investigation, which appeared around the time that the leaders of AIM were arrested for their role in the occupation of Wounded Knee, quoted Trudell speaking about the US government. “The government is dragging us through the court system so that American consciousness can pretend at humanity. Americans should begin to think about their government, as it is the one instrument that can bring people together or keep them at odds.” 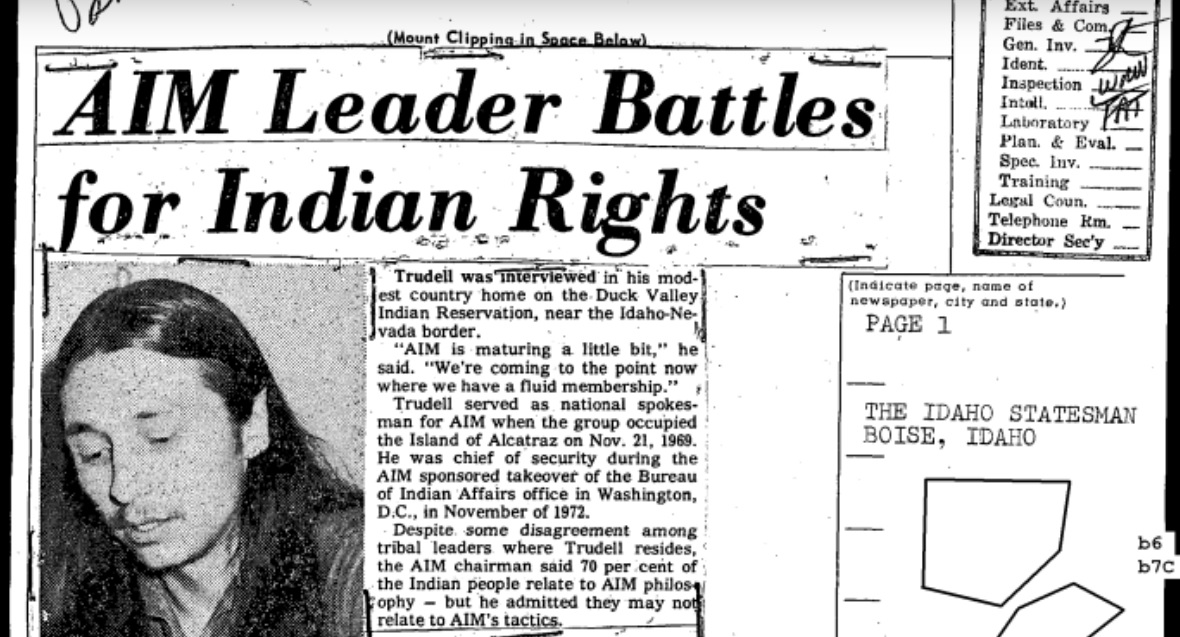 After presenting the remarks without comment, the brief simply skips to Trudell acting as an organizer and spokesman for the Iroquois armed takeover at Eagle Bay, New York, in 1974. The occupation of the Ganienkeh Territory, as it is called by the Mohawk Iroquois, was another episode of Indigenous people struggling to take back land ruthlessly stolen from them. The briefs are full of accounts featuring Trudell traveling across the country organizing Indigenous people, and telling them to not be afraid to challenge their meager status quo, and to if necessary fight for their right to sovereignty. 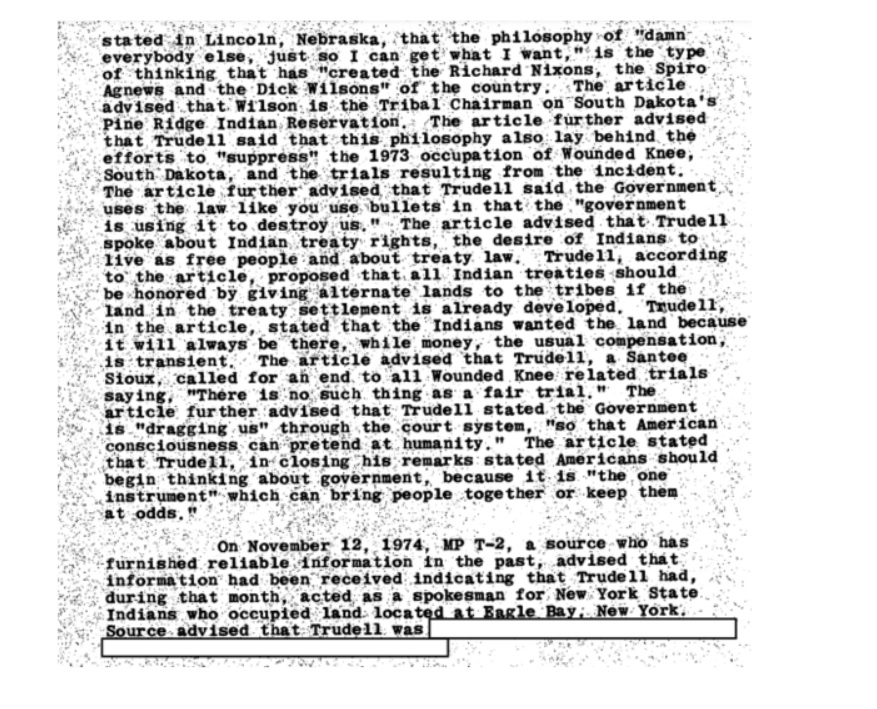 One source had a particularly glowing assessment of Trudell, culminating with the fitting line, “Trudell has the ability to meet with a group of ‘pacifists’ and in a short time have them yelling and screaming ‘right on!’”

Whatever you think of his politics, Trudell was a man singularly devoted to improving the lives of his people. And for his efforts, he received this extensive FBI file, his family most likely murdered, and federal agents haranguing him for years on end. His speeches survive on YouTube and elsewhere on the internet, and it is highly recommended that you check them out, along with the rest of his file below.