Since before even taking office, President Donald J. Trump has been the center of intense impeachment gossip and speculation. It’s garnered such significant interest that even unrelated searches can yield bizarre theories on how it works.

Fortunately, one of Richard Nixon’s many gifts to the transparency and accountability community is a Department of Justice memo from the ’70s entitled Legal Aspects of Impeachment: A Memo.

Dated February 1974 - the month the impeachment process against Nixon formally began - the 278-page document (including various appendices) lays out the process, precedent, and legal considerations for impeaching a sitting president.

At the time, the DOJ didn’t have a lot to work with. Andrew Johnson was the only president impeached at the time, in 1868. (Bill Clinton would later be impeached in 1998, with neither being convicted.)

Can the impeachment process begin outside of Congress?

No. I’ve seen a lot of creative ideas floating around about secret courts, state Attorneys General, and other mechanism for launching an impeachment, but the DOJ concluded that the impeachment process is solely the domain of Congress.

It has been tried though, including in the case of Johnson: 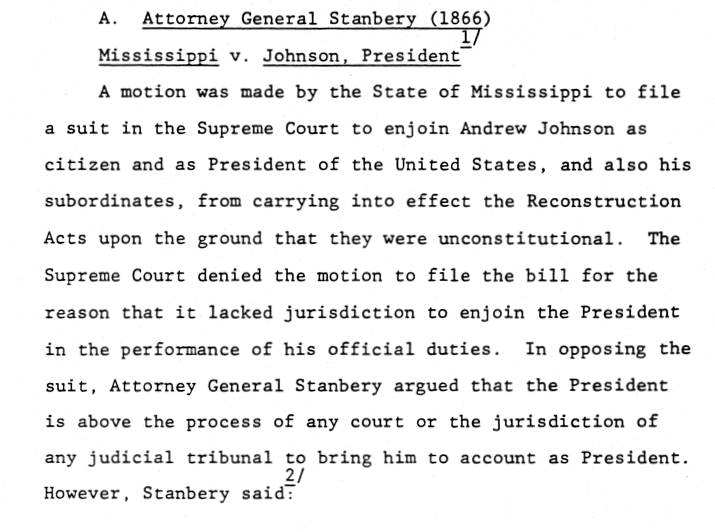 Can a president appeal an impeachment?

Long story short, probably not, and largely for the same reasons as above, the DOJ found. While acknowledging that there was some debate here, the report concludes that most legal scholars agree that a Senate conviction is final and un-reviewable.

What impeachment precedent is there?

Since this document was created, we now have some more precedent in the cases of Nixon and Clinton, but at the time the Department of Justice also analyzed 11 other non-presidential impeachments, ranging from an attempted impeachment of Senator William Blount (which the Senate found was outside of its jurisdiction) and a number of judges.

Convictions were rare, usually ending with either the subject of the impeachment proceedings either being acquitted or resigning.

The first conviction, of Judge John Pickering, was particularly controversial. Prompted by President Thomas Jefferson, the investigation found that he was of bad “moral character” - but it was less clear if he had actually committed a high crimes or misdemeanor, as spelled out in the Constitution’s provisions for impeachment.

Instead, he was impeached over the handling of a property dispute for a ship and getting drunk and profane while working: 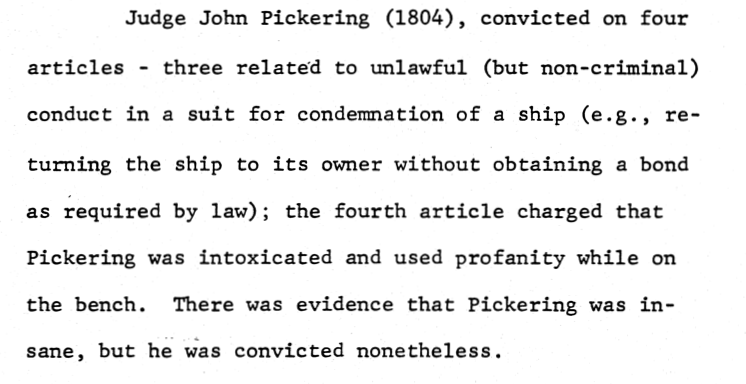 Have more questions about how presidential impeachment works? Get answers straight from the source on the request page with the full impeachment FOIA request or the documents embedded below:

Image by Theodore R. Davis and originally published by Harper’s Weekly, now in the public domain via Wikimedia Commons

Michael Morisy sent this request to the Department of Justice, Office of Legal Counsel of the United States of America