For over two years, dozens of articles, and thousands of public records requests, Beryl Lipton’s Private Prison Project has given much needed scrutiny to the incarceration industry. In anticipation of a talk Beryl will be giving on Friday, we interviewed her regarding her motivation for starting the project, her methodology for getting records released, and what she’s learned along the way.

What got you interested in the topic in first place?

After widespread increased access to information, the first topic I wanted to tackle was prisons. The system in America is so bloated, but it’s also a really contained, specific ecosystem - it seemed to me absurd that even basic recordkeeping could be improperly managed. I’d known of one instance in which a person had been taken into custody, and yet each authority that should have known just where this person was being held didn’t know the answer. Basic stuff.

I’d also learned of the greatly-reduced recidivism rates associated with education, and in a simmering idealistic fury, I couldn’t get how we could have ways of improving people but not use them, all the while insisting that a mass surveillance state is appropriate, even though actually detained people were being lost.

JPat mentioned he’d heard that private prisons weren’t subject to FOIA. That’s really something. It’s stunning that the government, working on our behalf, would sign away the carceral corporeal responsibilities over its people to a corporation and then tie its own hands behind its back. These private prisons were in such a variety of areas, they’d offer a way to explore records and corporate relations in many states and jurisdictions, which was appealing. And it seemed important, idealistically, to contend with the overwhelming relationship between private and public interests and the possibility that policies could and should be reexamined. For all the Wall Street/Main Street rhetoric of Occupy, here the two were handcuffed and allowed to carry on.

Of course, there have been plenty of great people working on this issue nationally, but resources and a venue can be hard to come by.

How did you start filing? What were you hoping to get?

I began by adding to MuckRock’s database all of the agencies I would need. Initially this meant the town clerk, the county clerk, and the state DOC associated with each CCA and GEO Group facility. And this was very time consuming and very helpful. MuckRock’s multi-request feature lets you submit the same request to many agencies at once, so I asked for the contracts. Even this, though, turned out to be wrong. I was still a rookie requester, so I didn’t include the rash of other sort of agreements you might have - an IGSA or a MOU. From there it’s been scattershot.

I had no specific hopes. The contracts seemed obvious gimmies, but I was totally open to finding that private prisons were forthcoming and clean in their operations, that states had diligent accountability mechanisms in place. But, as is the nature of corporations and public records, things have been slow and difficult.

What were the most surprising responses you received?

Well, some surprises are of the recordkeeping variety and some were in the actual responses.

For example, one of the earliest questions we were interested in answering - which we still haven’t quite answered - had to do with the number deaths in custody that happen at private facilities. The Bureau of Justice Statistics runs a census - but when I asked the state departments for their forms, many of them didn’t keep copies for themselves or claimed that the prisons in question were not subject to the reporting.

Other times, there were responses that seemed out of line with the question I was asking. In Louisiana, I sent my standard request to the local clerk, but I missed one of his misdirected responses, and our auto follow-up went out. He responded very grumpily. 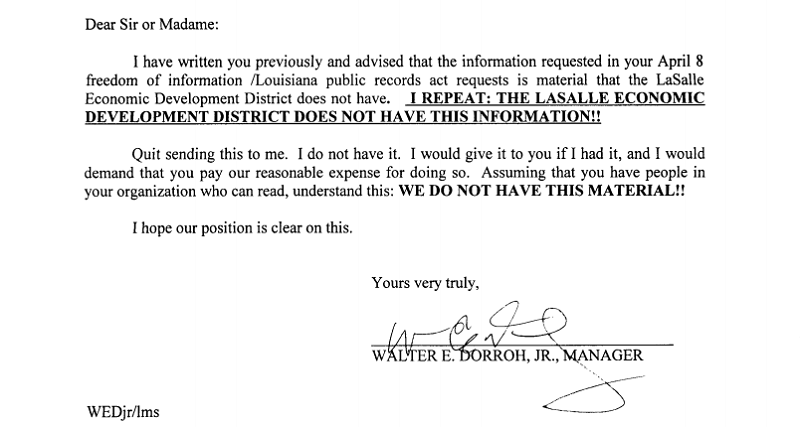 And in New Mexico, when Isubmitted payment to CCA for their grievances, they sent me $70 worth of redacted materials. It’s one thing when the government redacts whole bunches (the BOP has done it before for sure), but to send a check to a private corporation and get back black boxes - that seems like a real slap in the face. I’m still waiting to find out how to properly appeal that.

What surprised you the most about the project?

I try to hold onto my wonder and idealism; it helps look at how things are and consider how they could be, warding off the slumps. But I think that means I’m consistently surprised at how slow and boring and unnecessary so many of the ills that plague our country seem. So each time I look at something like the BOP’s continued processing of its use of force reports, I throw my hands up and demand of the sky why they don’t just have one place where they access all of that information, this is the future, for crying out loud. Anyone dealing with records requests is familiar with this, but it’s astounding and it really should continue to be, in the most Kafkaesque way, until we finally have a system we can work with.

What are you hoping to do next? How does the DOJ decision affect your work (or not)?

The next step is to really get organized and present the requests in a way that makes it easier to donate directly to particular ones. The hardest thing is really to prioritize the requests in a way that can facilitate participation. Though our initial crowdfund was very successful, you look at GEO, CCA, and the others, and they have resources, of course, and then you look at somewhere like Mother Jones, which caused the biggest boom in the conversation this year at the cost of $350,000, and you see how hard it is to do battle with these sorts of things, even when the questions seem basic. With something like private prisons, I think a lot of people respond to it as a matter of concern, because it really strikes a nerve at that intersection of democracy and capitalism.

If, in broad strokes, the people of the democracy are the consumer, are the demand for this element of the capitalist system, then why aren’t they able to question it, examine it in a way that can then aid the project of reconstructing the mass incarceration machine?

I was recently speaking with someone who’d received a firearms catalog in the mail, and right on the catalog, it stated that purchasing firearms in this way in her state was illegal. So she called the state Attorney General to ask why they should be allowed to market there at all. The AG said that it is essentially on the consumer to avoid the purchase, not on the seller to avoid solicitation. Maybe this sort of twisted legal responsibility is just what we get with our individual freedoms. But I think it speaks to the DOJ decision. Simply because they said it would get done, doesn’t mean it’s now done, right? The BOP has said, here is an option, but we shouldn’t take it. But the option remains, and little has been said why it shouldn’t be taken - others have pointed out that, for better or worse, the way the BOP relied on the data of its IG report was not on a totally solid data-drive logic foundation. Already, the BOP has extended or renewed contracts. There is talk on the state level of reconsidering private prison contracts, but there’s no guarantee, and even so, that discounts what still stands to be learned from their operations and our government’s relationship to them.

But the DOJ decision does throw a spotlight on the issue. It very publicly announces, “We had a policy, and maybe it wasn’t great. We’re going to stop.” So that, of course, is very hopeful, as long as we’re cognizant of its limitations. Fortunately, one of the limits that the DOJ decision I think helps to scale is the discussion of whether or not private prison matters are an issue of “public concern” or are “in the public interest,” and from a FOI perspective, this should help a lot with issues of fee category and fee waivers across the board.

What’s the biggest misconception you feel people have about the Private Prison industry?

I think the biggest misconception is that they’re either a worthy scapegoat or totally blameless for the bureaucracy - our United States of America government - that allows them to exist.

Initially, we got a bit of pushback from people scoffing at the thought we would dedicate time to this, which “isn’t the cause of mass incarceration” and isn’t somehow the “real” issue, because I think that’s how the discussion around them had been framed. But from where we are, these sort of private-public relationships, this sort of bristling at the mere asking of questions, this element of black hole-like custody of individuals- these issues are rampant throughout our government, but perhaps aren’t so blatant as they are in the context of prison privatization.

But we don’t have to live in a world anymore where the discussion has to be dictated by government reports or press releases. We can ask to check its work.

Interested in learning more? This Friday at 6pm EST, join Beryl for a talk followed by a Q+A regarding the Private Prison Project at the MuckRock offices in the Old Cambridge Baptist Church near Harvard Square. If you can’t make it in person, we’ll also be broadcasting the event via Facebook Live.

Release Notes: Join us for Demo Night in Boston next Tuesday!