In 1981, Walt Disney World was getting ready to unveil a new gem in its crown of amusement parks, the Experimental Prototype Community of Tomorrow, or EPCOT. Revolving around a massive sphere called “Spaceship Earth” and a lagoon that initially called for cultural installations from nine countries, EPCOT was intended to be the ultimate harmonious international village, a shining example of global unity. Naturally the FBI had a problem with it.

Documents released last month to Jason Smathers indicate that as early as December 1979, almost three full years before the October 1, 1982 opening of EPCOT, the bureau was concerned with possible Soviet involvement in the endeavor.

When the Soviet Union were “lukewarm” about the offer because the country would be unable to use their instillation to discuss politics, the FBI’s biggest concern became international terrorism and the involvement of the People’s Republic of China.

In a clear demonstration of the capabilities of FBI field offices and their relationship to FBIHQ, the file is filled with the Tampa office voicing anxiety by requesting additional training, asking for procedural assistance, and wishing HQ would respond faster to their requests.

The Tampa field office seemed concerned that any terrorist organizations operating within or around the participating nations, “Canada, France, China, Italy, Japan, UK, West Germany, Africa, and Mexico,” would converge on EPCOT. But, by far the biggest concern of the Tampa branch would be the 6 foreign nationals per country that would be staffing the national pavilions.

By 1981, the FBI was already anticipating where these Chinese nationals living in the United States would be housing, namely in Snow White Village on Seven Dwarfs Lane. What the Bureau planned to do with this information, in terms of possible procedures for surveillance has been redacted or was made moot by the fact that the delegates ended up taking housing in Orlando.

The Tampa office felt so inadequate to handle the new residents, not to mention the millions of international tourists, that they sought help from the Knoxville office who were in the midst of handling similar problems with the Chinese delegate to the 1982 World’s Fair in Tennessee. 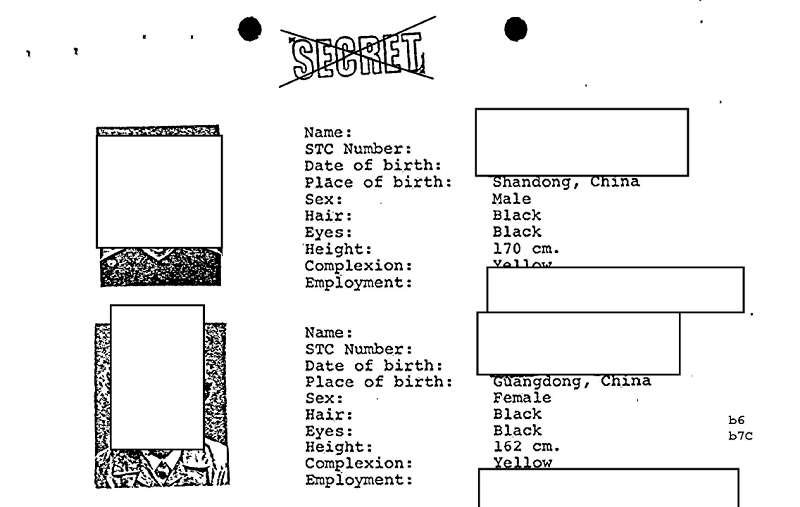 Ultimately, the Chinese delegation appears to have been chosen from Chinese nationals living as resident aliens and attending universities inside the United States. By the time the delegates got down to Florida, the FBI already knew an astounding amount about them, including the fact that one young woman was, “a ‘loner’ who refused to mix socially with other students.”

The one named delegate is K.W. Poon, a New York restaurateur who previously ran the Chinese pavilion during the 1982 World’s Fair. The file is critical of Poon, who is described as an apolitical opportunist who was only interested in making money …

And even worse, his food wasn’t very good.

The Bureau’s criticism of Poon rings a bit hypocritical - since its creation, the FBI has been the professional cynics of American society, tasked to find the danger and threat in anything. Even EPCOT, a symbol of international unity and childhood wonder, is no exception to the FBI’s pessimism.

Read the full EPCOT file embedded below, or on the request page.

Image by chensiyuan via Wikimedia Commons and is licensed under GFDL