Following a request from MuckRock’s Inkoo Kang for files on the “Master of Suspense” Alfred Hitchcock, the FBI released 18 pages of responsive documents, the vast majority of which concerned their portrayal in his eponymous show, rather than Hitchcock directly:

Shortly thereafter, Kang followed up with similar request to National Archives - and received the same 18 pages (plus a bonus cover page), but with much cleaner copy, and most importantly, without redactions. Allowing us to compare this … 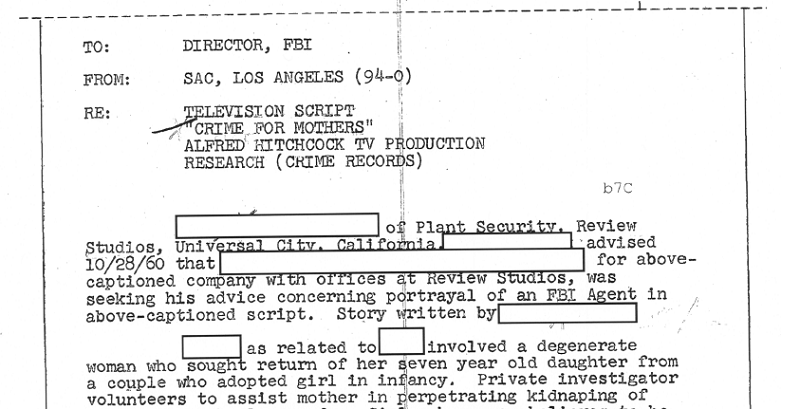 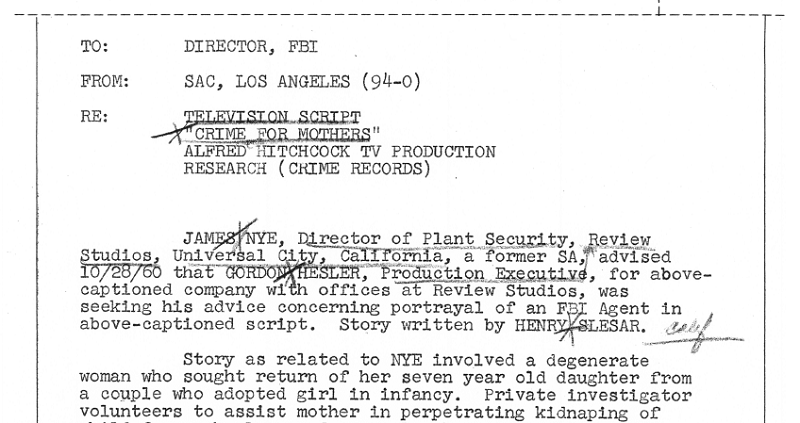 As for why the FBI felt that redacting the word “story” was a justified use of the b7(c) exemption, well, that’s a mystery beyond the likes of us here at MuckRock.

Perhaps sensing that the FBI playing a pivotal role in a double-cross would not go over well in Washington, Nye contacted the Los Angeles field office, who then contacted the Director. The response was pretty clear - the part must be cut.

At Nye’s suggestion, the writer of the episode, George Hesler, contacted the FBI’s field office to discuss their objections. After what must have been a very enlightening discussion of the Little Lindberg Law, Hesler agreed to eliminate all mention of the Bureau in rewrites.

Not the types to take Hesler at his word, however, the FBI - through Nye - continued to inquire about the exact nature of those rewrites.

Unfortunately, the Bureau’s plan to irritate Hesler into submission appears to have backfired, as a line clearly identifying the main character as a former FBI agent was inserted during filming …

and in what may be one of the pettiest plots of sabotage ever devised, Nye informed the Bureau that he is “endeavoring to discretely effect the elimination of this bit of dialogue.”

Whatever “discrete techniques” Nye employed weren’t terribly effective, as the line survived intact when the episode was aired, as noted by this charmingly indignant memo:

However, as that rather ominous last line indicated, Alfred Hitchcock Presents now found itself at the top of the FBI’s queue. The next time the show planned on featuring a special agent, the producers - very likely at Nye’s suggestion - checked in with local field office first.

The field office again suggested the part just be omitted entirely, but the studio - after what must have been a very enlightening discussion of FBI’s jurisdiction over crimes at sea - politely pushed back.

J Edgar Hoover himself signed off on the character, albeit with his characteristic paranoid panache … 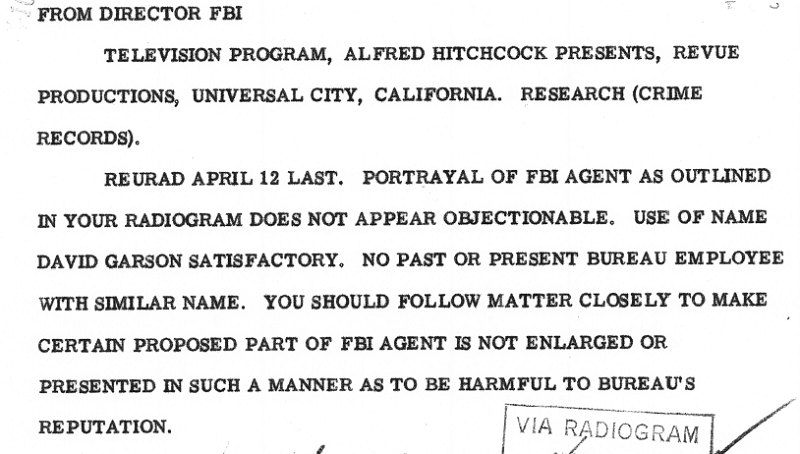 but not before running the most adorable background check of all time to see if they had ever employed somebody with the name “Garson.”

As for the maestro of the macabre himself, Hitchcock is only featured in his file directly twice - once in a newspaper clipping of rather dowdy Wall Street Journal article chastising his mentioning of the FBI in one of his closing monologues …

and finally in his background check for the 1965 presidential inauguration, which rather disappointingly, didn’t manage to find a single murder:

The cleaner Archives copy is embedded below, and can also be found on the request page.