The US Marshals Service is known to be one of the most avid users of StingRays, and documents confirm that the agency has spent more than $9 million on equipment and training since 2009.

While it appears the USMS is not under any nondisclosure agreement with the device manufacturer, the agency has withheld a wide range of basic information under an exemption meant to protect law enforcement techniques. However, much of the redacted data is already available online via a federal accounting website.

This same website indicates that the USMS signed a $12.7 million contract with the StingRay manufacturer in the final months of 2014.

As the enforcement arm of the federal judiciary, the US Marshals Service leads fugitive manhunts nationwide and abroad, including searches for federal suspects and violent fugitives wanted by state and local police. A USMS factsheet indicates that the agency arrests an average of 400 suspects daily.

The USMS and its numerous task forces have used cell site simulator technology extensively, but the agency has been less than eager to share details. A Wall Street Journal investigation published last November uncovered a program wherein USMS airplanes outfitted with cell site simulators fly across the country in search of fugitives. The Justice Department refused to confirm or deny the program’s existence.

And last summer, the US Marshals physically removed documents regarding StingRays used by task force deputies in Sarasota, Florida days before they were to be unsealed and disclosed to the ACLU.

Crucially, in the agency’s response letter dated February 25, the USMS Office of General Counsel replied that it had not found any nondisclosure agreements signed with the Harris Corporation or any other manufacturer. The FBI and Harris sign NDAs with both state and local law enforcement agencies that use the technology.

A US Marshals spokesperson declined to confirm whether the agency had entered into any NDA regarding cell site simulators. Instead, the official answered, “Your question will need to be submitted as a FOIA request.”

The 187 pages of invoices, contracts and other acquisition documents released by the US Marshals range from a September 2009 invoice to the Harris Corporation for $1 million to an April 2014 agreement to exchange outdated equipment worth $465,000 at no cost. 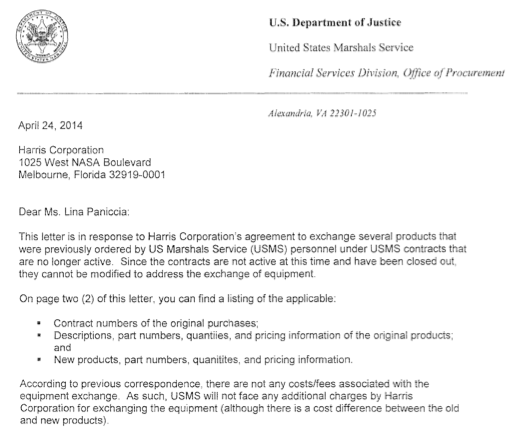 The documents confirm that the agency primarily uses StingRays “to aid in the apprehension of fugitives.”

Particular item names and descriptions are universally redacted throughout the documents. But released invoices and purchase orders indicate that USMS spending on cell site simulators and related services totaled nearly $10 million between September 2009 and April 2014.

An agreement attached to many of the invoices indicates that the agency and Harris Corporation agreed to blanket terms of purchase so as to “give the U.S. Marshals Service (USMS) a fast and effective way to purchase Harris’ [redacted] and [redacted] hardware and software, and related accessories.”

Extensive redactions throughout the document cache are made under a provision in the federal Freedom of Information Act — exemption (b)(7)(E), for the FOIA nerds — meant to protect law enforcement information.

Specifically, per the Justice Department’s own guidelines, this exemption covers information that “would disclose techniques and procedures for law enforcement investigations or prosecutions”, or that “would disclose guidelines for law enforcement investigations or prosecutions if such disclosure could reasonably be expected to risk circumvention of the law.”

The trouble is, much of the information blacked out by USMS FOIA officers is already available online to the general public, and hardly qualifies as law enforcement information as defined in this provision.

One printout from a federal spending database, for instance, details an April 2014 expenditure of $574,000. 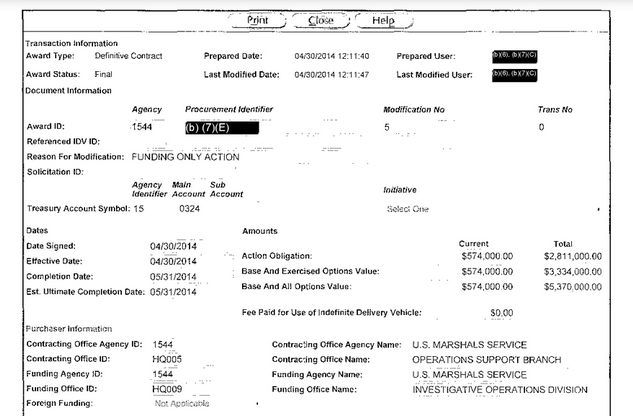 The released printout redacts the contract number under exemption (b)(7)(E). USMS FOIA officers also redacted the username of the federal official who entered the transaction into the federal database.

But navigate to the online Federal Procurement Data System yourself, and you’ll find completely unredacted records of all transactions between the US Marshals and Harris Corporation, including the contract number. 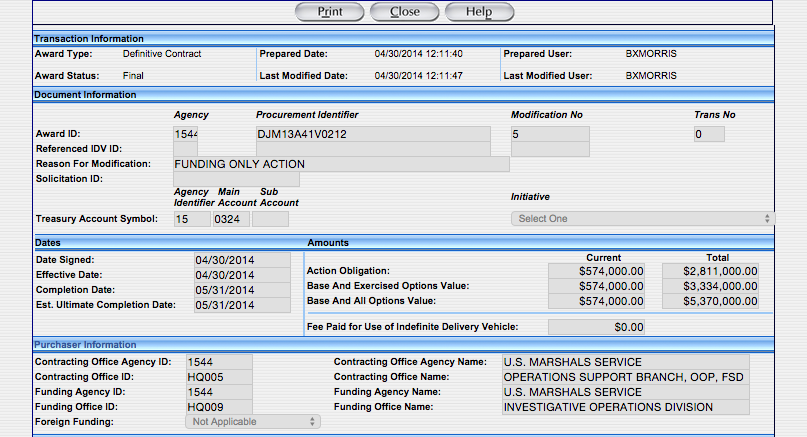 These transaction records do not come from any USMS intranet, again, but from a fully public website. Still, agency records staff deemed such particulars as the database URL to be exempt as “law enforcement information.”

The FPDS database also provides broad historical data for additional USMS expenditures to the Harris Corporation. These include purchases as far back as 1999, as well as a $12.7 million contract signed in September 2014, just two weeks after Mocek submitted his FOIA request. (The same expenditure information is also available on USASpending.gov.)

MuckRock will continue to pursue details of law enforcement purchase and deployment of cell site simulators nationwide, including these recent purchases of Harris Corporation equipment by the US Marshals.

You can read through the contract on the request page or embedded below, and compare to the unredacted version here.

Cell site simulator acquisition and use (US Marshals Service)

The General, the FBI, and the fascist plot to overthrow democracy (that nobody cared about)