This man is Paul Erdős.

A Hungarian born in the early 20th century, Paul (Pal) Erdős, mathematician, was well-known and well-liked, the sort of eccentric scientist from the Soviet sphere that made Feds’ ears perk up in mid-century America. His lifetime generated over 500 scholarly papers and a cult of collaborators. The Erdős number has become a mathy merit badge, and for those that don’t hold a coveted Erdős number of 1, there are resources to determine just how many degrees of celebrity separation exist between the man himself and other technical paper bylines.

But, try as they might, the Federal Bureau of Investigation was never able to find much motivation behind his movements and acquaintances beyond the math of it all.

His political criticisms applied equally to both sides of the Cold War crowd.

He was deemed to value openness for humanity’s sake over secrecy.

And, even after decades under the FBI’s watch, the general assessment by the Bureau was that Erdős (air-dish), at worst, was an inscrutable nerd - ”purely a mathematician with typical atmospheric mind as related to factual things … ”

His first run-in with authorities, in 1941, is remembered as an accident caused by curiously poking around a secret radio tower. “You see, I was thinking about mathematical theorems,” rather than the ‘No Trespassing’ sign, he explained later, after he and two others were arrested as suspected spies.

Correspondence with a professor of math from Communist China reignited interest in Erdős, who had spent the the intervening years taking teaching positions and lecturing opportunities around the country. The relationship turned up no nefarious foundations. He raised suspicions by refusing to take a loyalty oath and he was identified as one of very few non-diplomatic Hungarian nationals with a valid passport, but these were explained away by his academic philosophy and usefulness as an intellectual Hungarian trophy.

Still Erdős began experiencing difficulties getting his visa renewed, first in the fall of 1951, which he recounted in the Bulletin of Atomic Scientists. 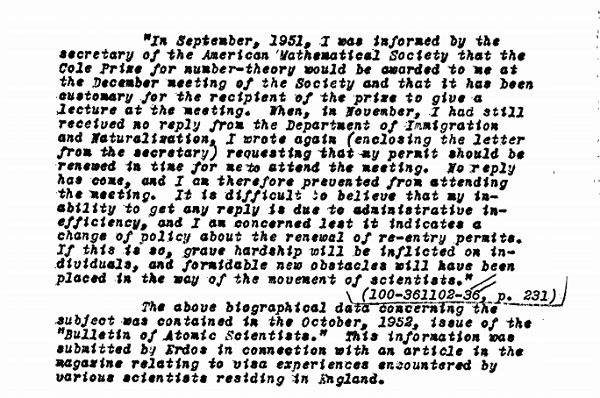 Then, in 1954, he was barred from the country again by the Immigration and Naturalization Service, a situation in which the FBI was seemingly uninvolved. 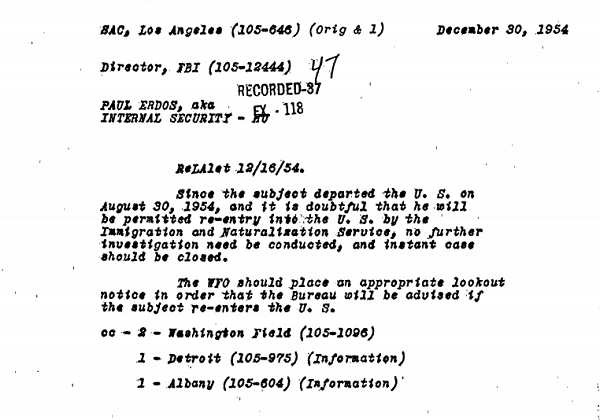 Five years later, he was granted a temporary visa at the behest of Senator Hubert Humphrey, future vice president, and it was determined that without any suspicion, further investigations should not take place. 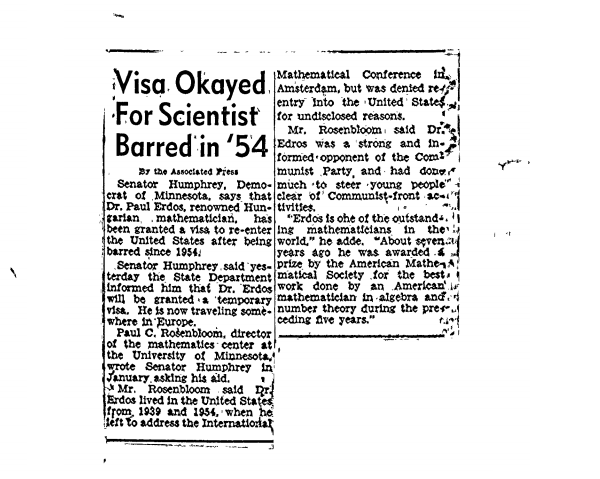 Nonetheless, the FBI continued to keep tabs on Erdős, repeatedly described as one whose propensity for playing Devil’s Advocate did not suggest treachery but rather an appreciation for freedom, mental and political. 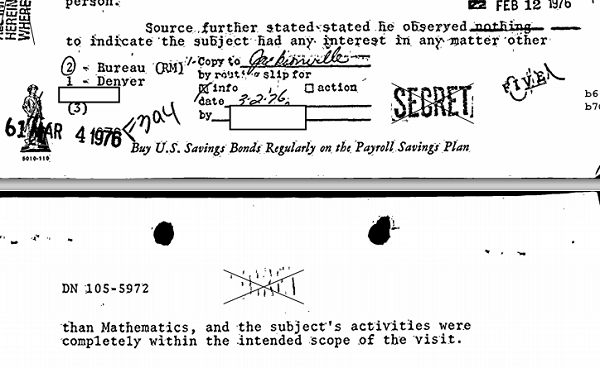 While United States government imported Axis-Power scientists for American use, the Hungarian mathematician failed to produce much fodder for either the military or domestic law enforcement. His FBI surveillance, then, appears little more than a clever way to get J. Edgar Hoover’s name on a paper with Paul Erdős.

Read through the full file embedded below, or on the request page.