A version of this article appears on Beacon Reader

After initially claiming to be unable to locate any such document, the FBI now insists that it cannot release its comprehensive list of police departments across the country that use cell phone trackers.

As first confirmed by MuckRock in September, the FBI signs a non-disclosure agreement with all police departments seeking to use the StingRay family of cell phone surveillance devices. The Harris Corporation, which manufactures the devices, requested that the Federal Communications Commission require law enforcement agencies to “advance coordinate” with the FBI around StingRay deployment.

Harris thus notifies the FBI of all incoming requests for StingRay equipment, and the FBI sends a template NDA to the agency.

It was odd, then, when the FBI replied that it could not track down any listing of agencies that have completed such StingRay non-disclosure agreements.

In a response sent in October, the FBI’s FOIA staff wrote that such a request was “not searchable in our indices,” adding that the agency’s records “are indexed according to individual investigatory interests and not logs of information.” 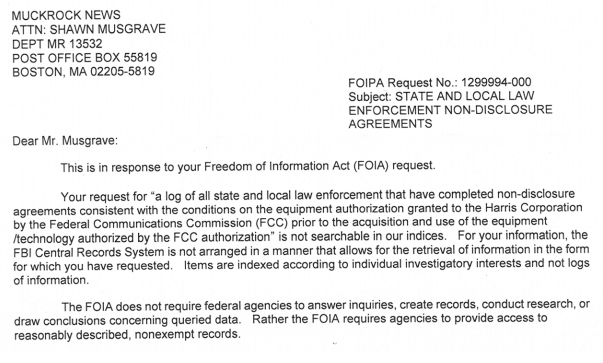 Odd, but not atypical. As noted in our subsequent appeal, the FBI habitually mischaracterizes FOIA requests for administrative records as requests seeking investigative files. In 2012, for instance, FBI FOIA staff answered that they could find no documents pertaining to [the Bureau’s use of drones](https://www.muckrock.com/foi/united-states-of-america-10/fbi-drone-documents-1542/). While MuckRock’s request sought purchase documents and policy guidelines regarding drone deployment, the FBI searched only investigative files, and so came back empty-handed. Only upon losing a lawsuit brought by watchdog group Citizens for Responsibility and Ethics in Washington (CREW) regarding a separate FOIA request did the FBI conduct a good faith search, which in turn yielded thousands of pages of drone documents. That case still [remains in ongoing litigation](http://www.citizensforethics.org/blog/entry/just-how-does-the-fbis-drone-program-a-self-described-domestic-law-enforcem), as the FBI has released only a fraction of its drone files. Here, similarly, FBI FOIA staff replied that they were unable to search its investigative database for any listing of agencies with completed StingRay NDAs. Upon our appeal, the Justice Department switched tactics.

In its [response sent by email last week](https://muckrock.s3.amazonaws.com/foia_files/Musgrave_Shawn_AP-2015-00341.FBI.affirm.modified.grounds.7e.pdf), the Office of Information Policy invoked “modified grounds” with the same ultimate outcome. Rather than claiming inability to find any such listing, Justice Department attorneys insist that “the information you seek is properly withheld in full.” The cited exemption covers “records or information compiled for law enforcement purposes, the release of which would disclose techniques and procedures for law enforcement investigations or prosecutions.” “It is hard to understand how releasing a log of NDAs or the actual text of the NDAs would interfere with investigations in light of the extensive information already in the public domain,” says Nathan Wessler, staff attorney with the American Civil Liberties Union. Wessler notes that the FBI has officially acknowledged the StingRay NDA process in court affidavits, as have a number of law enforcement agencies nationwide. However, since the FBI followed its tried and true practice of first swatting back the initial FOIA as “not searchable” and only asserting substantive rationale for withholding the list upon appeal, the next step to get this basic information is to file suit in federal court. For now, then, the log of precisely which law enforcement agencies nationwide deploy StingRays in hushed coordination with the FBI remains locked away. Stay tuned as MuckRock considers next steps toward greater disclosure of cell phone tracking and surveillance. Read the full denial embedded below, or on the [request page](https://www.muckrock.com/foi/united-states-of-america-10/fbi-stingray-nda-log-13532/#):