The Bureau of Customs and Border Protection (CBP) piloted its first drone along the Arizona-Mexico border in the summer of 2004, and it soon produced results. Over dozens of flights from June through September, the drone assisted in the arrest of nearly one thousand undocumented border-crossers, plus the seizure of more than 800 pounds of marijuana.

The pilotless pilot study in 2004 was enough proof-of-concept for CBP to invest hundreds of millions in unmanned aerial technology over the past decade, and so become arguably the most avid drone operator in domestic airspace.

Monday morning, Department of Homeland Security Inspector General John Roth went on C-SPAN to lay out the reasons he considers CBP drones “dubious achievers” despite more than $60 million per year in annual funding.

An audit Roth’s office dropped last week recommends putting a hold on drone purchases until CBP comes up with better metrics to evaluate the technology’s contribution to border security strategy.

“The difficulty we saw is that when they initiated the program, they didn’t put any performance measurements in place,” Roth told C-SPAN’s Greta Wodele Brawner. “And when you think about good govt, when you think about efficient govt, you always want to ask the program managers, ‘What do you expect to receive? What are the results you expect to receive as a result of this investment of taxpayer money?’”

“They never established any performance measures, so they can’t tell whether the program is a success or not.”

The inspector general report is one in a handful of findings of slapdash planning and questionable accounting for the CBP Unmanned Aircraft System program over its ten-year existence.

Such findings cast a shadow over drones’ role along the border, a role that traces back to CBP’s preliminary vetting of unmanned aircraft in 2004.

CBP released a copy of the feasibility study in response to a FOIA request filed in July 2013 as part of the Drone Census. At first, some eleven months after receiving the FOIA, records staff responded that they were unable to locate any such report. This was a surprising answer given the study’s citation in a number of Congressional hearings, as well as in documents submitted to Congress by then-Secretary of Homeland Security Janet Napolitano in 2010.

Upon appeal and after “much difficulty,” CBP managed to track down the study report in late September 2014.

The fifteen-page report, penned by then-Chief of US Border Patrol David Aguilar, who would later serve as Commissioner of CBP from 2011 through his retirement in 2013, took a frank look at the “start-up” drone technology.

Putting the drone through its paces

The Department of Homeland Security, which oversees CBP, first unveiled its drone aspirations as one plank in the Arizona Border Control Initiative, launched in March 2004. A press release announcing the initiative ballparked that the drone experiment would cost $4 million.

As the study got under way along the border near Tucson, Arizona, another press brief proclaimed, “These aerial vehicles permit greater border coverage and quicker response times in the rugged, desolate areas of the Southwest border.”

The feasibility post-mortem report painted a much more tentative but nonetheless promising picture for the future of border security drones.

After considering a number of drone models for its initial testing, CBP settled on the Hermes 450, which is manufactured by Israeli defense electronics firm Elbit Systems. Today, Hermes is a drone of choice for the Israeli Defense Forces and the British armed forces.

Under the $3.1 million lease, which was modified from a Defense Department contract, Elbit provided CBP with ground control stations, operational crews and support personnel in addition to the aircraft itself, per an Elbit filing with the Securities and Exchange Commission.

“The Hermes was selected because it was determined to be the best combination of operational and cost effectiveness for flight in support of Border Patrol operations on the Southwest Border,” explains the report.

The study was divided into three monthlong phases. In the first, Border Patrol agents and Elbit pilots familiarized themselves with each other and the equipment. Together, they conducted training flights solely in daylight and within a small region of airspace authorized by the Federal Aviation Administration.

The primary purpose of Phase Two, which took the study into August, “was to exercise the UAV over a wider area of responsibility and lengthen mission times to take advantage of the endurance that a UAV provides.” The report is redacted as to the expanded area where the FAA authorized the drone to fly in this second phase, but it was wide enough to allow the UAV team to begin detecting people and drugs being smuggled across the border. Phase Two also saw the beginning of night missions to evaluate the Hermes 450’s infrared camera payload.

The third and final stage continued to scale up operations. Analysts evaluated the drone’s performance in the harsh desert and mountainous environment.

In total, the CBP’s loaner UAV flew 71 flights totaling just under 600 hours throughout all three phases of the study. Across that span, the drone helped Border Patrol agents apprehend 965 would-be undocumented immigrants, 843.38 pounds of marijuana and two stolen vehicles. 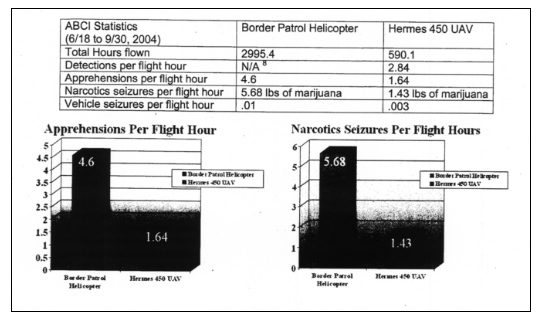 The study assessed operational effectiveness by comparing the drone to seizure statistics from a standard-issue Border Patrol helicopter. Not surprisingly, the established manned helicopters put up far better hour-by-hour numbers when it came to tracking down unauthorized people and goods along the border.

Analysts came to a similar conclusion on comparative cost effectiveness: while the Hermes 450 itself cost half as much as a standard helicopter—$1 million versus $2 million as of 2004, per the feasibility report—specialized UAV equipment translated to much higher operations and management costs (O&M) for repairs and upkeep, as did higher salaries for UAV pilots.

CBP data also pointed to a shorter projected lifespan for the Hermes 450 compared to standard helicopters, which further bumped up hourly operating costs for the unmanned option. The Predator, similarly, was deemed due for the scrap heap sooner than a helicopter and requires specialized piloting, but its hefty $5 million price tag and $2 million in annual satellite costs as of 2004 put it at an even steeper price disadvantage for the study.

Despite their high calculated cost compared to manned helicopters, the Border Patrol chief called for the federal government to invest in unmanned vehicles. His conclusion predicted that costs for the “immature technology” would fall as know-how for flying drones matured.

“UAVs possess certain capabilities missing from comparable solutions such as helicopters,” wrote Aguilar. “For example, UAVs can stay on-station for much longer than a helicopter, and can perform surveillance over a much wider area.”

In one cited case, the drone guided Border Patrol agents to a widely dispersed group of border-crossers, then provided aerial backup so that suspects could not circle behind the agents or hide themselves in the brush. Helicopter pilots flying alongside declared the drone “a tremendous asset.”

“Although today a UAV may not be cost effective in an ‘apples-to-apples’ comparison against helicopters on the Southwest Border,” the report concludes, “a UAV may in the future prove to be a very cost-effective tool to perform duties such as, for example, patrolling long, lightly-trafficked areas of the Northern Border—especially if integrated into a more complete border control system.”

Satisfied of drones’ potential value along the southwest border via its brief study, CBP allocated funds and personnel toward quickly bringing unmanned aircraft up to an operational capacity. This included earmarking $10 million for 2005 and $22 million for 2006, as well as ordering additional study of the surveillance technology’s prospects along the Canadian border.

CBP also made arrangements with the Defense Department to evaluate a Hunter drone from November 2004 through January 2005 along the Arizona border.

Looking to the future, the study noted that haggling with the FAA ate up a considerable amount of time. It predicted that “a significant amount of resources will have to be expended to meet the regulatory agency requirement,” a limitation that would limit Border Patrol’s ability to expand UAV operations to other segments of the border.

Such gripes continue to plague the FAA’s integration of drones into national airspace.

The 2004 feasibility study launched CBP’s drone program on a trajectory of cautious optimism. Over the next ten years, the program would expand from a single unit into a fleet of nine Predators. But critics today accuse CBP of lax vetting, and challenge the agency’s drone overseers to justify hefty sums spent to date and to return to the program’s roots in frank evaluation grounded in basic data analysis.

Moving forward, Customs and Border Protection must satisfy the Inspector General that its drone program has rigorous performance metrics in place.

See the full report embedded below, or on the request page here: