The FBI has declined to elaborate which particular lessons it gleaned from Katrina as far as cell phone tracking. But the agency’s Wireless Intercept and Tracking Team (WITT) cited the hurricane’s damage to justify additional procurements of cell phone tracking equipment.

After local first responders — including New Orleans Police Department and the Louisiana State Police — were “decimated” by the hurricane, the FBI and other federal law enforcement deployed hundreds of agents to assist in search and rescue and to address widespread looting. Subsequent assessments criticized that the federal response was uncoordinated, but the FBI entered the fray in force. The bureau dispatched tactical teams, medical personnel and senior management alike.

A year later, as part of post-Katrina review, the FBI’s WITT requested funding for additional equipment from Harris Corporation, which manufactures the StingRay line of cell phone trackers. Two drafts of the same memo (draft 1) and (draft 2) from July 2006, each with competing redactions, together weave a partial glimpse of WITT’s justification. 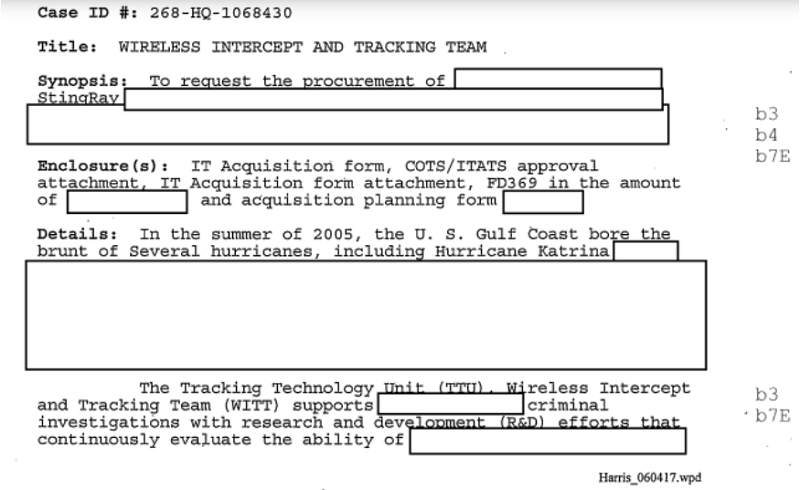 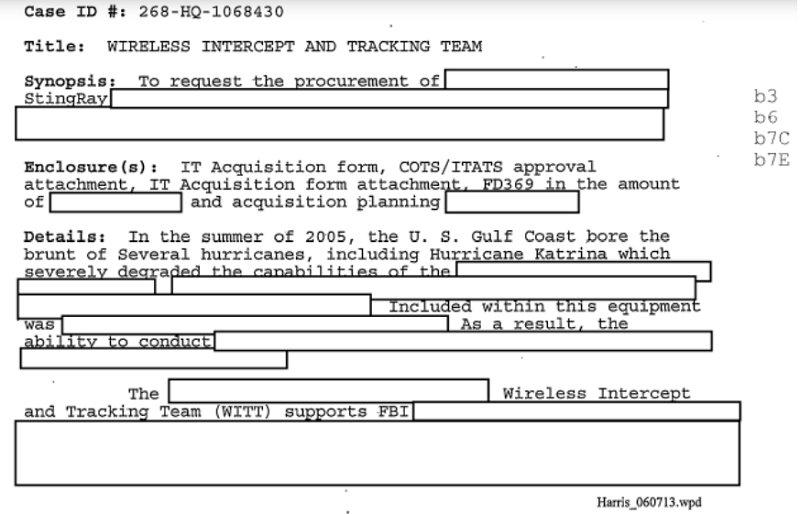 “In the summer of 2005, the U.S. Gulf Coast bore the brunt of several hurricanes, including Hurricane Katrina which severely degraded the capabilities of the [redacted],” the memo reads in part. Subsequent, heavily redacted sentences suggest that the storm crippled the FBI’s capacity to conduct certain types of cell phone tracking operations via equipment on-hand at the time of landfall.

Redactions obscure which particular equipment would solve issues illuminated in the “aftermath of these gulf storms.” Released portions of the memo make clear, though, that WITT “determined that it is essential” to purchase additional items from Harris Corporation. Where previous purchase requests for cell site simulator devices and software were classified as “Routine,” the July 2006 request was deemed “Priority”. 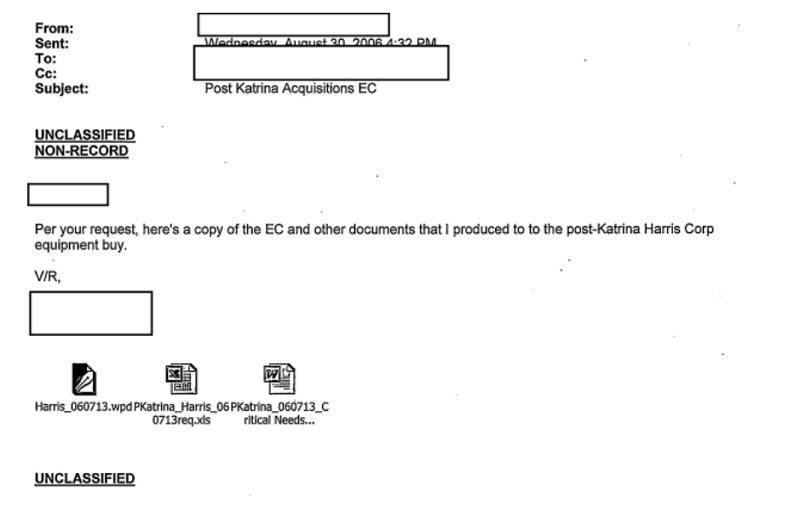 An August 2006 email, to which the second copy of the memo was attached, refers to the “post-Katrina Harris Corp equipment buy.” An accompanying email attachment, which was withheld in full, notes “critical needs” following the storm. 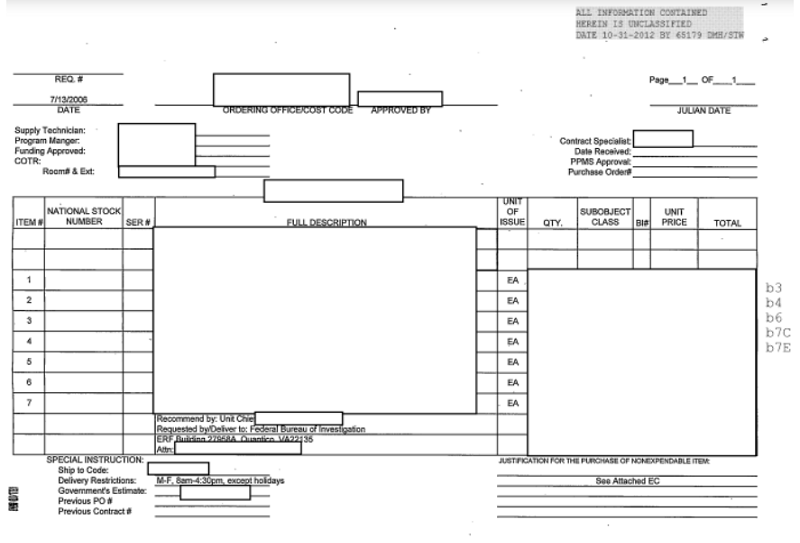 The accompanying procurement spreadsheet lists seven items. All descriptions, quantities and prices are redacted from the form.

These documents were among the nearly 5,000 pages that detail the FBI’s use of cell site simulators, which were released to MuckRock in April. This cache of StingRay documents is identical to that released to Daniel Rigmaiden pursuant to his ongoing litigation against the Justice Department for StingRay documents. Rigmaiden’s lawsuit forced the FBI to remove redactions of references to the Harris Corporation — among other “dirty words”, to use the judge’s term — from nearly documents previously released to the Electronic Privacy Information Center in 2012 and 2013.

Given the redaction of product names, it is likely that the FBI purchased a StingRay upgrade (or another piece of equipment with augmented capabilities) the existence of which the agency argues is not sufficiently public as to be a “dirty word.” The FBI took this position recently with regards to Harris Corporation’s portable KingFish model of cell phone tracker.

“At this time, the FBI declines to comment with regards to your request,” answered spokesperson Shanna Daniels, when asked what prompted WITT to consider the cell site simulator procurement to be “essential.”

Whatever the particular equipment, Hurricane Katrina prodded the FBI to request a substantial purchase from Harris Corporation. And ten years later, we’re still trying to piece together how the FBI uses cell phones as location trackers.

Image by Marvin Nauman via FEMA.gov

FBI agreements with Harris Corp/Boeing and meeting minutes re: Stingrays