As we reported earlier this month, the vast majority of states — 37 so far — have released spreadsheets detailing which police departments received military equipment via the Pentagon’s 1033 program.

Only six states — Massachusetts, Michigan, New Jersey, North Carolina, South Dakota and West Virginia — refused outright to provide data down to the agency level, while another six states claimed not to have that particular spreadsheet on hand. And then there’s Louisiana, which wants a cool $5,000 for photocopies of its paper inventory documents.

The Defense Logistics Agency, which administers the 1033 program nationwide, has a different take. Where many individual police and sheriff’s departments are themselves eager to share details of which equipment they got via 1033 disbursements, the DLA has arbitrarily decreed that the county level is the most granular they’ll go as far as releasing 1033 equipment transfer data for tactical equipment such as weapons, vehicles ,and night vision.

The DLA will name individual departments that are enrolled in the 1033 program, but refuses to disclose the same data that 37 states have released. 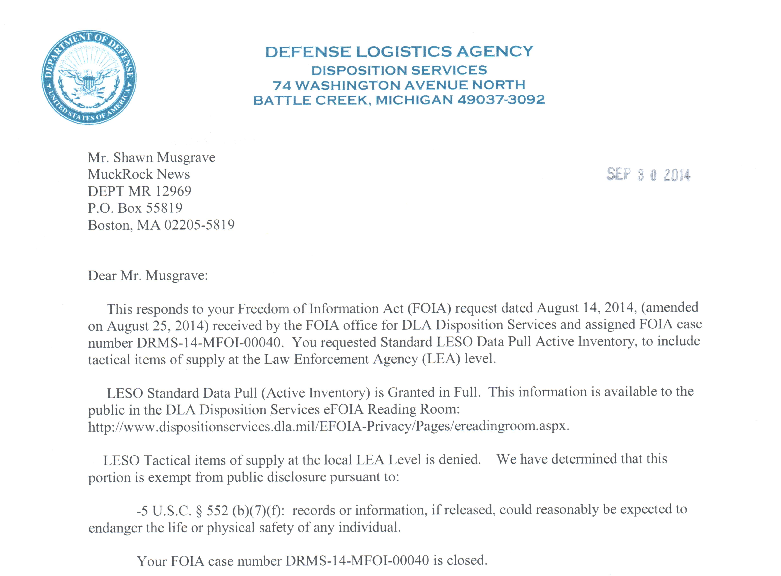 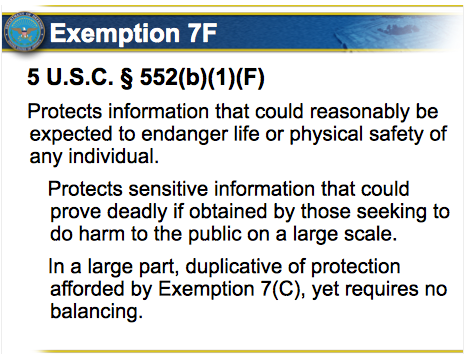 Summarized by the Justice Department, exemption 7(f) most commonly protects the identities of law enforcement officers, witnesses or other individuals involved in law enforcement matters. To uphold redactions under this exemption, courts usually require agencies to articulate specific individuals whose safety might be threatened by release of the requested documents.

The DLA’s letter provides no such explanation as to how the requested equipment transfer database could “reasonably be expected” to put any individuals in danger. Again, three-fourths of the states saw no such threat.

Lawmakers and open government advocates at the federal, state and local levels have called for increased scrutiny of the transfer of military equipment to local police departments. True accountability for the 1033 program requires transparency as far as which departments received which equipment. MuckRock is appealing the Defense Logistics Agency’s vague rejection, and is committed to unearthing as many documents as possible regarding this program.

If you’d like to help, check out our ongoing fight in Massachusetts, and if you’re resident of one of the holdout states, let your representatives know you’re not happy.

Shawn Musgrave sent this request to the Defense Logistics Agency, Disposition Services of the United States of America