At the 2010 Winter Olympics in Vancouver, the Department of Homeland Security field tested a new initiative to mine online news and social media streams — everything from Twitter to Wikileaks to ESPN — for “situational awareness.” One Olympic cycle later, there have been some tweaks to the tweet-sifting methodology, but its aim remains unchanged: parse trends in the social media echo chamber, and maybe even get a jump on breaking events as they unfold.

Documents released to MuckRock partially outline the evolution of the Media Monitoring Capability from 2010 to date, as well as efforts by the DHS Privacy Office to refine what information the project does (and does not) monitor.

In September 2013, the DHS Inspector General published an audit of operational use of “Web 2.0 technology” within Homeland Security and its components, which include such law enforcement agencies as U.S. Secret Service, Immigrations and Customs Enforcement (ICE) and the Bureau of Customs and Border Protection (CBP).

The Inspector General determined that homeland security agencies have increasingly “recognized the value of using social media to gain situational awareness and support mission operations,” including for “law enforcement and intelligence-gathering efforts.” The final audit report concluded that “additional oversight and guidance are needed to ensure that employees use technologies appropriately” without jeopardizing personal privacy.

Of all DHS components, the Inspector General noted that the National Operations Center, the information-sharing unit which houses the Media Monitoring Capability, was among the first to use social media as an operational tool. The audit team reported that the NOC “is in compliance with DHS privacy policies for the use of social media for monitoring and situational awareness.”

The DHS Privacy Office first reviewed the project’s privacy compliance in August 2010, following the initiative’s three event-specific pilots. In addition to the Vancouver Olympics, DHS stress tested its social media monitoring around the Haiti earthquake in January 2010 and the BP oil spill that April.

The August 2010 review determined that the Vancouver pilot followed pre-launch privacy guidelines, which established that analysts were limited to “only monitoring publicly available online forums, blogs, public websites, and message boards to collect information.” Monitored sites included not only Twitter and comment boards at popular sports blogs, but also Wikileaks, Cryptome, STRATFOR and a number of other homeland security sites. 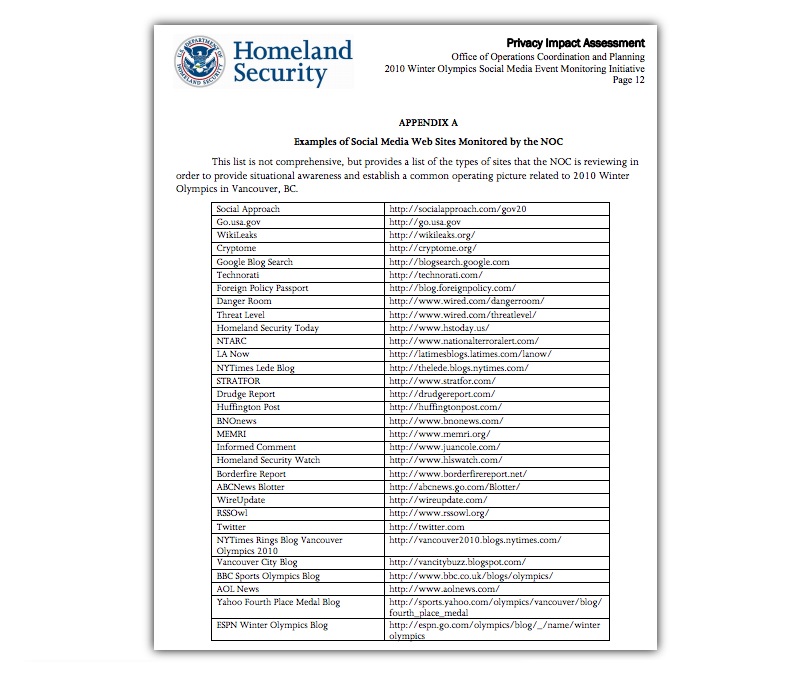 The IG review found that analysts appropriately restricted their review to public sites using “predefined search terms to discover items of interest,” and that any personally identifying information collected in the process was appropriately redacted. Beyond the above list of sites, auditors note that targeting “focuses on issues, geography, events, and other special de-identified characteristics.”

A subsequent privacy review in May 2012 gives a better sense for just what types of information DHS social media sleuths may have pulled from the Olympic fray four years ago. DHS analysts distill these various streams into “Items of Interest” reports to facilitate trend analysis.

The project expanded from event-specific pilots to a permanent endeavor in June 2010. Given security concerns at the Sochi games, DHS agents are surely reviewing Olympic blogs, Twitter handles and all manner of social media feeds once again.

MuckRock is continuing to review the privacy impact documents for details of how Homeland Security and its analysts use online communities in law enforcement, intelligence and other operations.