Phil Eil’s is one of classic FOIA frustration — enthusiastic investigation brought to a halt by the inefficient system upon which it depends. The topic, broadly, is the climate of prescription drug abuse in America. “It’s a subject that’s clouded with so much emotion, misinformation, and suspicion, which is all the more reason to talk about evidence,” Phil described in a recent phone interview with MuckRock. “But that evidence hasn’t been released.”

The evidence in question was that used in USA v. Volkman. Phil, now a Providence-based freelancer, had just been accepted to a graduate writing program in 2009 when his father first told him of Dr. Paul Volkman. The elder Eil and Volkman had been classmates at the University of Chicago, and the latter’s life had taken a sordid turn. “My dad had fallen out of touch with this guy after medical school,” Phil says, “and he got a call out of the blue from him asking if they would go to his wife’s funeral.”

At the time, Volkman was under federal indictment for a massive prescription drug-dealing scheme. Prosecutors in Southern Ohio claimed he had caused the overdose deaths of more than 15 of his patients. Phil’s interest was piqued.

In fall 2009, Phil wrote to Dr. Volkman, requesting an interview; that December, he conducted his first discussion with him. And very quickly, Phil realized that in this complex, high stakes story he had the beginnings of a book.

“There are some really interesting threads here,” Phil says. “The first is the story of this MD/PHD who was now facing a federal prosecution. The second thread was the story of Portsmouth, Ohio, the down-and-out former industrial town with a history of prescription drug abuse where Volkman was working. And the third involves the medical specialty of chronic pain management and all of the controversy surrounding opiate pain medications.” 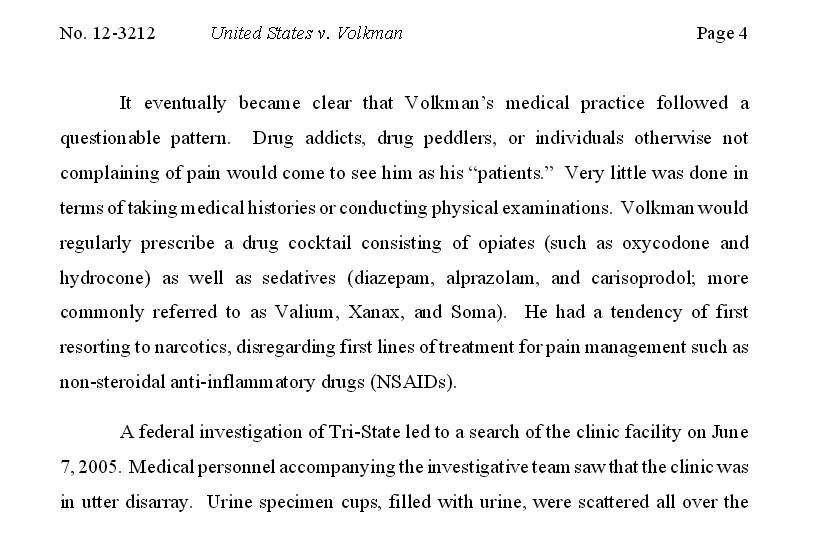 Volkman’s trial ended in Federal Court in 2011. He was convicted and received four consecutive life sentences — one of the largest criminal sentences for a doctor in U.S. history. The next, clear step, it seemed to Phil, would be to take a look at the evidence, see what the Court had used to lay guilt on this man. But, of course, what then followed was not so straightforward.

“Basically no one let me see the evidence,” Phil says. “The clerk, the lawyers in the case, the judge, the U.S. attorney’s office—nobody. Everybody said no. Which I think is wrong, but I still haven’t pinned down what the exact legal status of trial evidence is.”

“After hitting a number of walls, I filed a FOIA request on Feb 1, 2012 with the Executive Office of U.S. Attorneys. The request was really simple. I had the list of evidence from the trial, and I basically said, ‘Here’s what was shown at the trial. Can I see it?’” 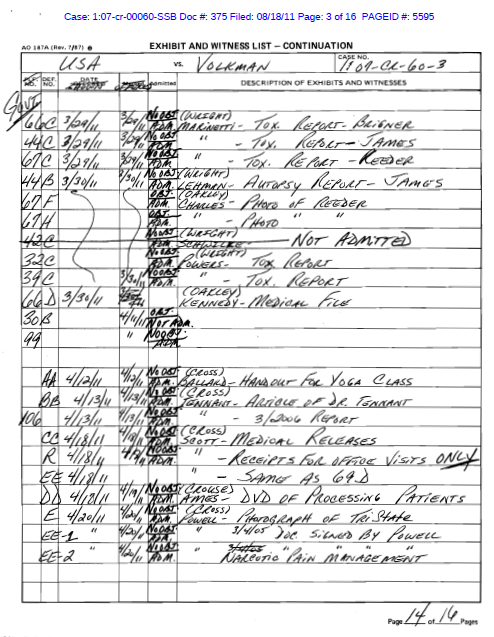 He had initially sent EOUSA a check for $1,000, and after nine months, the money was returned, along with the message that the agency would require $154 for the “review fee” and that the request had been transferred to the Drug Enforcement Administration. They acknowledged the request in early 2013. 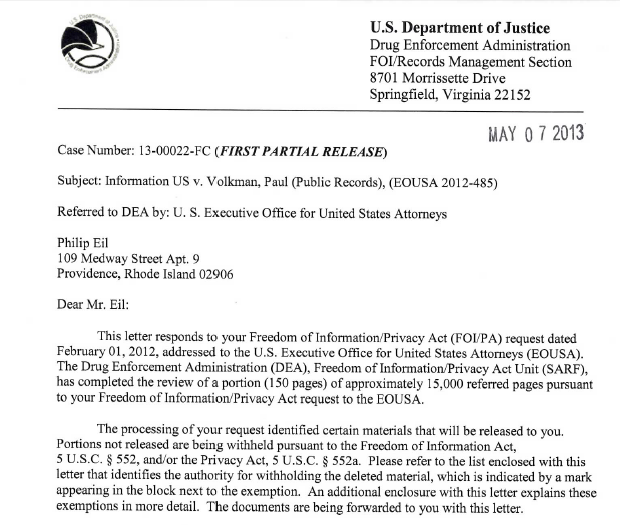 “They tell me that it’s approximately 15 thousand pages, and since then they’ve been sending small packages that are theoretically fulfilling my request. But it’s unclear what part of the request is being fulfilled,” Phil says. 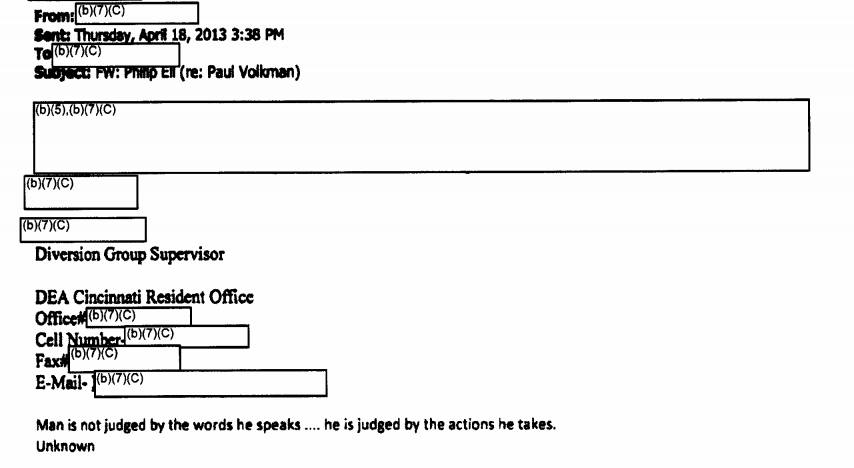 “And 33 months after it was first acknowledged by the Executive Office, less than 25 percent has been processed and more than 80 percent of that has been redacted. Three and a half years after Volkman’s verdict, and I have a very small fraction of the evidence used to convict him.” 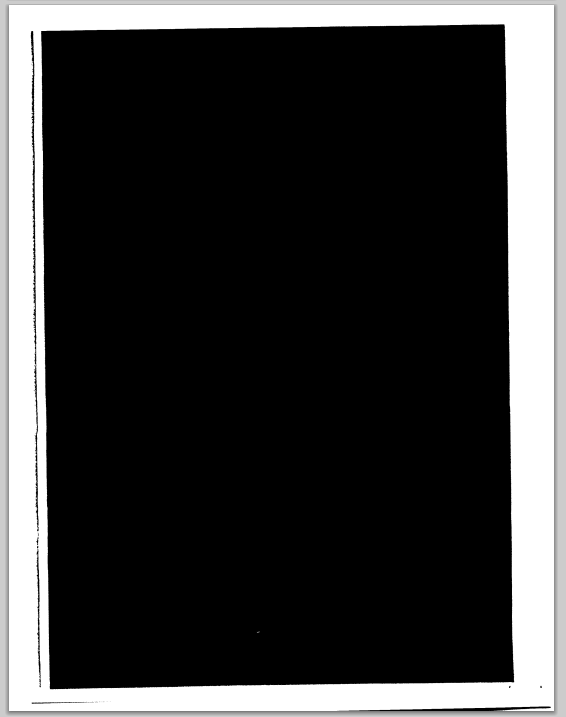 “At one point during this process, when I made a call to the DEA’s ‘FOIA Requester Service Center’ hotline seeking an estimate for when work would be done on my request, two people – the ‘specialist’ working on my request, and her supervisor – denied me that estimate.

Such estimates are, of course, guaranteed by the Freedom of Information Act, and when I pointed this out in a follow-up email, they ultimately sent me an estimate of five months. This was in November. So, according to their own estimates (which I don’t necessarily trust), this request will be completed by April 2015.” 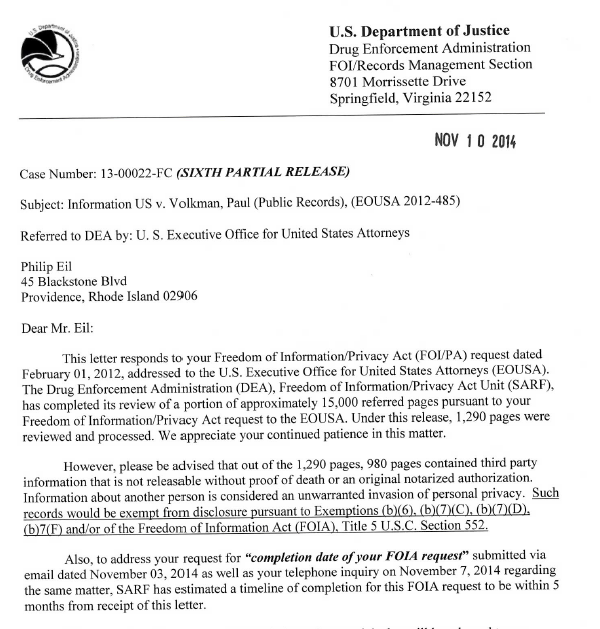 These wheels turn imperceptibly and inconsistently. Phil, in a not uncommon response, has grown increasingly agitated over the lack of transparency in the release of the documents, the process itself, and the inability to discuss the content of the trial until the completion of his request. He’s sent a letter to his Senator with more complaints on the way. Fortunately, there has been progress, with a letter to his senator prompting this response: 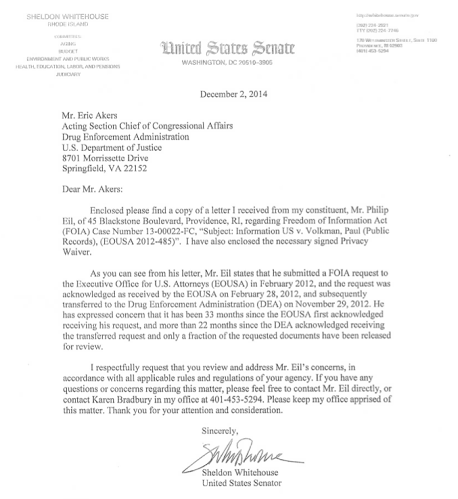 “I’m not out to exonerate Volkman, but we should be able to talk about this,” Phil says. “The federal government paid for his high level of education — his and my father’s MD/PhD program was federally funded — and then a few decades later came to investigate, prosecute, and convict him. You as taxpayers, paid to investigate, prosecute, call a jury, judge, and incarcerate this man. We paid for this whole f–king thing.”

Through MuckRock, he’s also submitted two requests for the processing notes associated with his requests, one which has already been completed, and is embedded below.