The FBI’s file on the 2004 Madrid train bombings is massive, so we asked for help digesting them.

Here’s some of the most interesting finds in the 3,853 pages, tweeted to us by some of the top public records sleuths around: you!

Heather Akers-Healy (@abbynormative) uncovered a request (p. 1237) from the New York FBI office for an unknown agency to perform “all relevant database checks” for particular email addresses obtained during the investigation. The office indicated that it “consider[ed] the subjects of the 3/11 Madrid Bombings, and their associates, to be a significant threat to the National Security of the United States.” 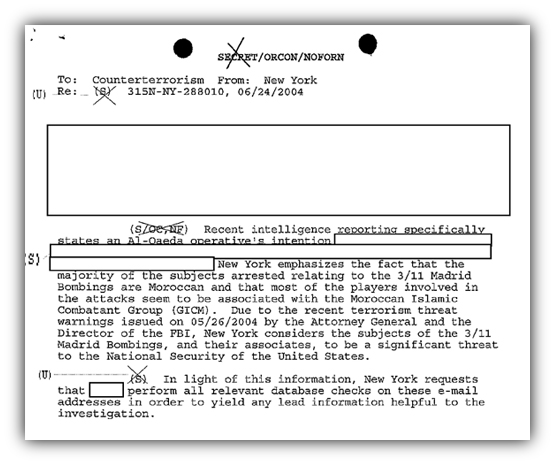 Bradley Campbell (@bbcbjc) found that the FBI’s Cleveland office also helped identify a suspect (p. 1861), and even brought a pensioned officer out of retirement (p. 1894-1896). 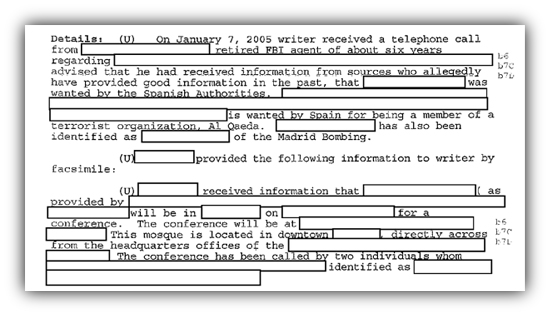 The retired officer contacted FBI investigators to recount a tip from a reliable source that one of the bombing suspects would be at a conference at a mosque in a redacted location.

Just two pages later (p. 1896), though, Bradley caught that the FBI failed to redact a reference to the conference location in Caracas, Venezuela.

ᴅᴧτᴧ ᴘοᴙᴎ ѕтᴧᴙ (@datapornstar) found a number of breadcrumbs in the file, including one frank email exchange (p. 564-565) over the FBI’s fingerprint scandal that falsely accused an Oregon lawyer of involvement in the bombing: 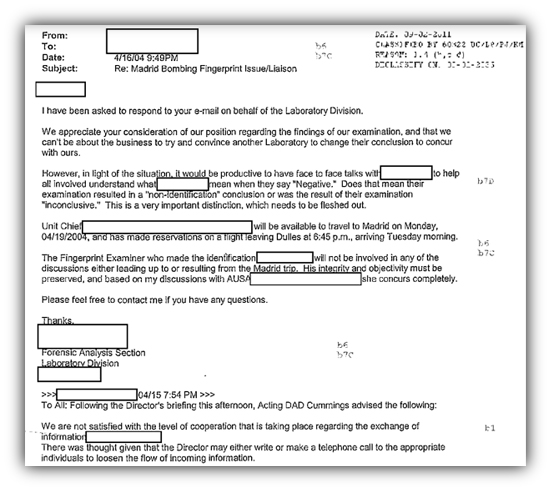 ᴅᴧτᴧ ᴘοᴙᴎ ѕтᴧᴙ also cross-checked cables in the Madrid file with those released by WikiLeaks, and found that Bureau FOIA officers heavily redacted documents already available in full online. Compare this June 2005 cable (p. 2562-2564) from the Madrid embassy to then Secretary of State Condoleezza Rice with its WikiLeaks version:

We know that this is just the tip of the iceberg. Already, we’ve filed a few FOIA requests based off of the files and the findings above, including one for the FBI’s files on “Operation Conquistador” (p.30) and guidance to FBI classification officers for handling documents already released by WikiLeaks.