MuckRock user Robert Delaware requested copies of complaints against Yelp to the FTC from the last four years, and got back 700. That amounts to almost one complaint filed every two days, with most coming from small-scale entrepreneurs who are especially vulnerable to online reviews.

The most frequent complaint lodged against Yelp was the company’s alleged practice of trading positive reviews for money. Business owners charged that Yelp called businesses to sell advertising on the site for $300-$350 per month. (Advertising fees varied between $300, $325, and $350 among complaints.) If a business declined the offer to advertise, complaints say Yelp deleted the positive reviews on that business’ page, claiming that the site had updated its “automated algorithm” to reflect a “truer” sense of the overall reviews.

One complainant alleged that Yelp’s shifting algorithm deleted 42 of a business’s 47 reviews. Another complaint said a business’s four-star (out of five) rating was dropped to two after the removal of 11 positive reviews.

Other complaints to the FTC criticized Yelp’s lack of accountability, both to the veracity of its reviews and to the company’s would-be customer base. Many business owners reported Yelp as intractable about incorrect information on its site. One complaint states, “Yelp has essentially fabricated a business location that does not exist using my name.” Another states, “Yelp.com is displaying a review of my company that is not my company. It is from a name I never worked for in a town I never worked in.” 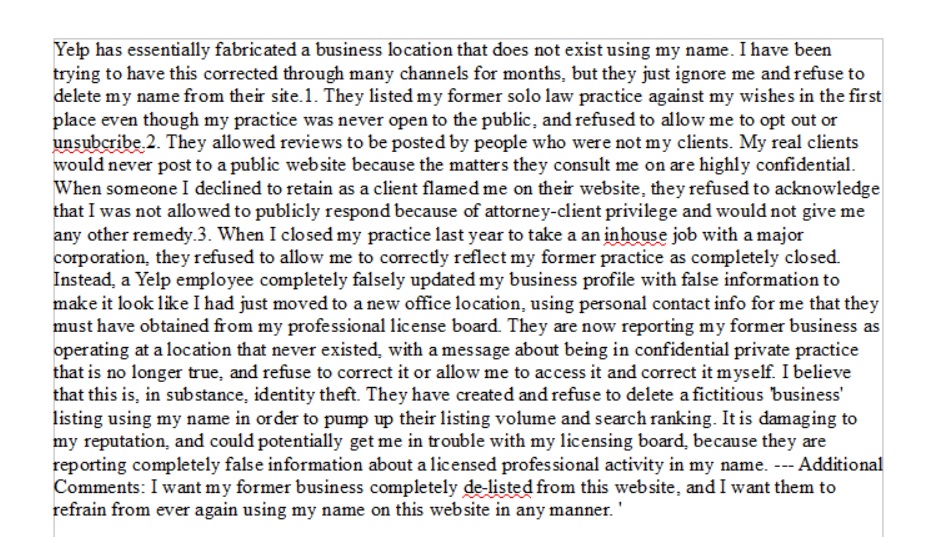 Several others declared that Yelp listed their home address instead of their office address, and that Yelp refused to hear their privacy concerns. Many business owners complained that they lost business because Yelp wrongly listed that their business was closed, and refused to correct the error. The mysterious movements of Yelp’s mercurial algorithm led to one bizarre situation, in which “Yelp said [a] business was closed and started a new account for the same business filled with only negative reviews.”

Complainants also alleged that Yelp refused to delete or modify reviews even when one could be verified to be fictitious. One spa owner complained that a reviewer falsely claimed that she was forcibly locked in the spa by employees and was forced to call the police for help. The spa owner complained to the FTC that they sent Yelp a Phoenix police report listing the calls made on the day the illegal confinement supposedly occurred to prove the police had never been called to the spa. Yelp reportedly refused to respond to the spa owner’s complaints and the review remained on the site. 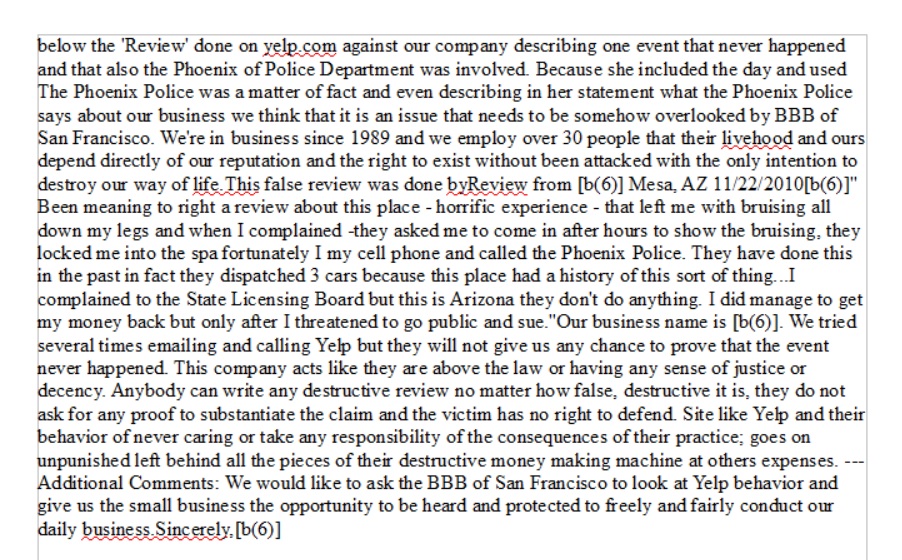 Other business owners had more abstract concerns about Yelp. One complaint raises the possibility that Yelp violates the FTC’s regulations on testimonial advertisements and endorsements, which state that any conflict of interest must be explicitly stated, since Yelp pays frequent reviewers indirectly through free food and drinks at gatherings organized by the company. Others complained that Yelp’s virtual shrug at the veracity of its users’ reviews invited extortion for free products or services by malicious customers, since any rejected would-be freeloader can post an unverified negative review against the business in retaliation.

The text of the complaints has been embedded below, and the full release can be red on the request page.