The FBI has released its file on the late transparency activist Aaron Swartz.

The files make no mention of his alleged intrusion into the JSTOR academic journal system, for which Aaron was facing criminal charges when he ended his life. 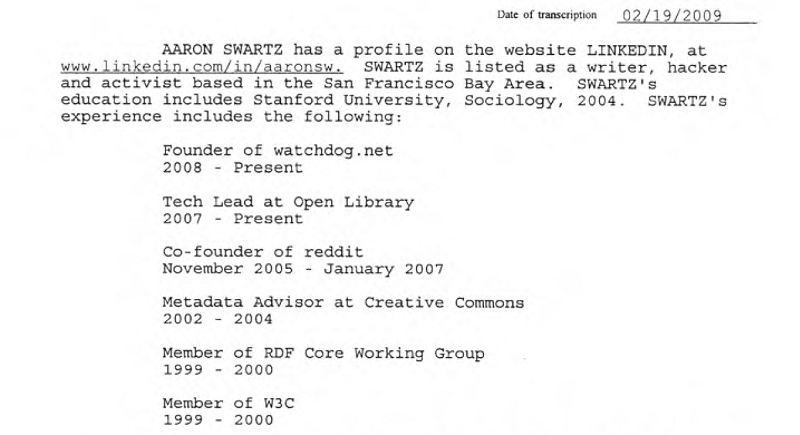 Instead, the 21-page file mostly focuses on Swartz’s use of PACER (Public Access to Court Electronic Records).

In 2009, the FBI says Swartz compromised login information from the Sacramento County Public Law and Seventh Circuit Court of Appeals libraries and downloaded about $1.5 million worth of documents - more than 18 million pages.

The system, which normally charged a per-page fee for accessing documents, was available freely at certain libraries, a fact which Swartz used to bulk download materials.

FBI’s Washington office asked the Chicago division to locate Swartz, which they did in February 2009, later contacting the coder and writer on April 9, 2009, documents indicate.

“It is pretty silly that instead of calling me up, they sent an FBI agent to my house,” Swartz told Wired in an interview.

Though Swartz appeared to have broken no laws, he was advised by a friend to “lay low for a while.”

The investigation appeared to be inconclusive, with an indication that the Bureau wasn’t quite sure how Swartz did what he did.

Swartz himself was keenly aware of the FBI’s interest in his activities, as the file itself notes.

Image by Ragesoss via Wikimedia Commons and is licensed under CC BY-SA 3.0