In a September 2011 memo released to MuckRock, Boston Police Department Commissioner Edward Davis outlines how BPD and its officers are authorized to use automated license plate recognition (ALPR) technology and data. In particular, the memo reveals BPD’s capacity to retain ALPR data indefinitely for investigatory purposes.

Law enforcement agencies nationwide have increasingly adopted ALPR technology to scan car license plates for quick comparison against police databases. The scanners can be installed at fixed locations along roadsides or mounted on patrol vehicles.

Privacy and civil liberties advocates across the country have raised concerns over the potential for ALPR technology and data to be used to monitor individuals by tracking vehicle locations over time. In particular, the ACLU and like-minded organizations have sought to clarify law enforcement agencies’ policies regarding ALPR data usage, storage, retention and sharing with other entities.

In June 2012, the BPD revealed that it operates four ALPR units citywide, purchased at a cost of “approximately $100,000.” A September 2012 letter to the ACLU of Massachusetts indicated that these four units read 3,630 license plates on average around Boston each day.

BPD acknowledges the privacy issues surrounding use of ALPR technology by law enforcement, even if only briefly. The memo establishes that the department’s avowed purpose in utilizing ALPR is to “increase the efficiency and effectiveness of its public safety efforts” while safeguarding “the legitimate privacy concerns of law abiding citizens.”

Toward maintaining that balance between public safety and privacy, the memo aims to clarify protocols for using ALPR. But in addition to outlining specific authorized applications of ALPR systems and data, the guidelines remain vague and seemingly permissive in leaving terms like “legitimate purposes” undefined.

The commissioner’s order outlines BPD’s main ends for using ALPR scanners: particular aims include identifying criminals and their vehicles, identifying stolen vehicles and assisting in missing persons cases. But the list includes an additional, rather broad, application: ALPR may be used for “preventing crime through the collection of data for legitimate intelligence purposes.”

ALPR scanners check vehicle plates against BPD “hotlists.” According to the memo, these lists are developed by BPD or “provided to the Department from another law enforcement entity,” and are updated at least once per week. Enumerated hotlists include license plates associated with reported stolen or wanted vehicles, AMBER alerts, outstanding arrest warrants and sex offenders. But here, again, the memo indicates that this list is not exhaustive, as hotlists “include but are not limited to” these categories.

The guidelines also leave unanswered the particular channels by which a particular license plate might be added to a given hotlist. It outlines two methods: via an “investigatory inquiry request” or by manual plate entry. The former method entails supervisor approval and the submission of an ALPR Entry Request Form. In turn, this form requires: a stated reason for the inquiry, a date for removing the license plate from the requested hotlist, and the action to be taken should the vehicle be encountered.

Here, again, the stated investigatory reason must be “legitimate” and the purpose “specific,” ostensibly as defined by the requesting officer and his or her supervisor. Furthermore, the memo includes no guidance in determining how long an officer may maintain particular license plates on hotlists. The ALPR request form asks the requesting officer to set an expiration date, at seemingly arbitrary discretion. 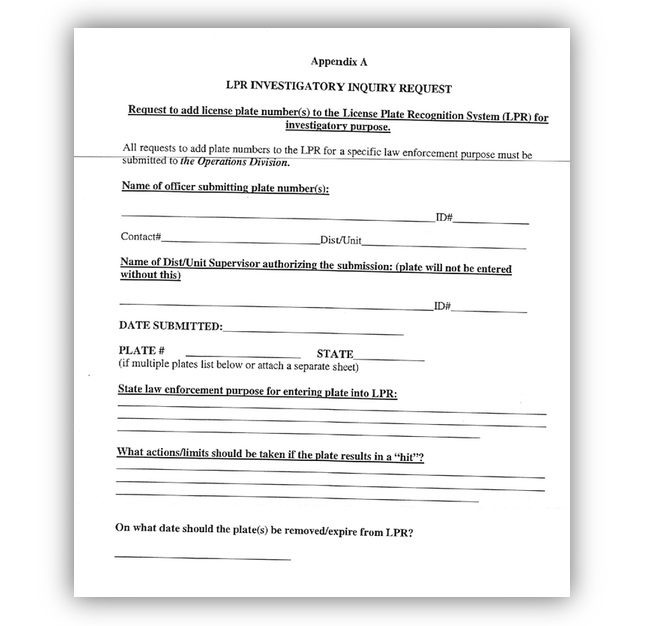 While LPR entries submitted via the investigatory inquiry process allow requested license plates to be checked against future scans until its hotlist entry expires, plates entered manually by officers on shift are automatically deleted “at the conclusion of the tour of duty.” Whereas the investigatory inquiry process requires supervisory oversight, the guidelines for manual plate entry are considerably broader.

The memo establishes that officers may enter individual license plates into the ALPR system in cases of AMBER alerts or “be on the lookout” (BOLO/APB) bulletins. But it is unclear whether these are the only two instances in which individual plates may be entered without supervisory approval by on-duty officers. While officers must enter a reason for entering an individual plate, it is unclear whether that reason is deleted along with entered plates at the end of his or her shift. Again, what constitutes a valid reason for entering individual plates remains undefined.

The order outlines two types of scans and the chain of command for each. Random scans may be implemented by ALPR patrol units on the order of a duty supervisor to collect license plate information for comparison to hotlists and plates entered into the system individually.

Directed scans, however, are restricted to a “defined geographical area,” and must be ordered by BPD brass. Directed scans may be deployed proactively “for purposes of an ongoing investigation or an intelligence gathering operation,” or reactively “as a result of an incident.” The guidelines fail to identify particular circumstances or incidents that might trigger directed scans. The protocol also permits unlisted “other uses” for ALPR systems beyond random and directed scans, subject to the approval of the Superintendent in Chief. 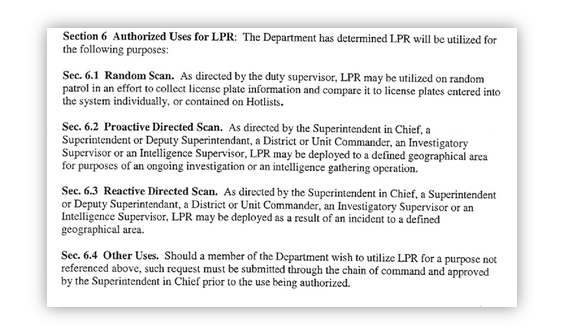 BPD retains general ALPR data, which seems to include vehicle location data collected via random scans, for 90 days. However, if such data “is needed for investigatory or intelligence purposes and for discovery/exculpatory evidence,” the department can retain the data indefinitely.

The memo states ALPR data will be secured “in a manner such that it cannot be added to, modified, accessed, destroyed, or purged except by BPD personnel authorized to take such actions.” Authorized personnel include all officers with access to BPD’s CopLink database, as well as those who request access through a Duty Supervisor or Unit Commander.

In its cover letter to the released memo, BPD asserts that “LPR data is not shared with any outside agencies, corporations, or other entities.” The memo only mentions other law enforcement agencies with respect to receiving information for generating hotlists, and provides no protocol for authorizing the release of ALPR data to outside agencies. All requests or subpoenas for ALPR data are to be referred to BPD’s legal advisor.

Read the full release embedded below or the request page.

Shawn Musgrave sent this request to the Boston Police Department of Boston, MA