The deal Fontana Police Department struck with Axon sounded simple enough: a trial of five inexpensive body cameras and, for each of them, a Professional subscription to the company’s cloud storage system.

When the California city decided to use a different vendor years later, however, it found itself stuck continuing to pay $4,000 per year for an unused service. Exiting the contract, the department was told, could tarnish the city’s credit rating — even though the contract included a “termination for convenience” clause to avoid just that situation.

“When it comes to these body cameras, the equipment is nothing,” said Lieutenant Joseph Binks of the FPD. “What ends up costing you money is the storage.”

FPD was one of many agencies that, in the wake of highly publicized police shootings, decided to explore one of the Taser manufacturer’s new products, the Axon body camera. Not yet ready to make a forcewide investment in the summer of 2014, the department opted for five Axon body cameras at $299 a piece and access to Evidence.com, the company’s data storage platform, for which it charged an annual license fee of $588 per subscription.

Three years later, the city issued a formal Request for Proposals, ultimately awarding the bodycam contract to another company, Visual Labs. FPD discontinued its use of the Axon body cameras, and Evidence.com became increasingly irrelevant. Nonetheless, as part of the five-year agreement with Axon, the department continued to pay over $4,000 a year for the service.

“Our IT people came to me and said, ‘Hey, we have this contract with them that we’re continually paying on, but we’re not using them anymore. Is this something we can look at getting out of?’” said Binks, who handles departmental purchasing. “We did an audit and all the cases that we were working had all been [closed], so we really didn’t need a contract with them.”

He asked Sergeant Scott Snyder, who handles FPD’s Taser program, to reach out to the Axon representative about terminating the agreement. Until 2017, Axon was known as Taser, producer of the namesake stun gun, and it’s through this product that many police departments made their acquaintance with the company.

“To move down to a Lite account would require cancellation of your current contract,” Axon’s Allen Sliper wrote in response to Snyder’s inquiry.

According to Axon’s reponse, the department’s options were limited.

“The only cancellation term is Termination for Non-Appropriations or a lack of funding,” Axon’s representative wrote back and advised that cancellation could come at the risk of a black mark on the city’s credit rating. His suggestion was to “ride out the rest of the contract,” rather than cancel it.

“It sounds like they have us tied to the post on this contract,” Snyder reported back to the City’s administrative analyst.

“Ultimately, we found out that our five-year contract wasn’t up until November of this year, and we couldn’t get out of the contract earlier without affecting the city’s credit and all that kind of stuff, because we had already paid on it,” said Binks.

Sliper’s summary, however, was inaccurate. According to purchase orders, emails, and the terms and conditions of the agreement released by FPD, the order for the five body cameras included two other options for cancellation in addition the Termination for Lack of Appropriation clause: one for a Contractor’s failure to deliver as promised; the other, for a Termination for Convenience.

“The laws and rules on that sort of thing differ state to state and municipality to municipality,” said Tom Papson, a lecturer at George Washington Law School. “One hallmark of government contracts that differentiate them from commercial contracts is what’s known as a ‘termination for convenience’ clause. That clause is included in most government contracts and it generally gives the government the right to terminate (cancel) the contract for almost any reason (although such a termination may have cost consequences for the government).”

The particular Termination for Convenience clause associated with FPD’s Axon body camera purchases allows the agency to determine the extent to which the contract is terminated. Despite what the department had been told by its Axon sale representative, it was still within its rights to cancel the contract.

But between turnover within the police department and a trusting approach to its relationship with the company, neither the IT department, which handles payments for recurring annual technology costs in the City of Fontana, nor the police department had actually consulted the specific terms of the agreement until contacted for this article.

“I met with [the IT employee] who would have been in charge of the contract, and we both read it together, and he said, ‘You know, that’s not something that we even looked at, because the decision was made by the Chief of Police at the time,’” Binks said. “This is the first I’ve ever seen of the contract. And I agree with you, looking at the Termination for Convenience, it does look like, yeah, if we made the decision to get out of this contract, we should have been able to get out of this contract with them.”

As part of its release to a MuckRock California Public Records Act request, Fontana also provided its evaluation of bids in the 2017 search for a body camera purveyor; Axon came third in a field of seven contenders. The agency cited features available from its winning company that were not present on the Axon model, including the ability to securely and easily send digital evidence to the District Attorney. Binks estimates that between 150 and 160 officers are now outfitted with body cameras that also serve as cell phones, capable of calling and performing other applications for officers in the field.

According to Binks, the police department has spent just more than $8,000 for the unused subscription, not that much, he says, in the scheme of things.

However, those recurring costs at agencies across America are increasingly key to Axon’s growth. The company now claims to have some form of customer relationship with 17,000 of the roughly 18,000 law enforcement agencies in the U.S., and it’s actively working to grow its international customer base, making it one of the most ubiquitous providers of police technology. According to the company’s most recent filings with the Securities and Exchange Commission, the worth of contracts with recurring payments for Evidence.com-related products has nearly tripled in the last two years, from just over $56 million at the end of 2016 to almost $160 million at the end of last year. 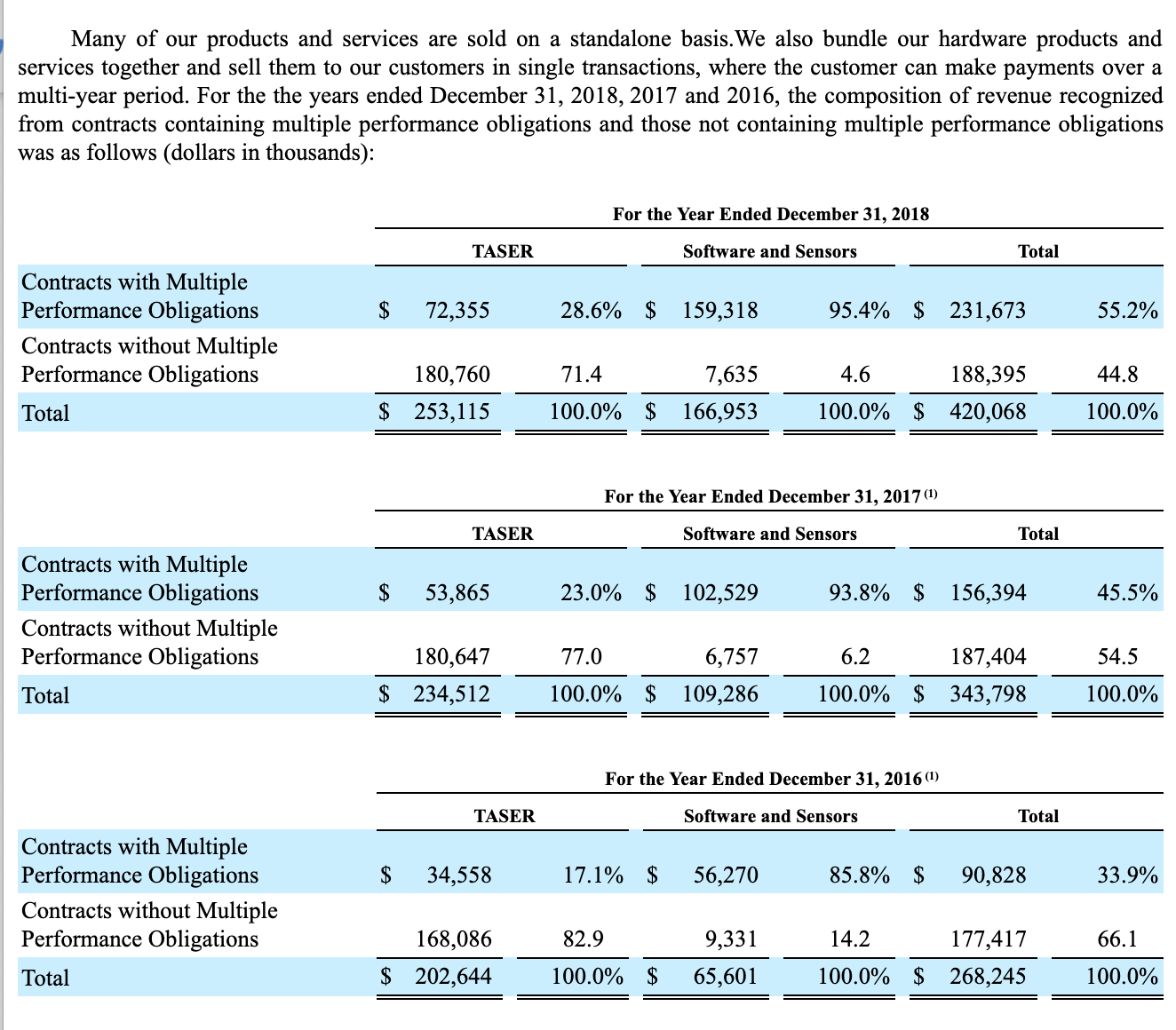 When reached for comment on the Axon representative’s direction, an Axon spokesperson told MuckRock, “It is Axon’s policy not to discuss the details of customer contract negotiations. We respect the confidentiality of those contract terms and discussions and defer to the agency as to what they choose to disclose.”

Image via City of Fontana

Beryl Lipton sent this request to the Fontana Police Department of Fontana, CA