Crafting an appeal can be daunting, but the results are worth it. Here’s some quick tips on what you can do to get an agency to reconsider your fee category, which can result in drastically reduced costs.

When it comes to appealing fees, you are most likely appealing an agency’s rejection to your fee waiver request, a high fee estimate, or proving your media status to the agency. The appeal serves as a friendly reminder of the law and the misuse of it. The way you format your appeal is up to you, but appeals can range from lengthy letters to mere sentences like this one:

Agencies have to acknowledge every appeal that is sent to them. Of course, the clearer you are in expressing your reason for appealing their decision, the better it’ll be to prove your case and overturn an agencies decision. FOIA statute classifies requesters into three categories: commercial requester, educational, scientific or news media requesters, and everyone else. Generally, commercial requesters are charged the most, while educational, scientific and news media representatives are charged the least, if at all. More often than not, requesters who are clearly members of the press have to prove their stance to agencies.

So, what can you do if an agency rejects your fee waiver request as a media requester? As previously mentioned, you have to prove yourself! This could mean sharing your most recent works or giving an explanation of how the requested documents will compliment your future projects. MuckRock user R.M Seibert proved her media status by sharing her most recent works and also clarifying her research to the agency. 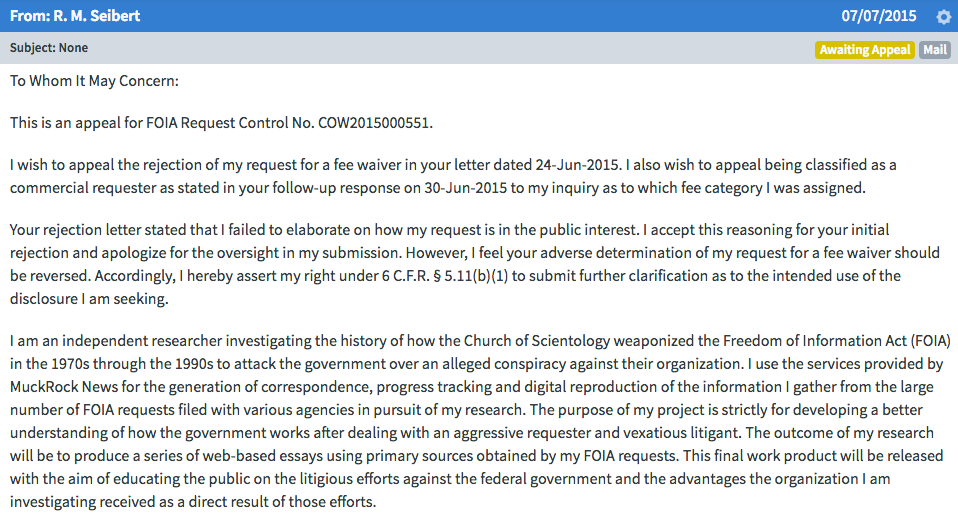 The user clearly explained his intent in obtaining the records and asked to appeal his status as a commercial requester. After much haggle and convincing, his appeal was successful and the documents were released to the user, free of charge.

Generally, fees should be reduced or waived entirely in cases where the disclosure is “in the public interest because it is likely to contribute significantly to public understanding of the operations or activities of the government.” That means if you do prove you’re a member of the media, you might still have to prove the documents being released will have a significant contribution to public understanding. In this case, the National Park Service did not grant MuckRock user Donald Triplett III a fee waiver because the agency deemed too much enough information was already out there.

The user tried to justify the public’s interest in releasing the requested documents, but the agency is still requesting funds to release the records. Here’s Triplett’s justification:

Crafting the appeal language is half the battle when you’re trying to override an agency’s decision. If your appeal deals with issues other than fees such as what documents the agency deems public or not, then you’ll have to do a little more digging in terms of what items are exempt per federal or state law.

As you begin to tackle the appeals process, keep in mind that some agency’s may have a set timeline as to when they can accept your appeal. Some agencies may not consider your appeal if you miss their deadline, which can vary depending on the jurisdiction. If you’re a MuckRock user trying to appeal a decision, you can easily craft your language by using our appeal tool, which pulls exemption language from our exemption database. You can also take a look at other requesters who have successfully appealed decisions and draw your appeal from their winning language.