A release of over 400 pages of documents on the Federal Bureau of Investigation’s drone program not only provides a glimpse into the Bureau’s program, they show that the statistics the FBI cited to at least three members of Congress and to an Inspector General inquiry conflict with some of the Bureau’s internal numbers.

Although an email provides an explanation for one discrepancy and another explanation can be inferred for a different discrepancy, no version of these explanations can properly explain all of the contradictions and inconsistencies.

The first document, appears to have been both produced and declassified in 2013, cites ten cases in which UAVs were used, for a total of 34 deployments. According to the report, eight of the investigations and 14 of the deployments were for criminal cases, with two national security cases and 20 deployments accounting for the remaining number. The document also notes that three criminal cases “authorized and deployed” UAVs for use, but they were “never flown.”

The second document, declassified the day after the first, is an email that was originally classified SECRET and sent by the Bureau’s chief for the Technical Surveillance Section on June 20th, 2013.

The email included several attachments of differing classification levels, one of which contained responses to a then on-going IG inquiry into the drone program. According to the email, the Bureau then had 31 UAVs in its fleet, which had been deployed on “32 missions in support of 15 separate cases” - two fewer deployments and either two or five, depending on whether this count included cases where the UAV was deployed but not flown, additional cases than in the first document. 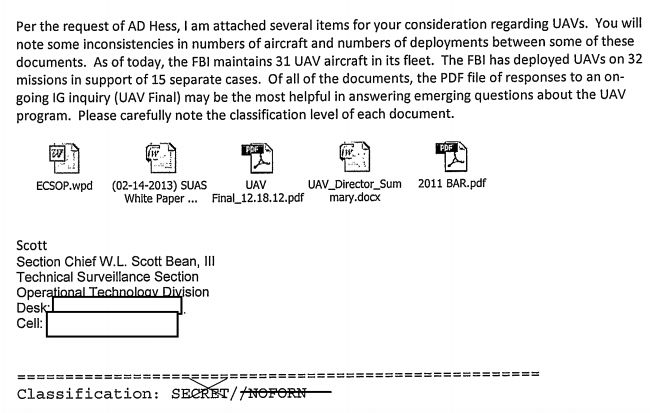 On July 5th, the same Section Chief sent a classified email stating that they had “consistently stated 34 deployments in 13 cases.” Despite claiming consistency, this was two more deployments and two fewer cases than in the second document (which he had authored), though it was arguably consistent with the first. The email noted that the numbers didn’t add up properly, and their table showed an extra deployment, for a total of 35.

Five minutes later, they sent another email explaining the discrepancy as being the result of a copy and paste error.

Exactly two weeks later, the Assistant Director for the Bureau’s Office of Congressional Affairs sent a pair of letters to Senator Rand Paul, Congressman Ted Poe and Congresswoman Zoe Lofgren. The letter stated that the Bureau had used UAVs in ten cases, and deployed but not flown them in another three. These figures with repeated in another letter to Senator Paul written eleven days later. 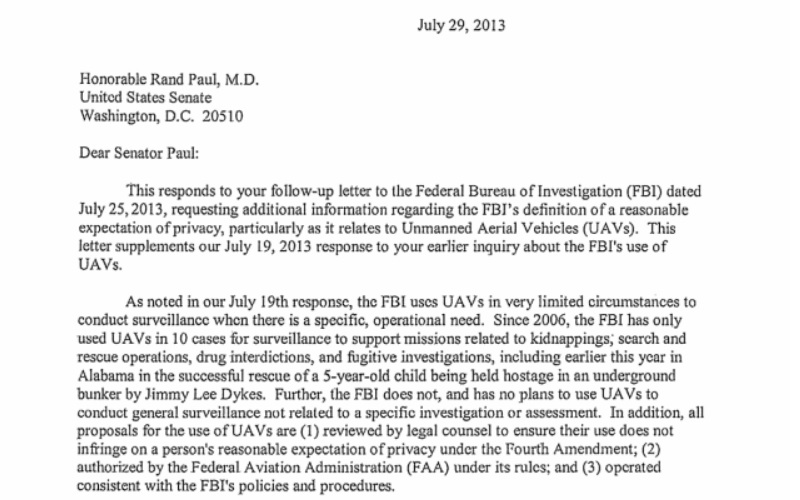 The March 2015 Inspector General report cited the number of cases as thirteen in August 2014, thirteen months after the letters to Congress, but didn’t provide a number of deployments. It did report that the Bureau’s fleet had increased by nearly ten percent, to 34 UAVs. The report makes no caveat about UAVs being approved and deployed but not flown in three cases. The report simply ambiguously describes the cases as UAV “supported investigations.” Its numbers are consistent with some of the Bureau’s previous numbers if they purchased an additional three UAVs in thirteen months while simultaneously not using any of them for any new cases. 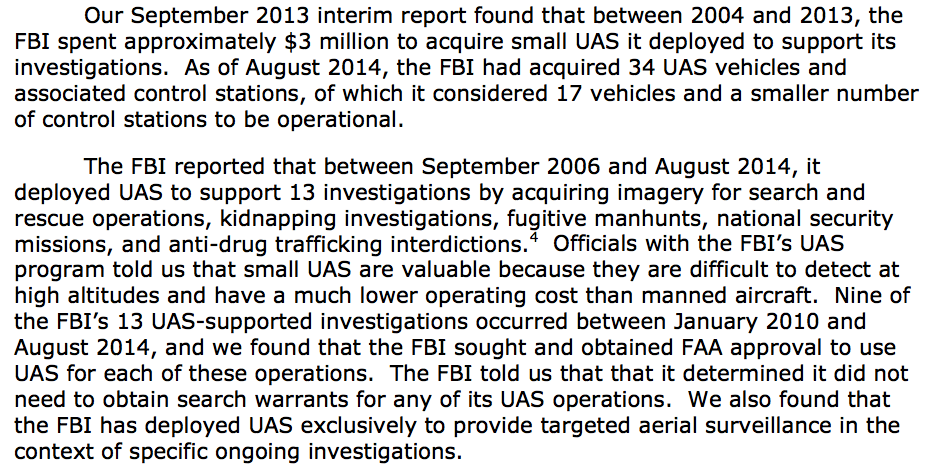 Though consistent with the rest of the Bureau’s reporting, these numbers contradict what the Section Chief stated in an email that discussed the response to the inquiry.

A number of additional FOIA requests have been filed to learn more about the discrepancies in different documents and whether there were 10, 13 or 15 investigations that used UAVs and why they claim to have stopped using them in new cases for over a year. In the meantime, you can read the full release embedded below (thanks to Tim Cushing for putting this together) or visit MuckRock’s 2013-2014 Drone Census project.

Image by Alan Levine via Wikimedia Commons and is licensed under CC BY 2.0

Emma North-Best sent this request to the Department of Justice, Office of the Inspector General of the United States of America