In August 1943, Lane had written about her run-in with the FBI in a pamphlet entitled “What is this - The Gestapo?” which prompted Baldwin to formally inquire about the incident with Hoover, in particular the Bureau’s seeming inability to admit fault. 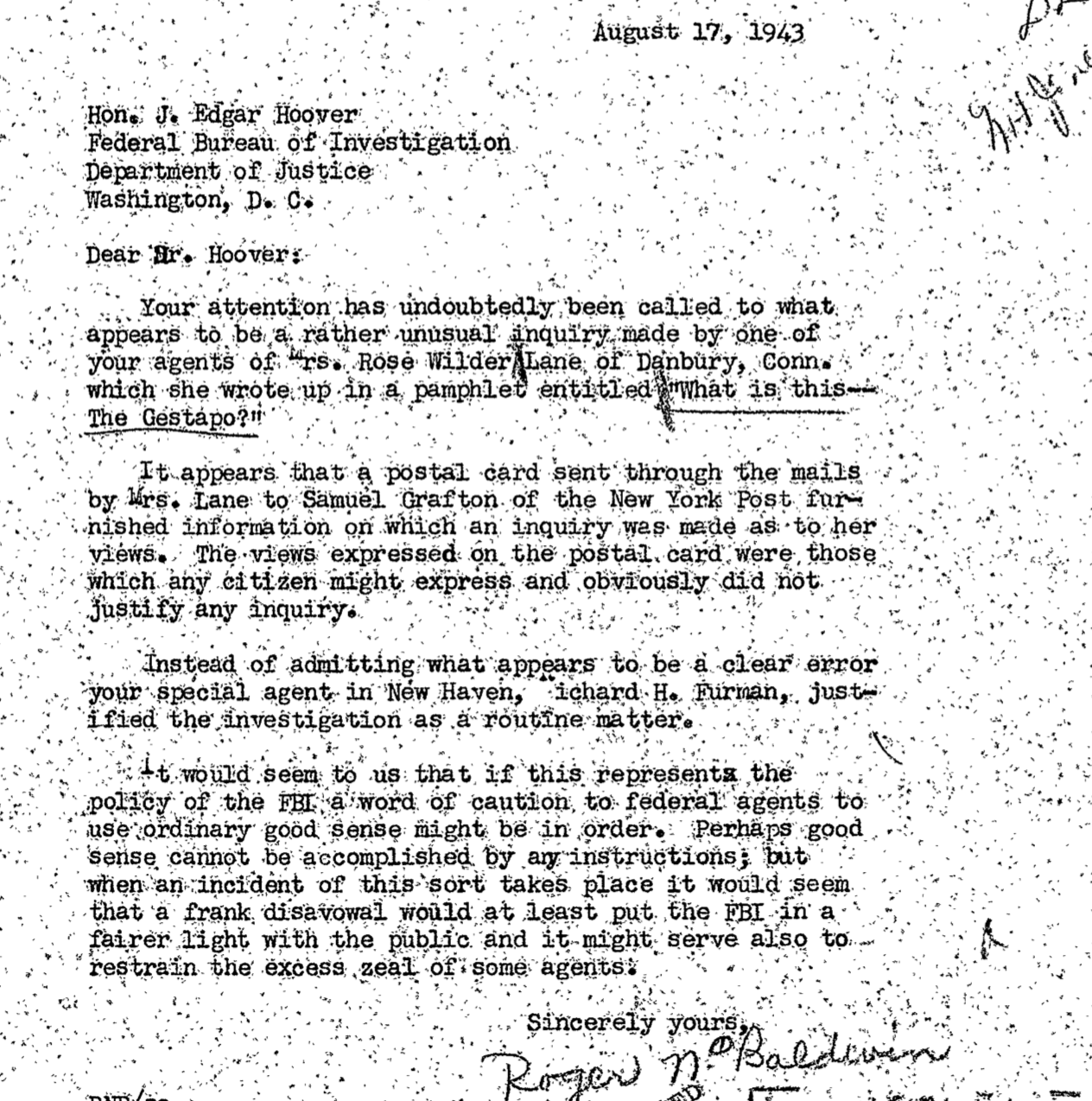 Two days later, Hoover responded with “the facts of the case,” explaining that while Lane had indeed made derogatory comments about social security in the postcard, that was not what ultimately led to the FBI getting involved. Unfortunately, the anonymous “patriotic citizen” who had altered the local FBI Field Office of the potentially subversive material has misspelled Lane’s last name as ‘Lang,’ and when nobody by that name came up in the Bureau’s records, the Field Office sent a Connecticut state trooper to confirm who lived at the address. 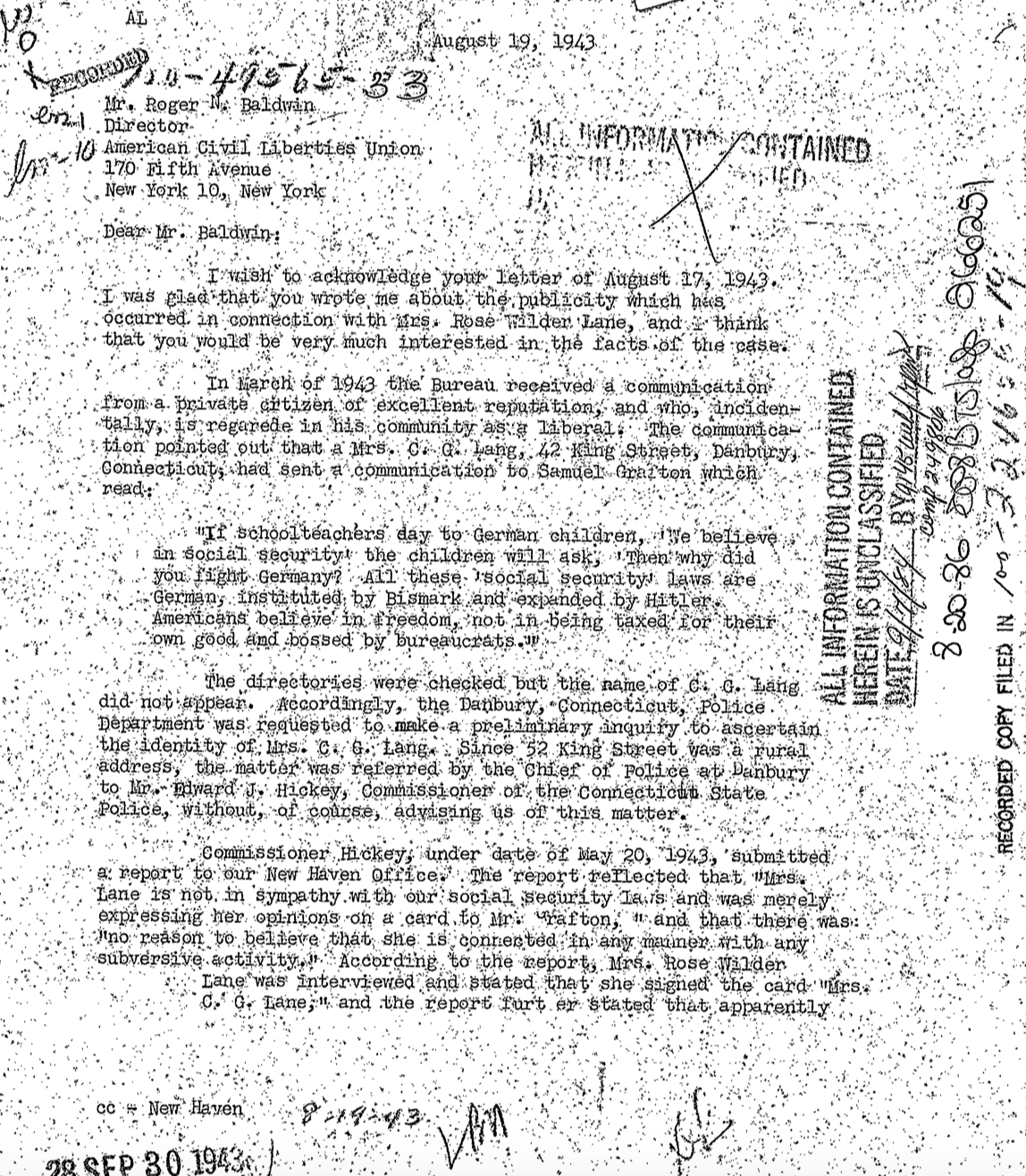 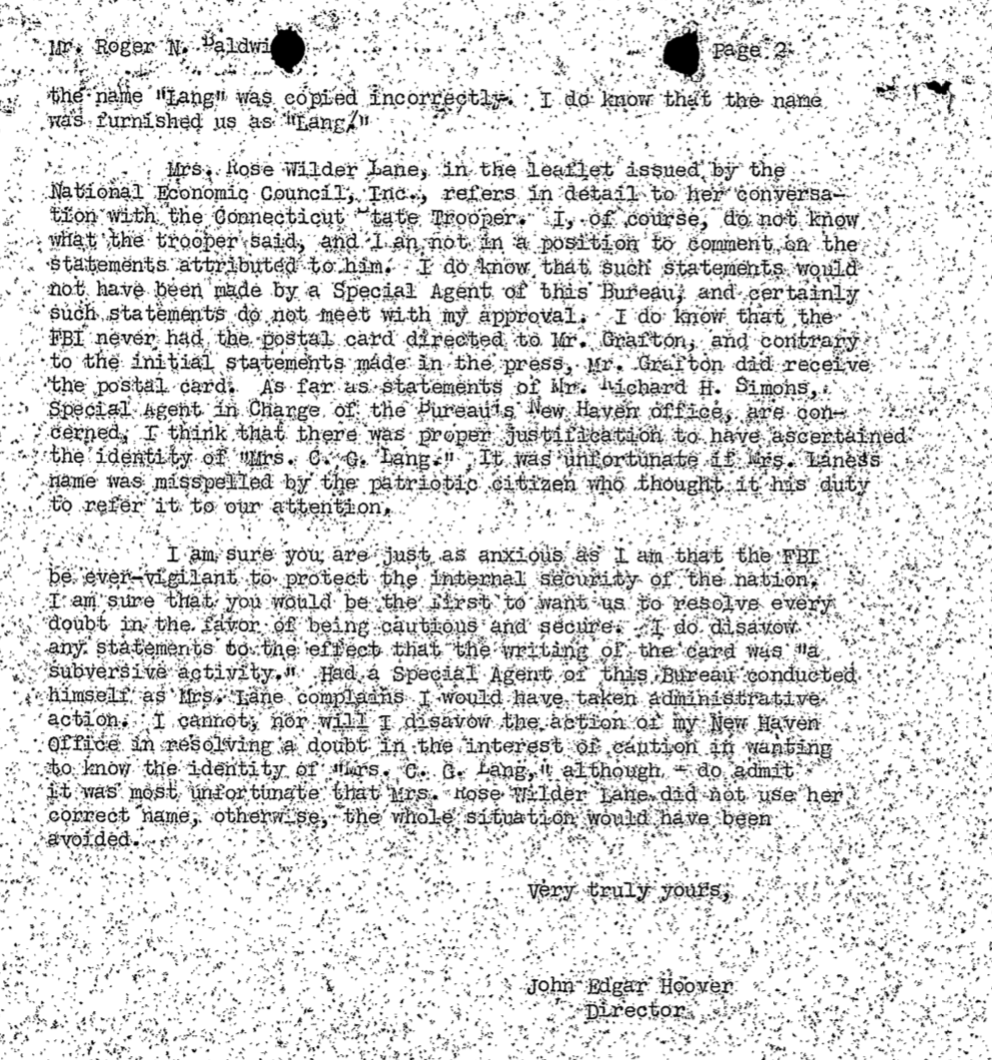 While Hoover didn’t approve of the comments Lane alleged the trooper had made during the interview, he maintained that the Bureau had acted within their due diligence to confirm Lane’s identity.

A little over a week later, Baldwin wrote back to thank Hoover for the response, and restated what he had apparently told Hoover before in person - that wherever possible, the Bureau should make these inquiries without involving local police. 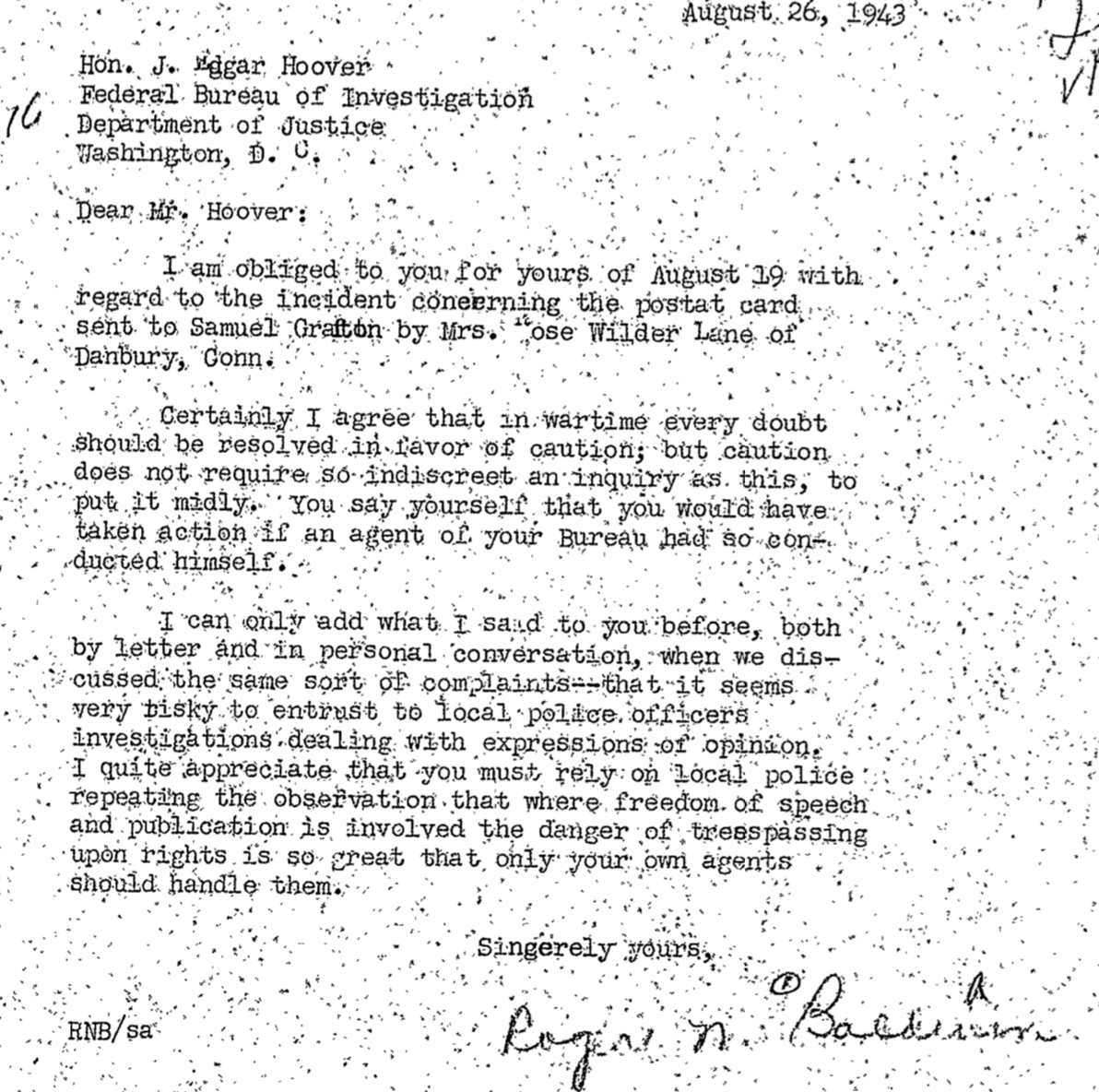 Before Hoover had time to respond, Baldwin sent an additional letter informing Hoover that he had been in correspondence with Lane. While Lane had reassured Baldwin that she had the utmost respect for the Bureau, she wanted to make it clear that it was the very routine nature of her case that had caused her so much concern. While Hoover was doing a splendid job of running his “secret police” in as much of an accord with American principals of freedom and security as possible, the same couldn’t said of the rest of the surveillance state. 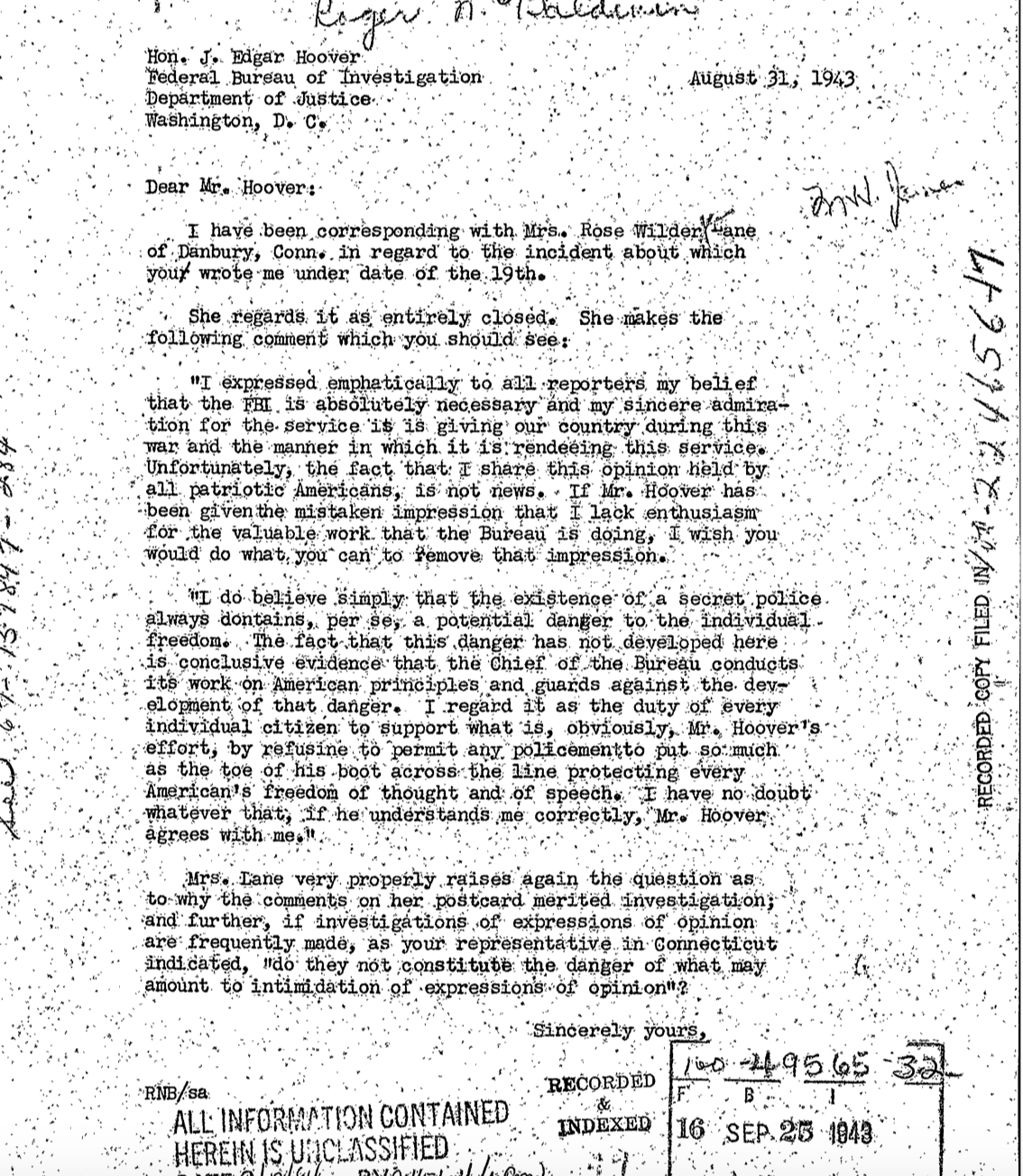 Hoover, seemingly annoyed with the whole thing, reiterated that her statements to the media were very different than the sentiments expressed in this letter, but did ultimately admit the whole matter was mishandled … 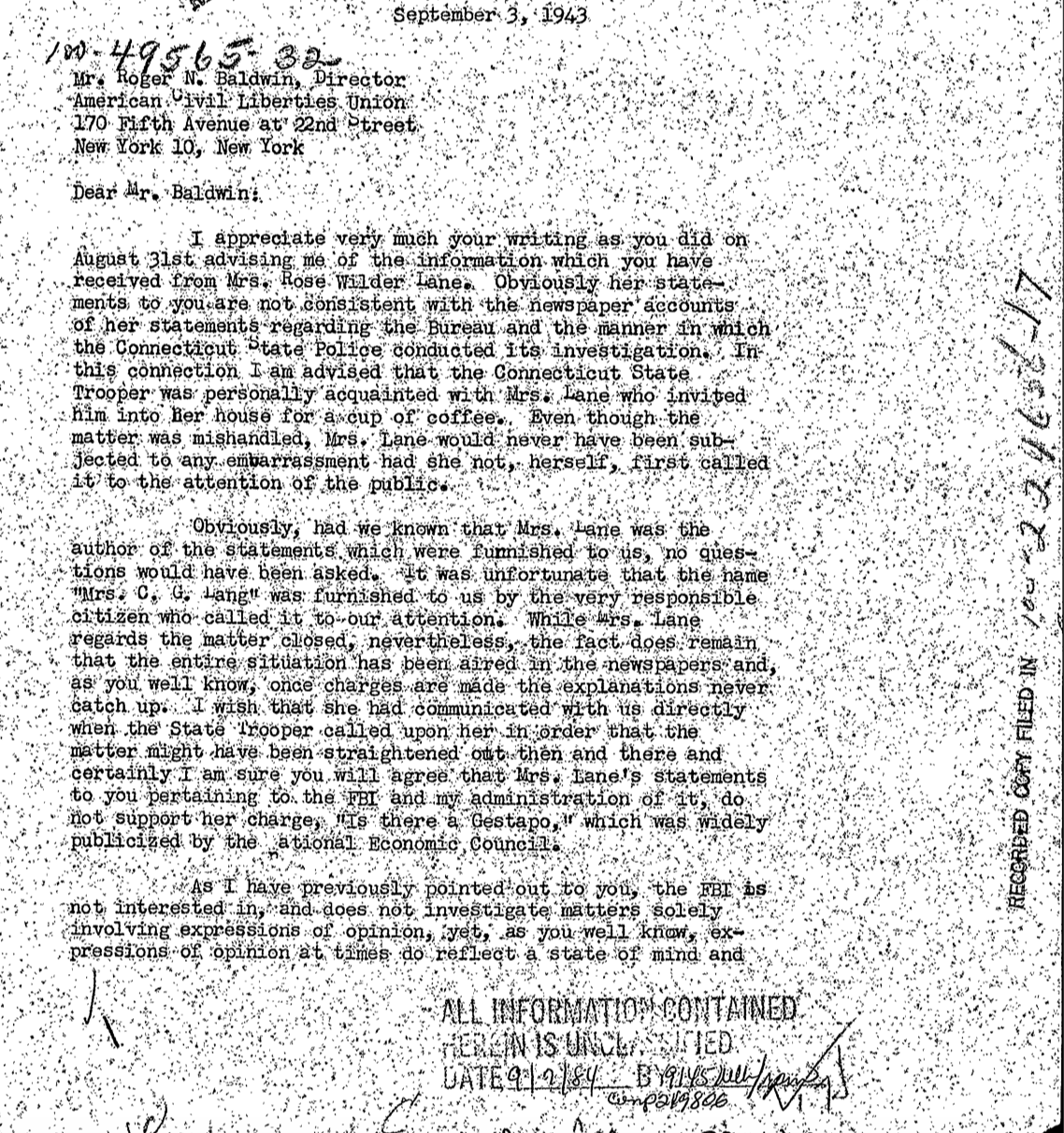 while not backing down from the FBI’s duty to defend liberty by violating the liberty of the enemies of liberty. 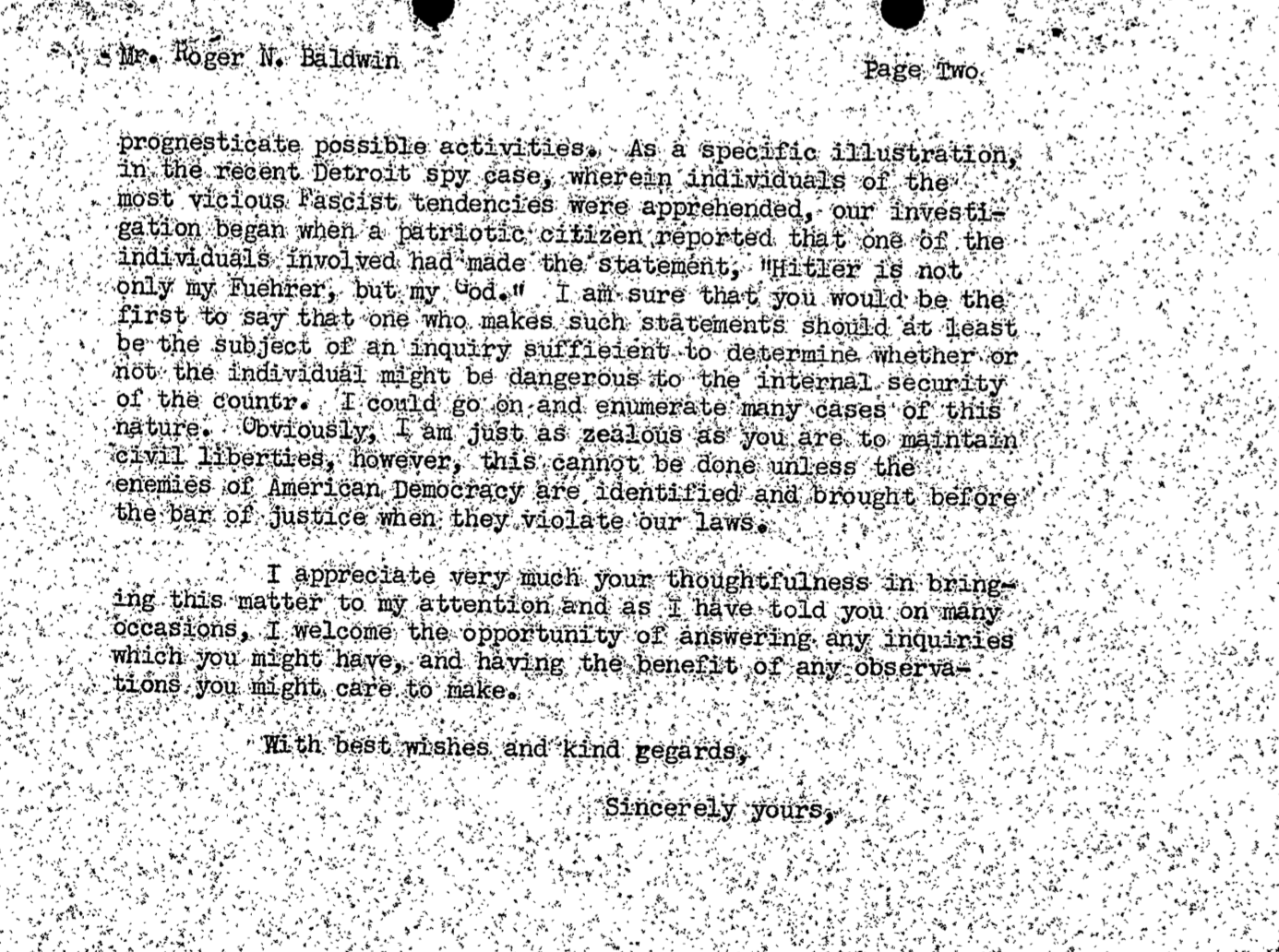 And yes, reading the occasional postcard.

Read the full exchange embedded below, or on the request page. You can also contribute to Paul Galante’s crowdfunding effort to release the FBI’s files on “Postal Censorship” here.