When the Federal Bureau of Investigation’s FOIA office in the Records Management Division prepares to release a file that it deems significant, newsworthy or controversial, it issues what’s known as a High Visibility Memoranda. These memos, circulated to different parts of the Bureau and often to the Director’s Office as well as outside agencies, outline the proposed releases and their possible fallout. A recent release of over 500 pages of these memos serves as a list of files for FOIA requesters to file new requests for so the files can be published online, as well as showing government reactions to the requests themselves.

Although often short, the memos are likely to be exceptionally useful to FOIA requesters. The memos typically include an explanation of why the request is important, or the most significant disclosures within them. One of the earliest memos released, discussing records on the Anti-Defamation League of B’nai B’rith, explains that the file revealed “the extent of the liaison between the FBI and the ADL.” 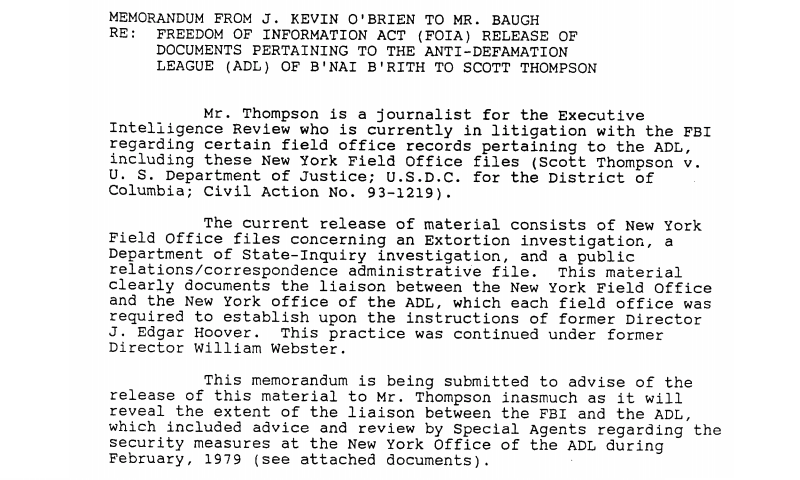 In some instances, the memos provide page counts for both released and withheld documents, and briefly describes the types of exemptions that are being invoked to withhold information.

Far more significantly, other memos highlight attempts to handle FOIA requests improperly. In one particularly notable instance, regarding the death of Vince Foster, the Secret Service asked the FBI to withhold a document in violation of the law. According to the USSS, the document contained “inaccurate” information, and thus shouldn’t be released because their employee “denied making the statements.” USSS “suggested” that the FBI deny the information to protect the privacy of the employee in question, and “to the information provided in confidence.” The memo doesn’t explain how the USSS felt that the statements hadn’t been made and had simultaneously been made in confidence. The FBI withheld only the name of the employee in question.

In some instances, like a FOIA request for files on James Jesus Angleton, reveals that the matter was considered so sensitive that a special Central Intelligence Agency task force was created to work with the FBI to review and redact the file.

In a few instances, the memos highlight files as containing information that was “most embarrassing” to the FBI and other government agencies.

One of the memos, in this case an email classified as a High Visibility Summary, highlights the limits of both the FBI’s ability to investigate matters and their ability to process FOIA requests. In response to a MuckRock request filed by Shawn Musgrave, an email was sent that described MuckRock (the Bureau got the camelcase wrong) as “an internet site that is part of the Freedom of the Press Foundation.”

Despite being fans of their work, MuckRock is not and never has been a part of the Freedom of the Press Foundation. (The Bureau may have meant to refer to MuckRock having received a grant from the Foundation in 2012.) 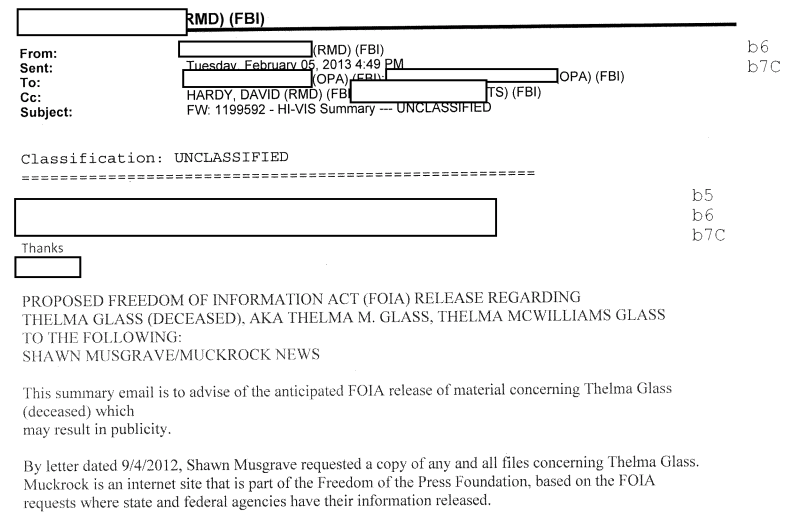 Overall, the memos detail hundreds of FOIA requests that are of significant interest to the public. While all of these files have been released, many are worth requesting again as they aren’t available online. As many FOIA requesters know, requesting preprocessed files is an excellent way to reduce or avoid search and duplication fees. In some instances, files can be re-reviewed and re-released with fewer redactions. Readers are encouraged to use the memos as inspiration for their FOIA requests.

Read the largest selection of memos embedded below, and the two additional sections on the request page. Additional memos have also been requested.