In her first month as acting Education Secretary, Betsy Devos retracted an Obama-era guidance outlining protections for transgender students. The Trump administration critiqued the guidance as an example of federal overreach, as well as claiming the document lacked legal clarity for its real-world application.

Following the rescindment of the 2016 Dear Colleague Letter, it was unclear how the Office of Civil Rights would handle these cases moving forward. The withdrawal has again left it up to the discretion of state and local law makers to support transgender kids within their institutions - though the ORC and DeVos have assured the public that this did not signify a departure from handling discrimination complaints filed on behalf of trans students.

On June 6th, 2017 Acting Assistant Secretary for the Office of Civil Rights Candice Jackson released a statement to clarify the department’s stance on the matter. However, the letter only increases the ambiguity of their stance, as they fail to clarify arguably the most divisive topic surrounding transgender rights in the past few years - sex segregated facilities.

Some states, most notably North Carolina and Texas, have put forth bills that would restrict bathroom and locker room access by biological sex. While bills in the line of NC HB2 specifically targeted locker room access, their core function is to oppose transgender visibility and acceptance in society.

Early last year, we submitted non-discrimination policies regarding transgender students to all 50 states Department of Education as well as a few major cities across the U.S. We received 50 very different responses, varying from merely suggested policies to fully formed plans with structure and consequence.

A map of cities and states that released responsive documents is embedded below, and the rest can be accessed on the project page here. Find something that stands out in your local policies? Let us know via email, on Twitter, or on Facebook.

Image by Lorie Shaull and is licensed under CC BY-SA 2.0 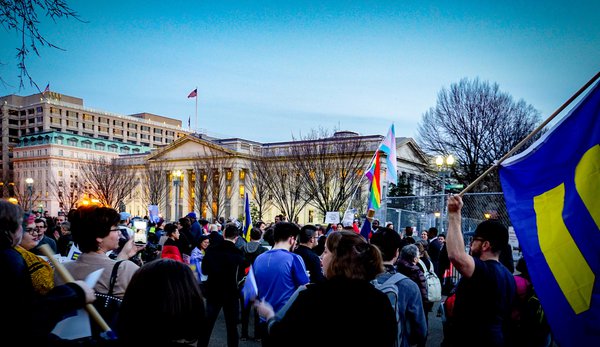