In 1951, the newly-created Central Intelligence Agency produced a wilderness training guide, “Introduction to Survival.” It starts off scary and weirdly nihilistic, then gets down to the nitty-gritty of how to jump out of a plane, not drive everyone crazy, and more.

Below, eight survival tips from the CIA.

1. Don’t get on everyone’s nerves

“Old timers expect such difficulties and have learned to accept hardships with patience and to be behave in such a manner that they do not irritate their companions. Young men who have spent their lives in civilization, rarely understand the importance of the effect of their actions or behavior on the group, and, for this reason, are the worst offenders,” says the guide. The top six reasons you might invoke your companions’ “mental disturbance?” 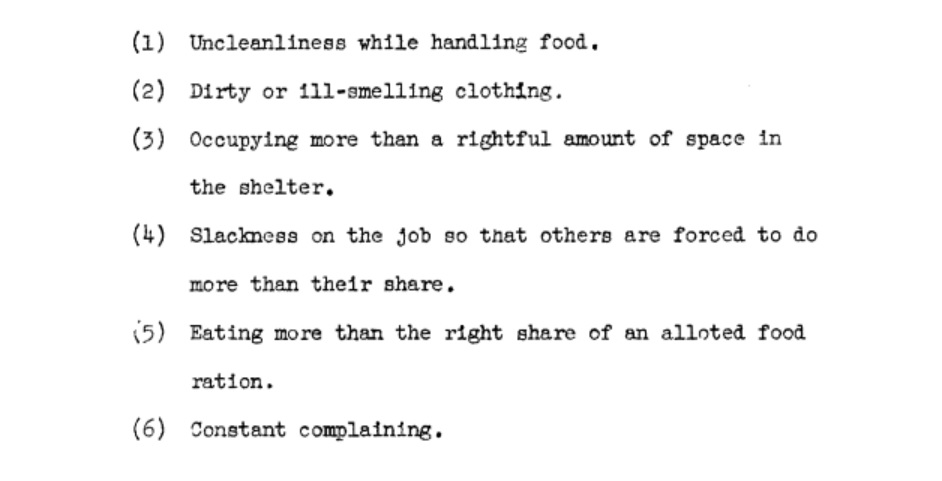 They’re stress-relieving, and you’re less likely to freeze to death if you’re clean.

Forget the earlier part about the “wastes of the world.”

4. There’s always going to be one jerk, just ignore him?

The guide doesn’t actually advise the trainees on what to do with this “individual,” it just says that he will definitely be there, and that the wisest course of action is to single out whoever does seem most capable of surviving in the wild, and then “back up their decisions with loyalty and the courage of your convictions.”

The guide also contains an extensive section on general hygiene, detailing how to wash oneself with a sock, treat an ingrown toenail, and keep the campsite tidy. “A littered and dirty campsite indicates a lack of discipline, low morale, and that tenants are in a low state or mind,” says the guide.

7. Don’t forget to enjoy the beauty nature has to offer while you’re fighting for your life in the middle of nowhere

8. Relish in your victories

Read the whole training guide embedded below for more words of inspiration and also diagrams of how to butcher animals.