459 pages of complaints from the Nevada Division of Insurance (NDOI) related to bail bondsman point to epidemic in the state: bounty hunters in a largely unregulated industry are routinely using that vacuum to line their own pockets or abuse their customers.

To drive home this point, we will showcase five egregious examples from the NDOI files.

One man put down his car as collateral for a $1,420 bond to get his brother out of jail. Shortly after, he then learned that ICE had put a detainer on his brother, and he would be deported, rendering the need for bail moot, since bail doesn’t apply in those cases. Did the bail bond company promptly release his car? 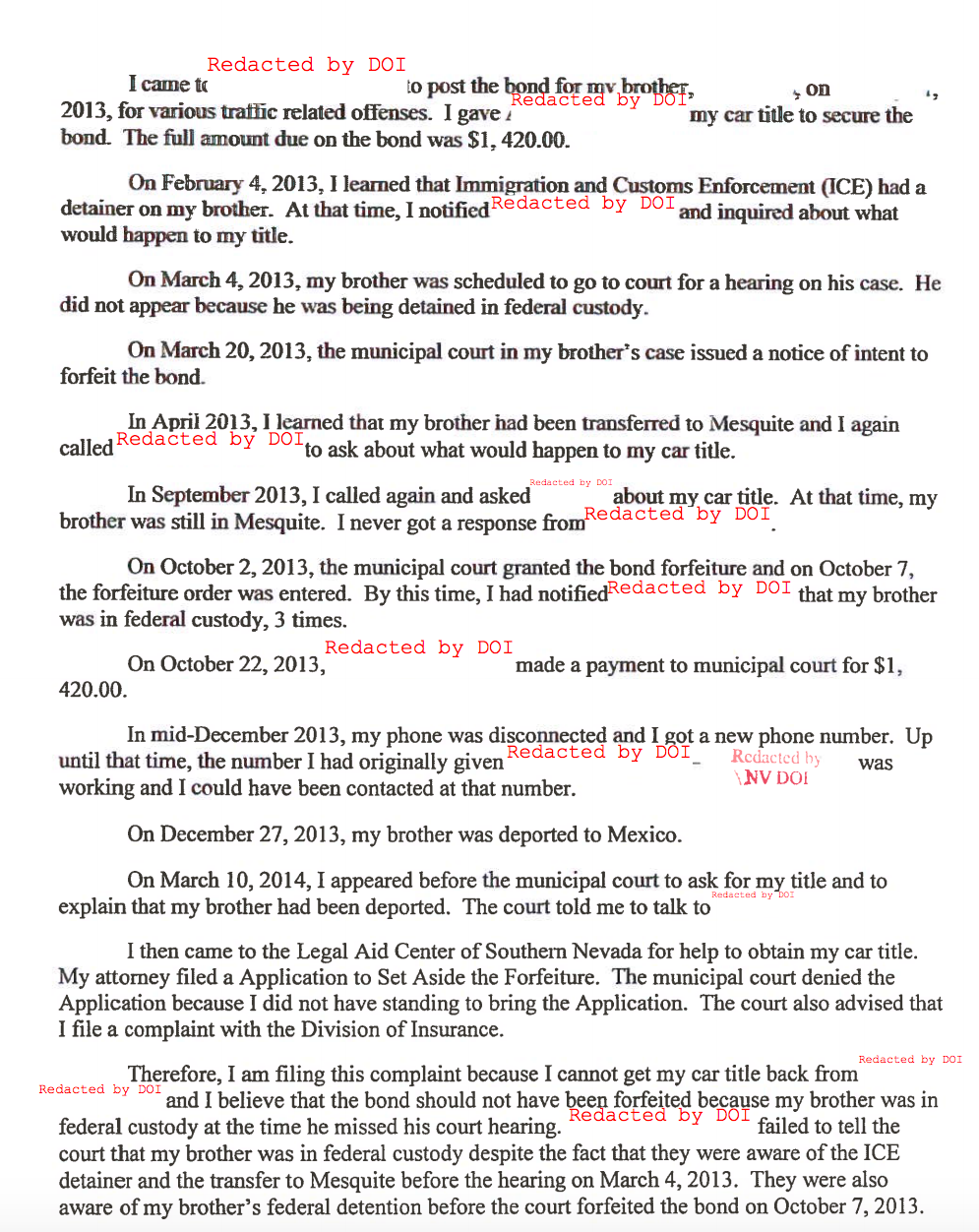 A year later, the answer was still no, even after his brother had been deported.

There are plenty of examples in the files of bail officers harassing families in attempts to locate fugitives. 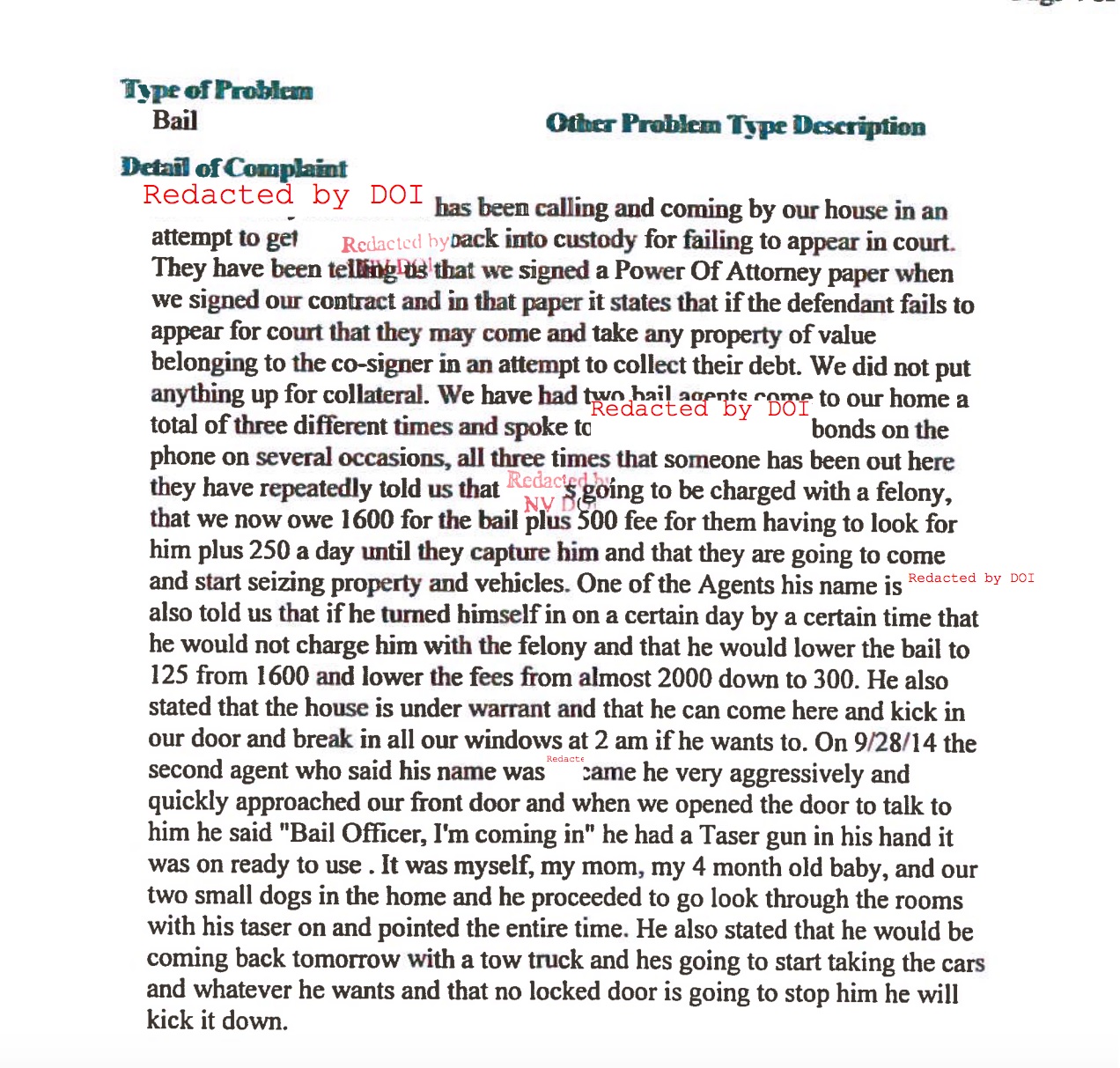 This includes entering the house with little to no warning, threatening the family with tasers, and letting them know that he, the bail officer, has the power to come and kick down the door at two in the morning to repossess cars and other property. 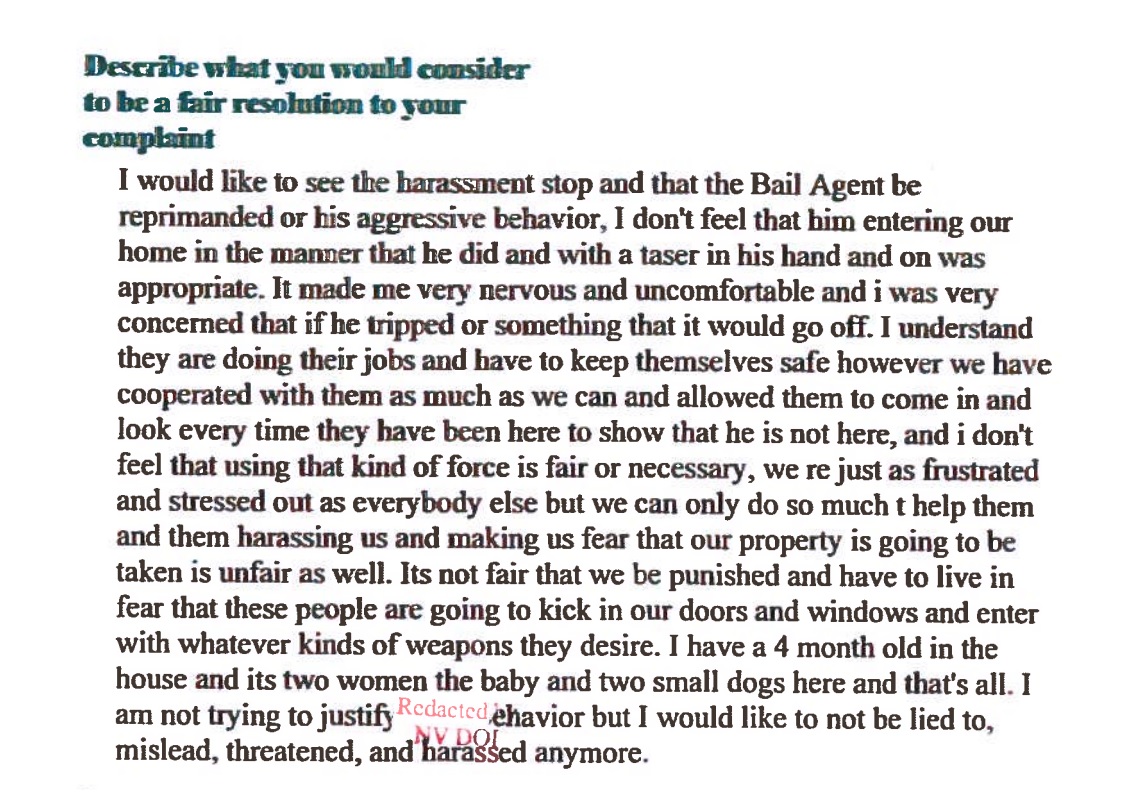 An individual had put up their car to pay off the rest of a bond - $3,600. Initially they had tried to pay off the entire bond with their Nissan Altima, which the bond company valued at $5,000 before cutting that to $4,000 due to the vehicle having a rebuilt title. The bond company then changed this further when the individual was having problems getting the rest of the money for their attorney, slashing the car’s value to now just $1,100. Panicking, the person enlisted the help of their boss to for the final $1,800 to the bond company, so they could pay off the attorney. 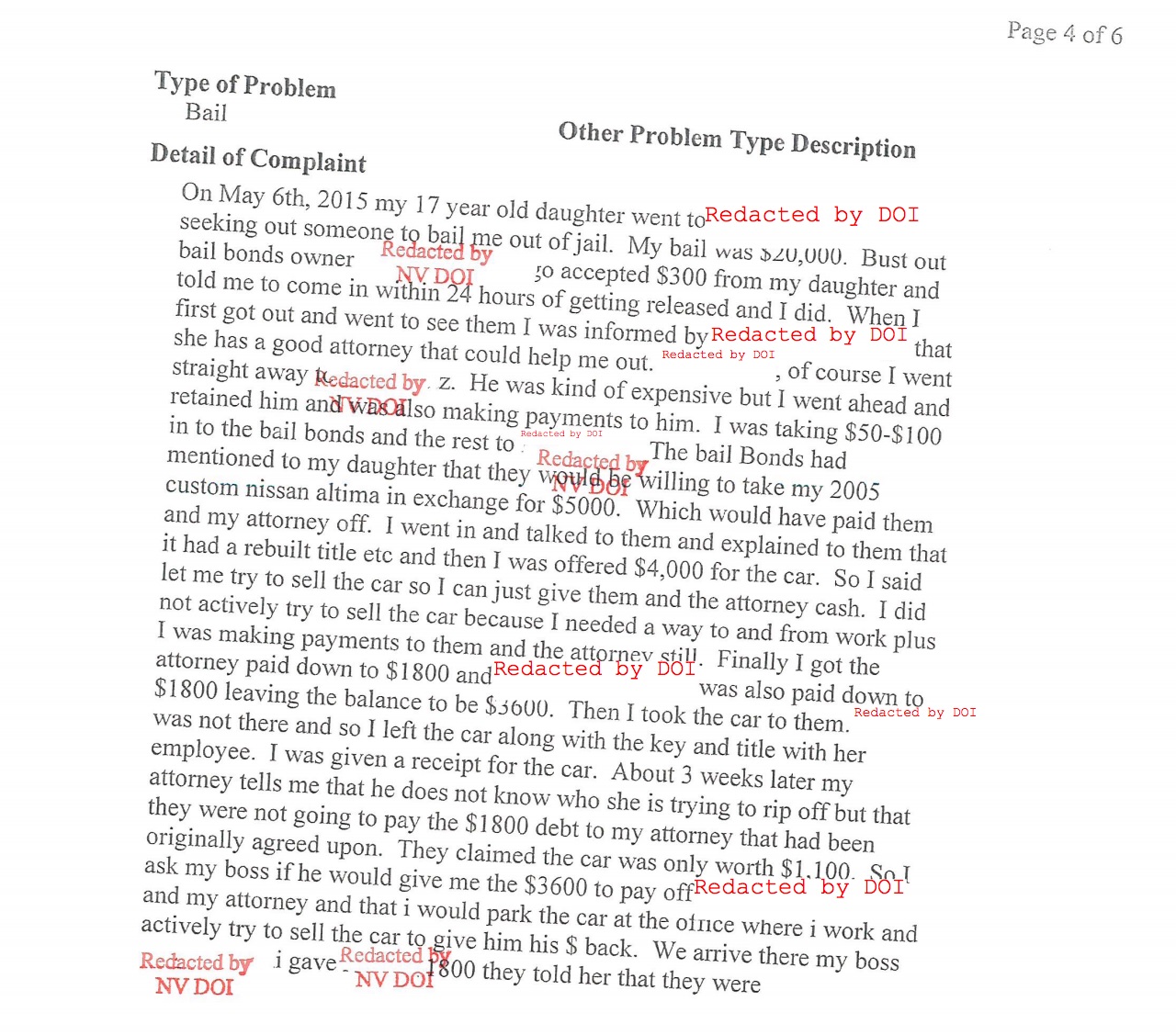 Meanwhile, the car would stay at the bond company office, and they would try to sell it. When the individual arrived at the bond company office, personnel from the bond company pushed their boss out of the office and demanded the car to wipe out the debt, or, they would keep the $1,800 the boss had just handed over to them and the individual would return to jail on a bond violation for skipping a check in - even though the company had repeatedly told them that they didn’t have to physically check in at the office. 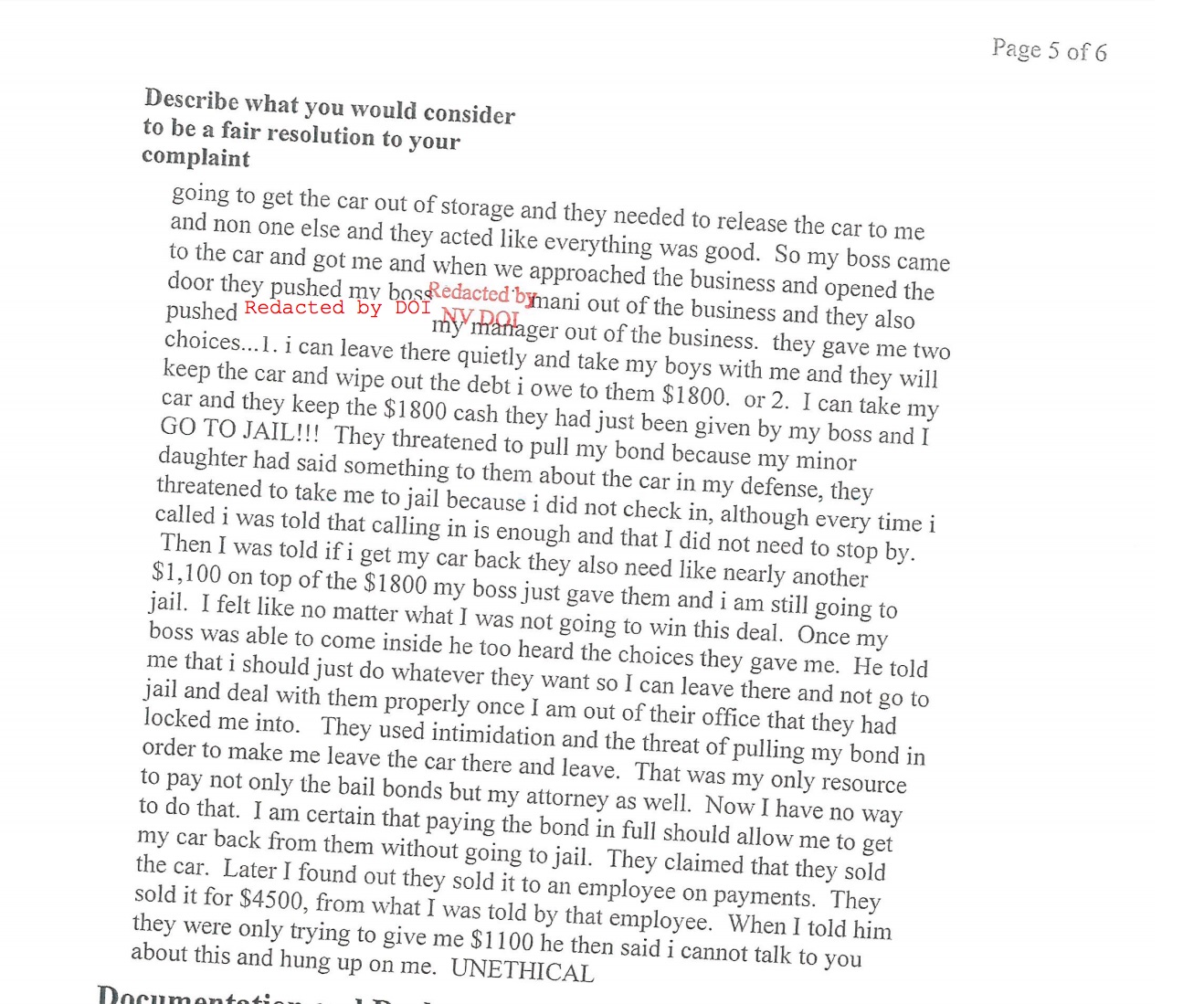 Within the files, there are even complaints dealing with bounty hunters that take money and vehicles from individuals without putting in any real work on finding the bail jumper. In one case, a man had put down his car, after which the bail bond company demanded $2,500 more, because they had to go to Las Vegas to pick up his son, the fugitive. This was in light of $3,000 already put down plus another $500 that he had put down against the advice of his friends and family. 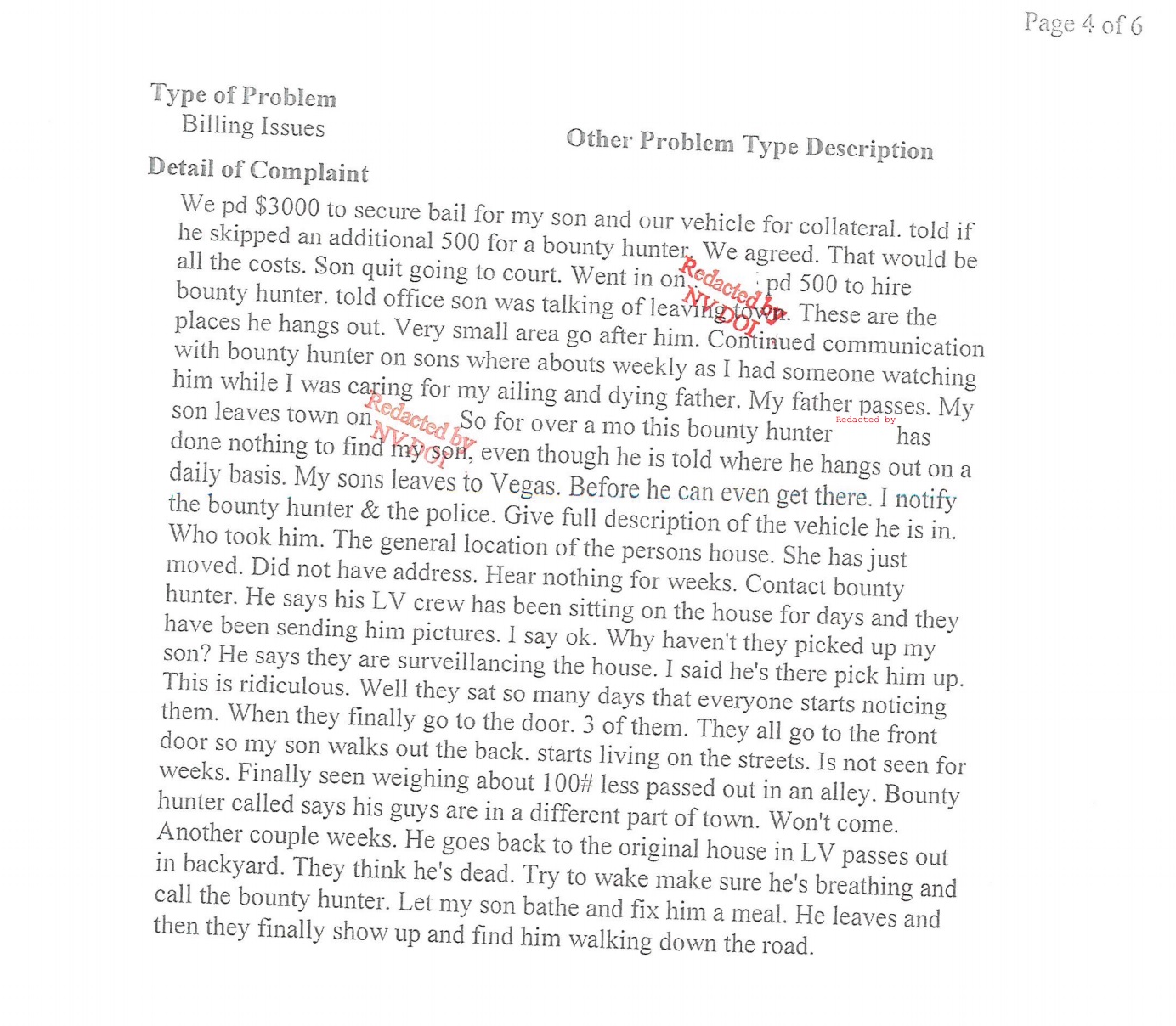 Further, he had consistently told the bail company where the son was hiding out in Reno on a daily basis for over a month. 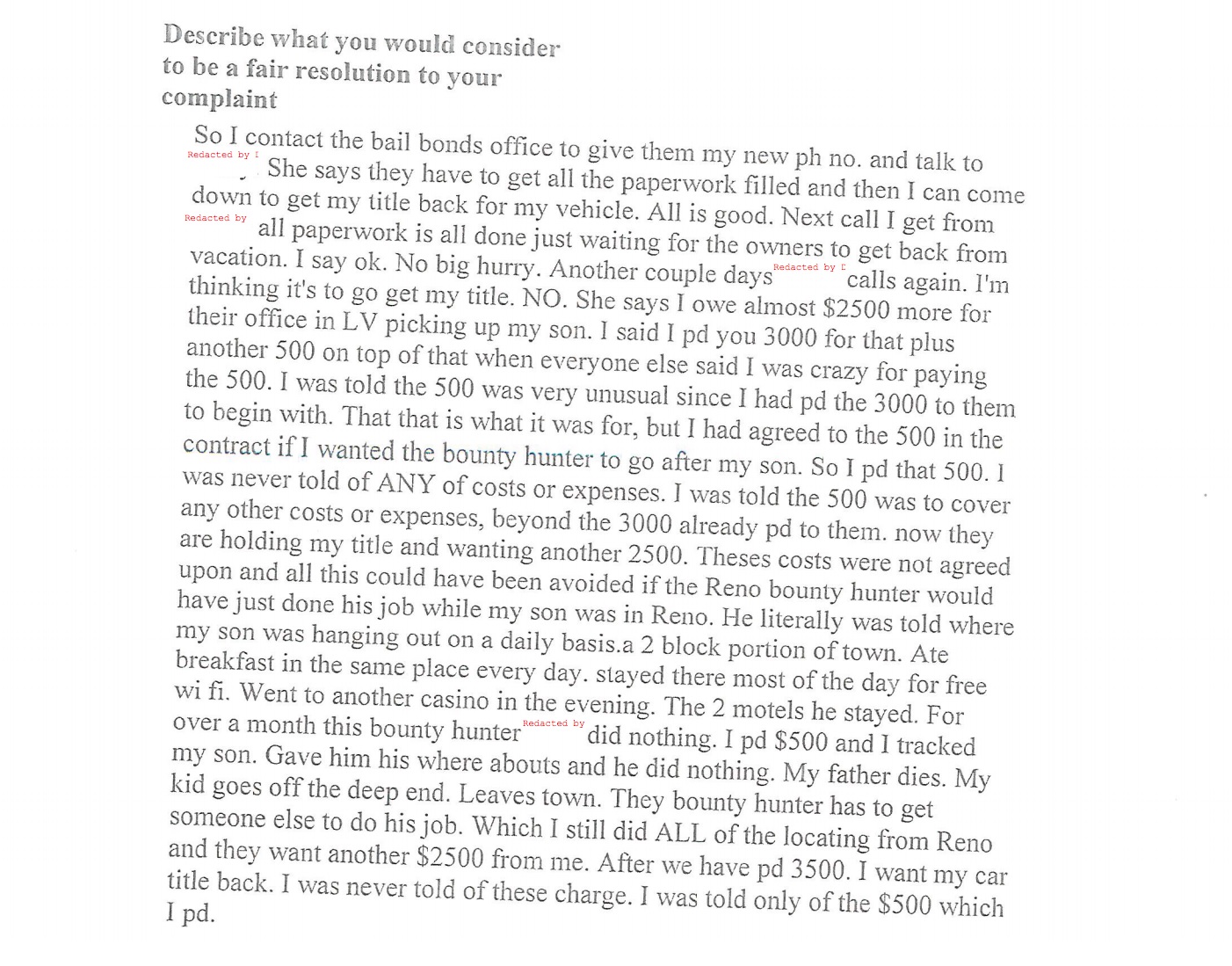 It’s hard to find a name for that other than fraud.

A tax lien lawyer investigating two liens for $20,000 and $30,000 on a home wrote to the NDOI, accusing a bail bond company of taking the liens on the house as collateral without any legitimate documentation, with the person he represented swearing up and down that they never signed the contracts for the liens on the property. This resulted in the bail bond company calling this woman a liar and refusing to relinquish the liens taken without consent, or provide copies of the original contracts that they said had been signed. 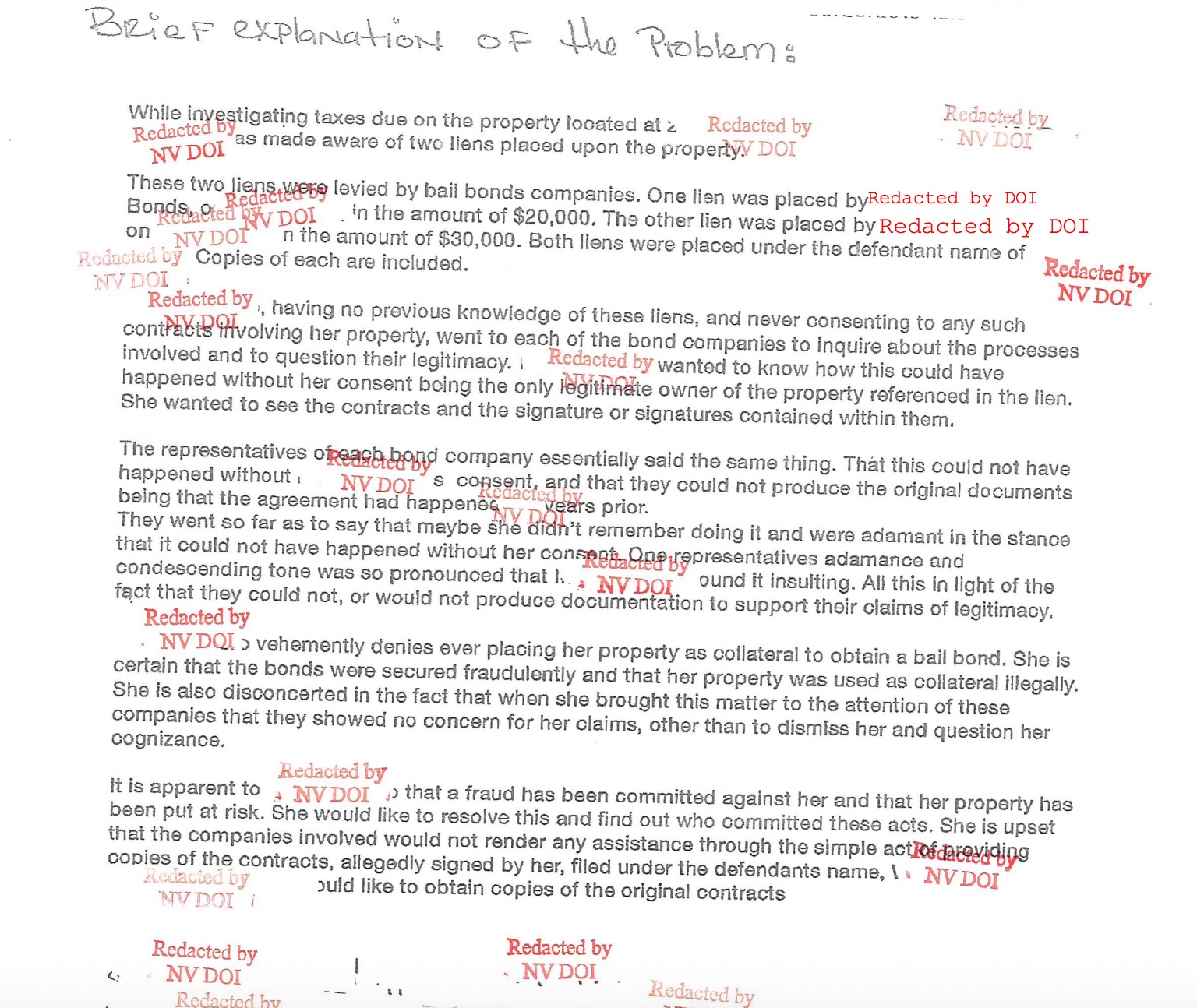 This seems to cross the border from fraudulent business activity, to outright theft.

Bonus: One bail bond company unbelievably took the wrong car. An individual had signed over their 2007 Chevy Impala as collateral. Instead, the company took the 2004 Impala, and then refused to give back the vehicle. 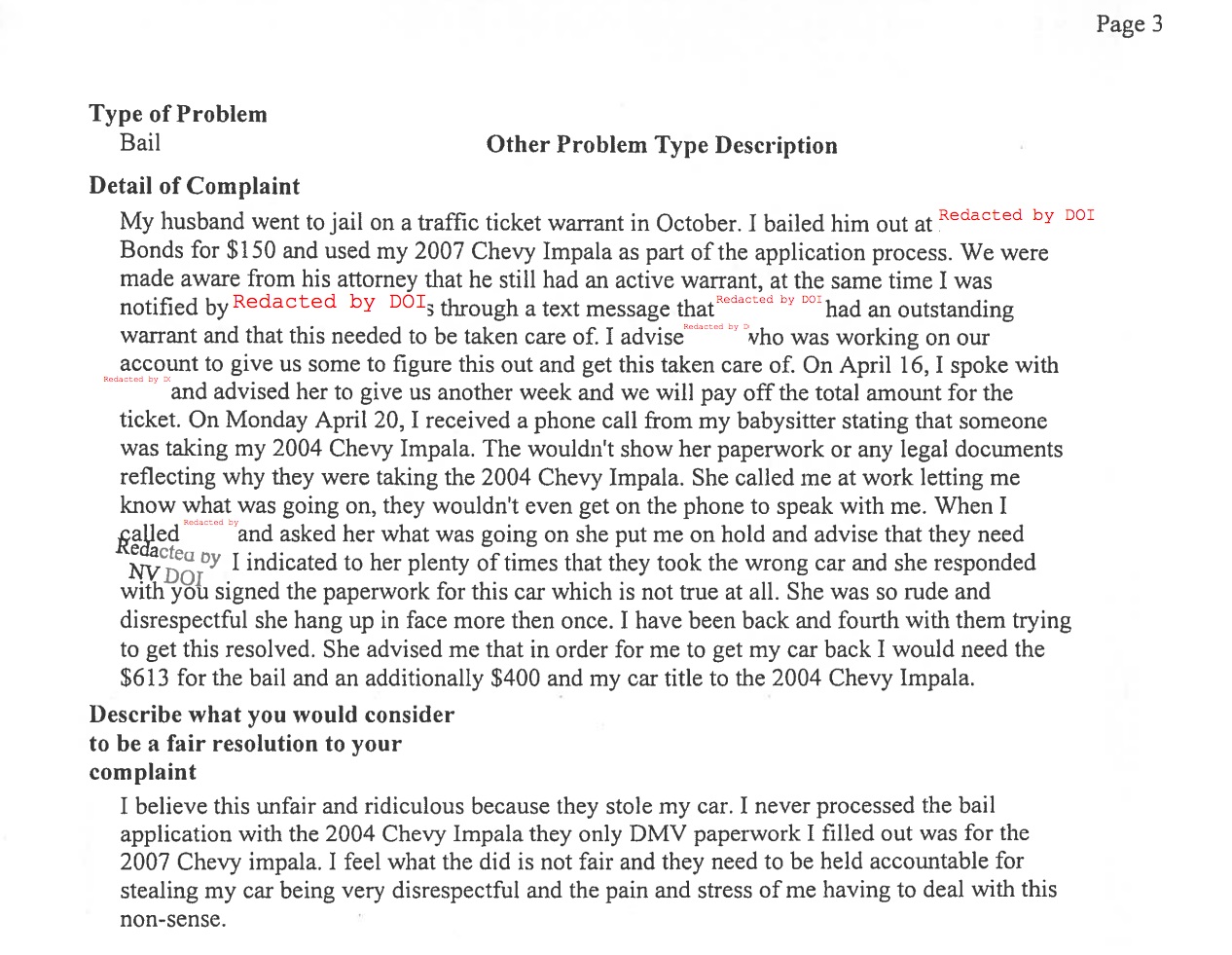 The rest of the documents are full of examples like these, with incidents bordering on theft, bail bond companies dodging requests to pay back bail bonds that have been exonerated leaving people thousands of dollars short for months or years, threatening customers, being unlicensed, and using phishing services like TLO.com, which is illegal to do as a bail bond officer, to harass friends and family to turn over money, property, or the fugitive. Read the first batch embedded below, and the rest on the request page: