In the process of continuing our investigation into the world of bail enforcement, we have uncovered the horrifying case of Curtis Maroney, a South Carolina bounty hunter who for years abused his position to extort women for manual labor and sexual favors. It’s hard to overstate how grotesque and uncompromisingly dark the story is that unfolds below, and if you have a history with sexual or domestic abuse, consider this a trigger warning. 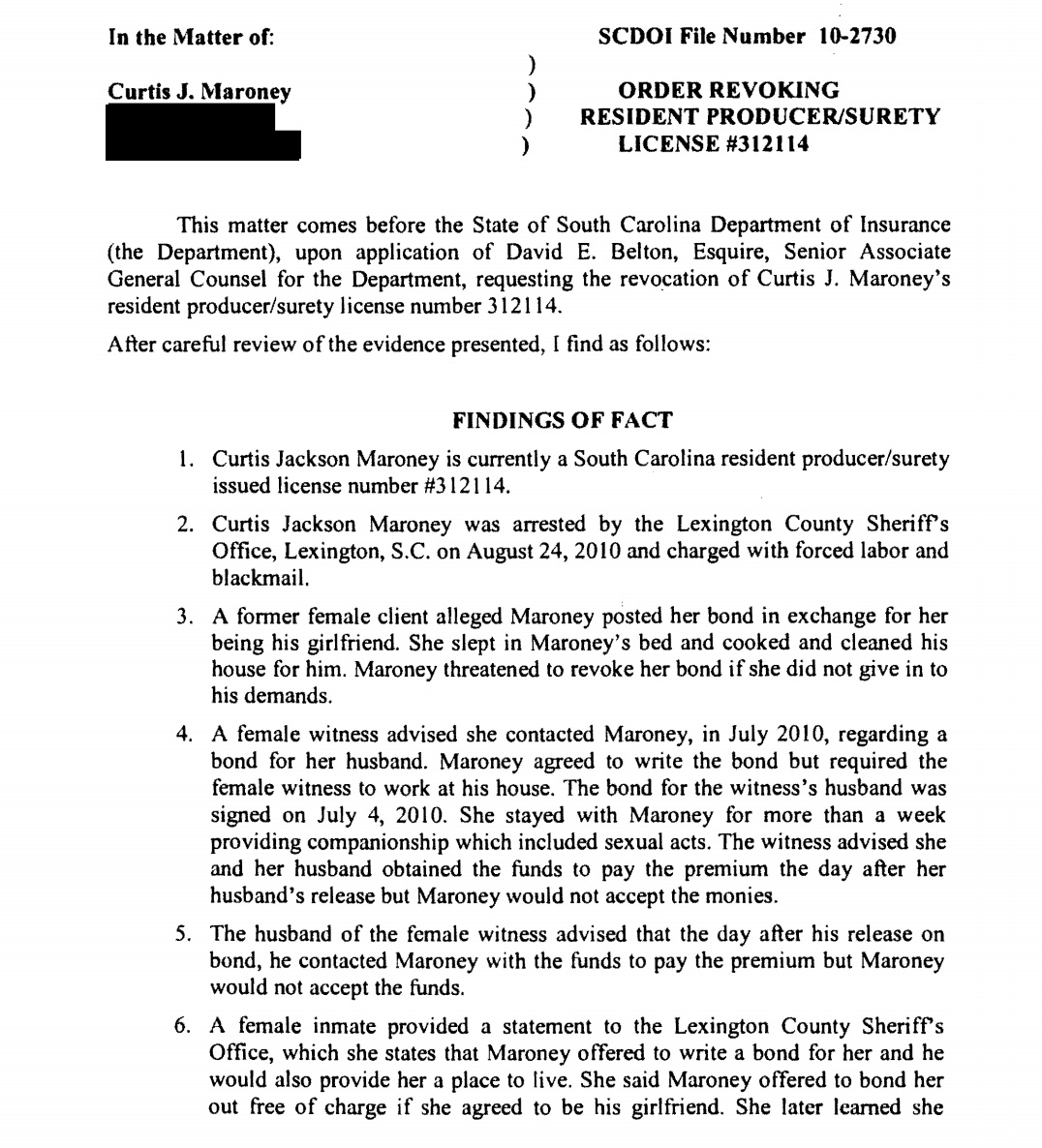 The 150 plus pages of records we received come from the South Carolina Department of Insurance. Back in 2010, they had worked a blackmail and extortion investigation with the Lexington County Sheriff’s Department (LCSD), centering on a bail enforcement agent named Curtis Jackson Maroney, 51 years of age at the time.

Deputy Nieves of the LCSD responded to a Lexington County house, in central South Carolina. Outside he talked with Maroney, who identified himself as a bail enforcement agent (i.e. bounty hunter) for DBA Affordable Bail Bonds. Maroney told Nieves he had the necessary paperwork to bring the woman in the house back to jail, to which Nieves replied by informing him that it was the woman who had called the police, and that he needed to make contact with her before anything more happened. Finding her “very frightened and shaking with fear,” the woman let Nieves know that Maroney intimidated her into staying at his home. Nieves let Maroney transport her to the Lexington County Detention Center, and once at the jail, with a tape recorder going he took full statement.

This was the beginning of a years-long case. The principal victim in the case, the woman mentioned above, told Nieves in her statement that “Maroney bailed me out of jail in exchange that I be his girlfriend. He threatened me every day that if I do not do what he asks he will revoke my bond and I will never get out and see my kids again. I have been doing this because I am afraid of him and his threats. He has been holding me hostage by these threats.”

Among the things Maroney had asked of her were yard work, house cleaning, and oral sex. The victim’s refusal on the latter is why Maroney was bringing her back to jail. After police issued a crimestoppers release about Maroney and interviewed previous clients of his, a pattern began to come into view. 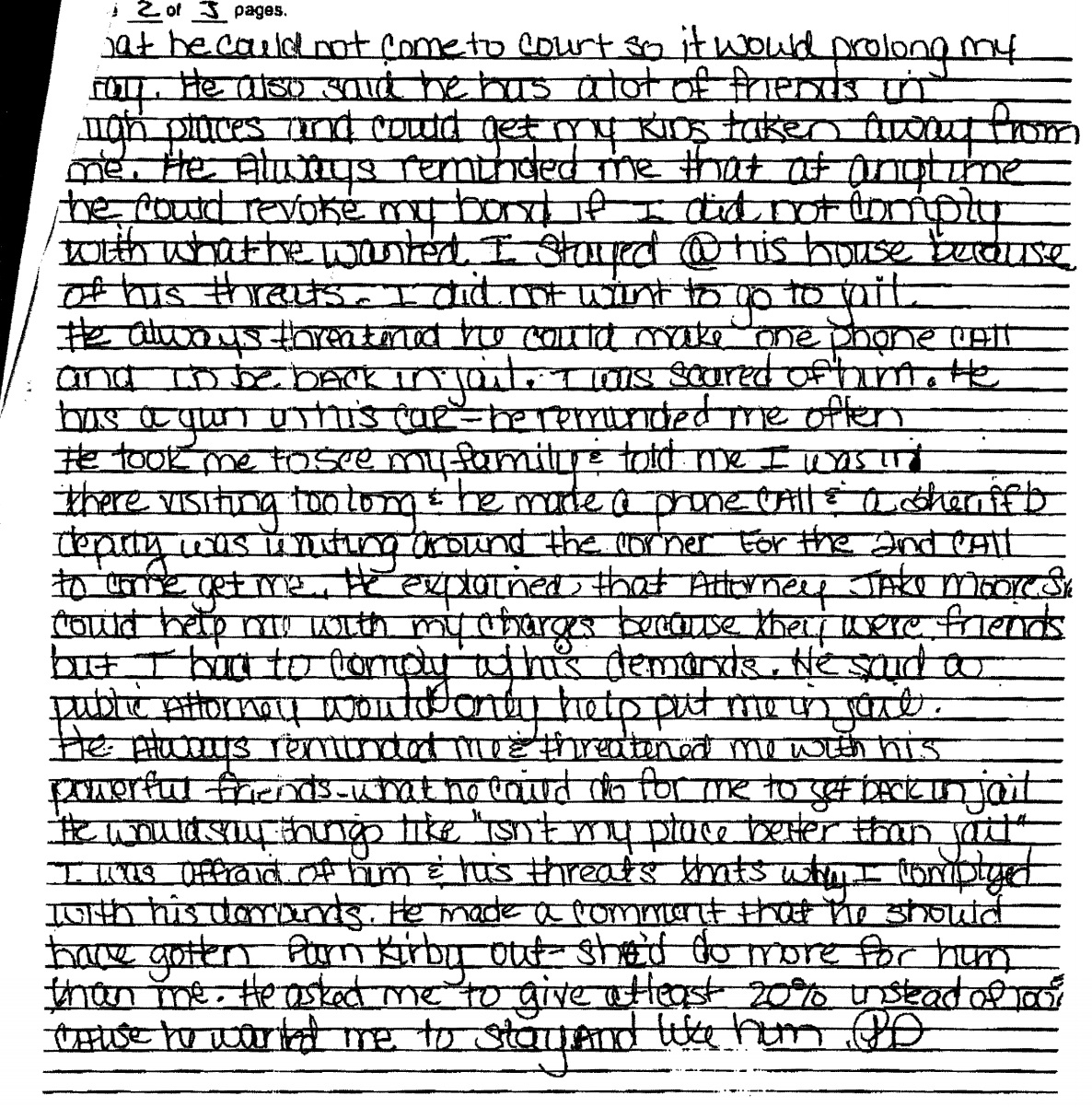 One victim was held for almost two weeks after she had agreed to Maroney’s demands in order for him to get her husband out of jail. Like the other victims, she noted his habit of keeping a gun in his car’s glove box at all times, along with the tasers and pepper spray that he kept around the house. Each victim noted his habit of moving the weaponry with a distinctly threatening air - “He had a gun in his car. He reminded me often,” reads a line from one of the statements. 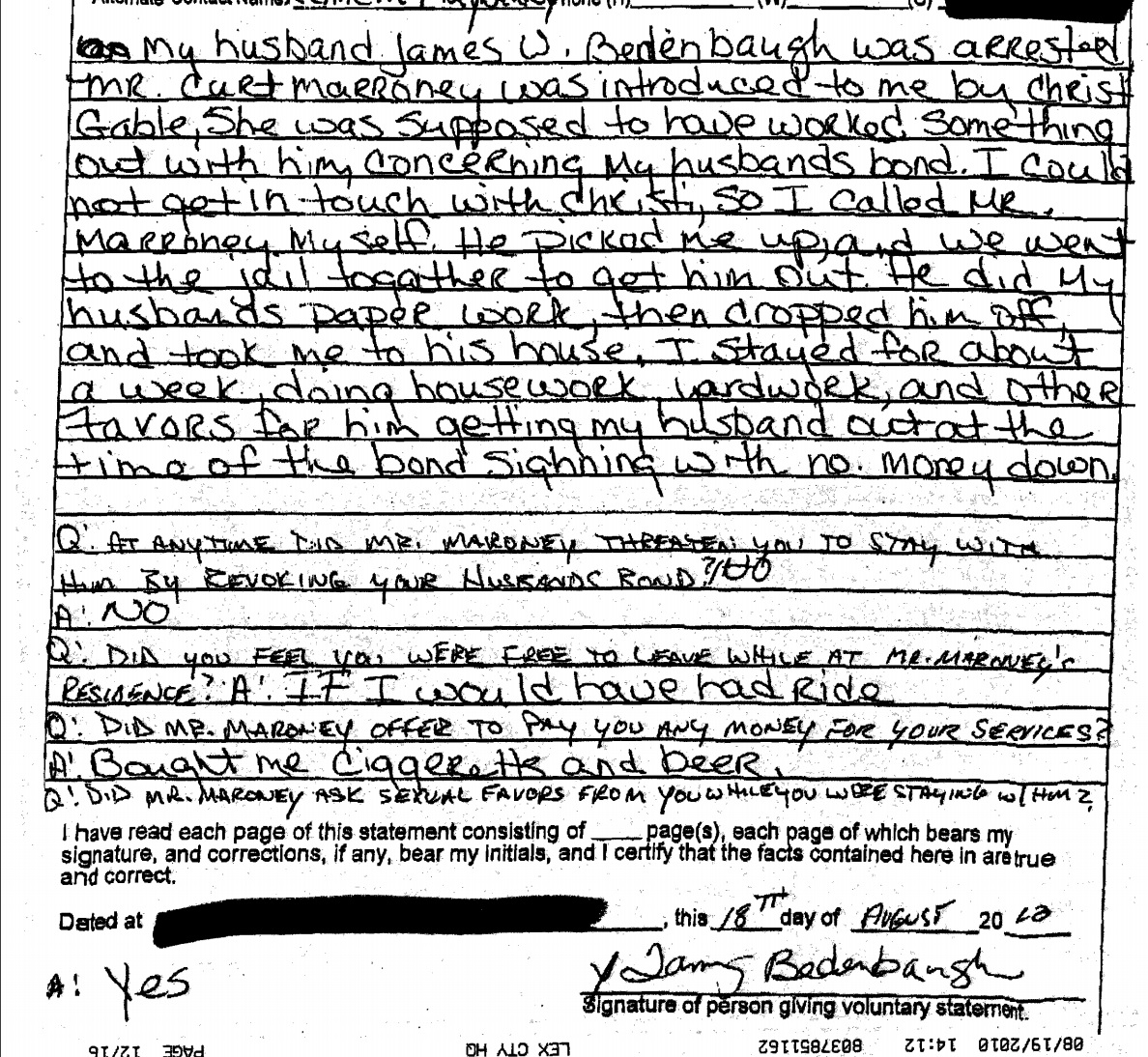 Other statements include his constantly threatening the women with jail because “he had friends in high places,” and his comment to one that he should have bailed out a different woman instead because she would have done more for him. He also continually talked about how he wanted these women to act like Beth, the wife of Dog the Bounty Hunter, a not insignificant glimpse into the man’s psyche. 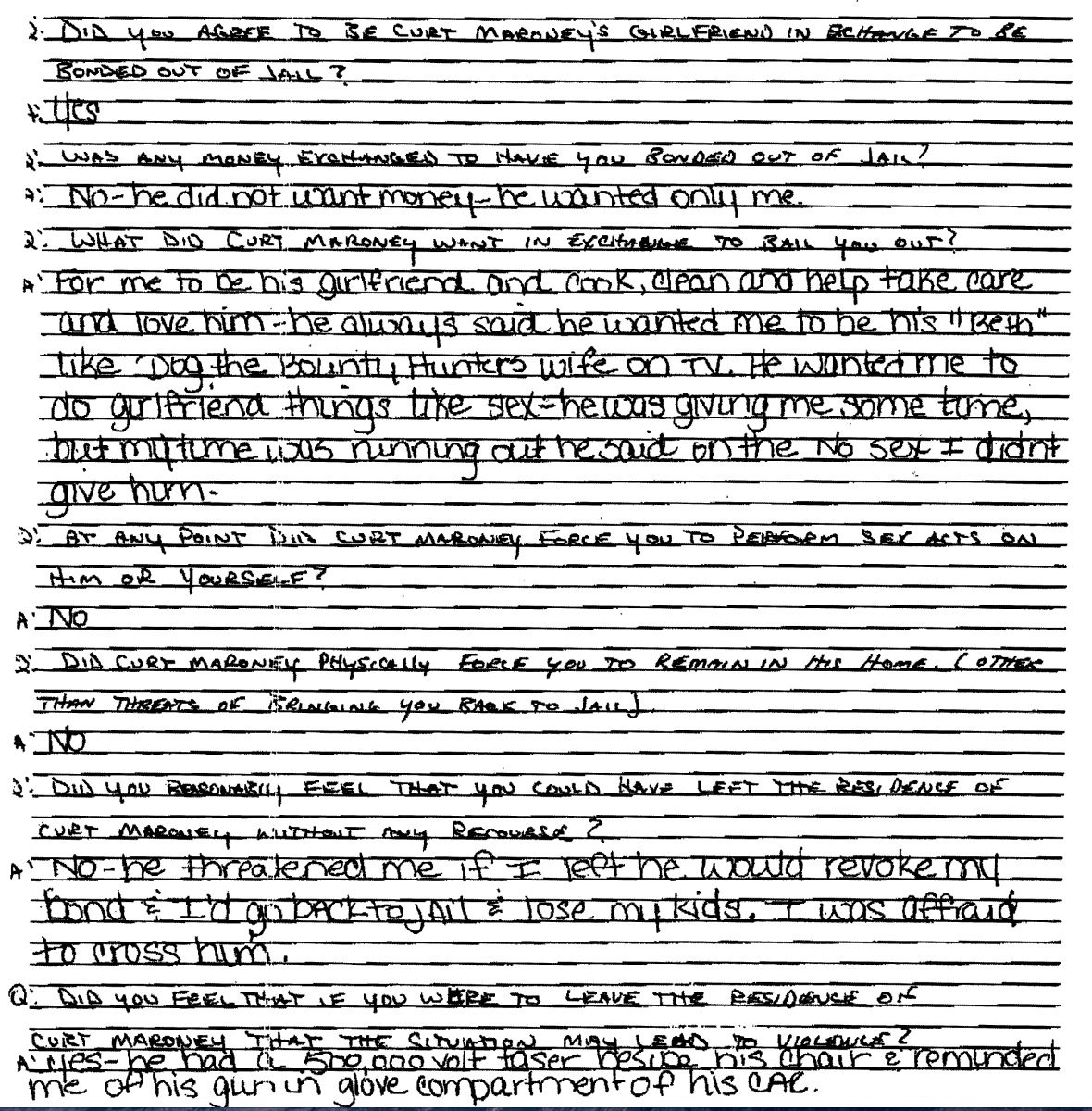 Two women’s statements indicate that they heard about him from word of mouth in the jail. If a woman didn’t have any money, Maroney would bail her out for free. When one woman called him and asked how this was so, he replied by saying he would do it if she would live with him and “be with him 24/7.” He also mentioned that he did not want her to have any contact with friends or family. When the woman told him no, he threatened her by saying that was a “bad decision,” and that she would “pay for that.” Another woman wrote, “Curt told me he would help me get out of jail if I help him get girls out of jail.” 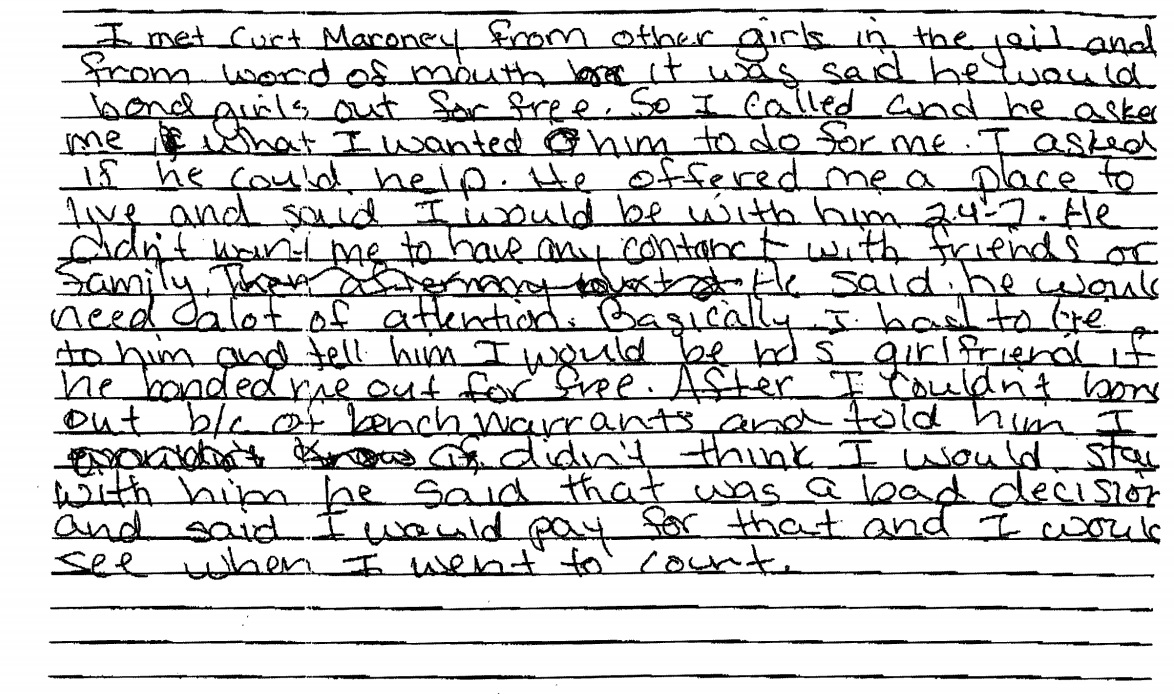 Maroney’s wife gave her own testimony and was asked by the interviewing detective how many women Maroney had blackmailed. Her answer was “there were so many, I don’t know.” In the end Maroney pled guilty in 2013, and was sentenced to just two years in prison for blackmail and extortion, along with having his license to practice bail enforcement revoked.

The biggest question here is how a man like Maroney wasn’t caught before a victim called the police? One particularly plausible theory is that it has something to do with the fact that South Carolina - like most other states we have surveyed - doesn’t really regulate the bail enforcement industry. We had asked SCDOI for policies, oversight bodies, and generally anything they could find on industry oversight, and this case was the only file we got back. Sadly, lack of meaningful oversight seems like par for the course - so far we have only gotten a few responses, and in North Dakota and South Carolina’s cases, they were criminal files wherein the police had only gotten involved because a victim had called them about their bail agent.

As we continue to investigate this issue, it is growing increasingly clear that the country needs to take a look at how to bring oversight into the bail enforcement process. Not regulating or auditing the nation’s bail enforcement systems only helps to perpetuate America’s tendency to ignore the problems of the poor, and allow them to be ruthlessly exploited by people like Curtis Maroney.

Read the full case embedded below, or on the request page.