From the late ’80s to the early ’90s, Nintendo dominated the video game market with its now-iconic console, the Nintendo Entertainment System. According to David Sheff’s 1993 book Game Over …

“[T]he Nintendo Entertainment System, in just five short years, was brought into more than a third of the households in the United States and Japan … Sega tried to compete with Nintendo, but in spite of investments in the hundreds of millions of dollars, they shared less than 10 to 15 percent of the market through 1991”

Nintendo’s incredible success earned it the ire of competitors, legislators, and regulators who believed the company built its business on unfair - and illegal - practices like price fixing. In 1989, Democratic congressman Dennis Eckart launched an inquiry into Nintendo. Soon, Eckart called on the the Department of Justice to investigate. The DOJ later passed the investigation off to the Federal Trade Commission, which worked with the attorneys general of New York and Maryland.

“There were no price wars throughout Nintendo’s first years in the marketplace because, it was alleged, Nintendo simply forbade them. Stores tried to discount the NES and the games, but Nintendo pressured them to stop. One chain reportedly lowered the price of the NES by a matter of cents and advertised it in Sunday newspapers, and a competitor called Nintendo, which immediately froze shipments to the company offering the lowered prices”

To put a stop to this behavior, the attorneys general of New York and Maryland reached a settlement with Nintendo in 1991. The company did not have to admit any wrongdoing, but it was required to cease any price fixing and advise dealers that they were free to set their own prices. It was was also required to pay $4.75 million to the 39 states that were party to the price fixing dispute to cover administrative and enforcement costs. Furthermore, it was required to issue up to $25 million in $5 coupons to customers who bought an NES between June 1, 1988, and December 31, 1990. The coupons could only be used on NES games. 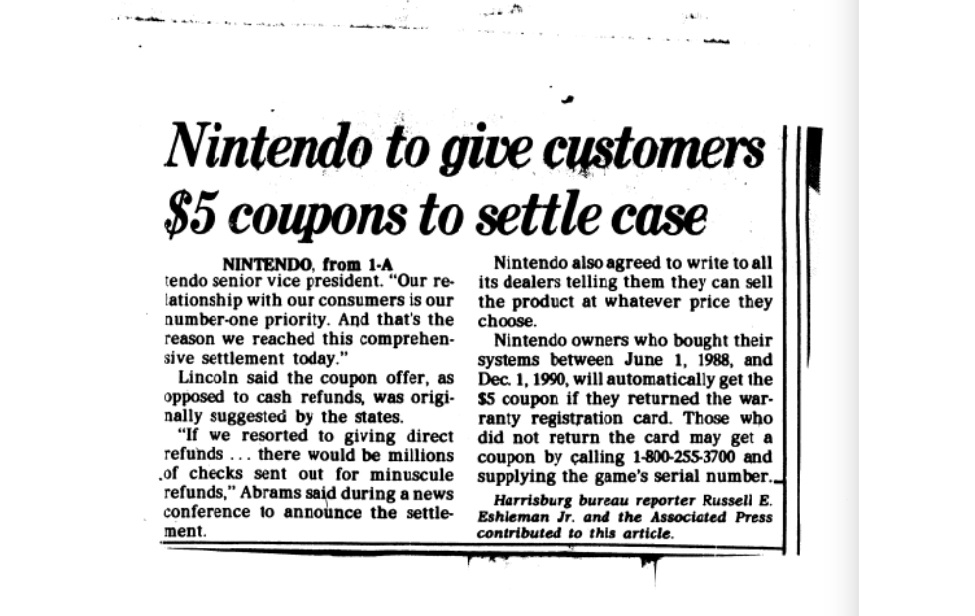 After the agreement was announced, Nintendo was still facing action from the FTC. However, the regulatory agency proposed a consent order that would not impose any additional punishment on the company.

Before finalizing the agreement, the FTC accepted comments from the public. Everyone who commented expressed some degree of dissatisfaction with the proposed consent order. However, the FTC ultimately made no changes to the agreement before entering into it with Nintendo.

Many of the letters complained about the plan to provide consumers with coupons.

Atari president Sam Tramiel complained that by not punishing Nintendo for its price fixing, the FTC was rewarding the company. Tramiel wanted Nintendo to be required to pay restitution and admit liability for price fixing.

Riley Russell, a lawyer for Sega, likewise argued that the settlement benefited Nintendo at the expense of consumers. He also called on the FTC to release financial information about Nintendo.

On the other hand, James McAfee suggested that inflated prices were no big deal because Nintendo’s video games were “turning promising young muscles and brains to porridge.”

And Republican congressman William Dannemeyer argued that Nintendo was being unfairly targeted and that its business practices actually benefited consumers.

Regardless of what the public and Nintendo’s competitors thought about the agreements, the company’s bigwigs weren’t pleased. “Even without admitting liability, it has hurt to be called price-fixers,” said Nintendo senior vice president Howard Lincoln.

Read the full FTC release embedded below, or on the request page.