John Hinckley Jr., the would-be assassin of Presidents Carter and Reagan and ultimately James Brady’s killer, was released a little more than a month ago. Earlier this year, a request was filed with the FBI file on his deceased father, John Hinckley Sr.

The goal was simply to get a little more information and hopefully debunk or confirm conspiracy theories about connections between the Hinckley family and the Bush family. While those theories are briefly and indirectly addressed, the most fascinating tidbit came from the end of an FBI interview with John Hinckley Sr. - some High Weirdness in the form of a time traveling neo-Nazi organization.

Intrigued by Hinckley Jr.’s connections to this neo-Nazi organization, I turned to the Anti-Defamation League’s (ADL)’s website. Unsurprisingly, the ADL had an entry on the group, complete with its background and history. The only problem was that, according to the ADL entry, the American Front wasn’t founded until about eight years later. 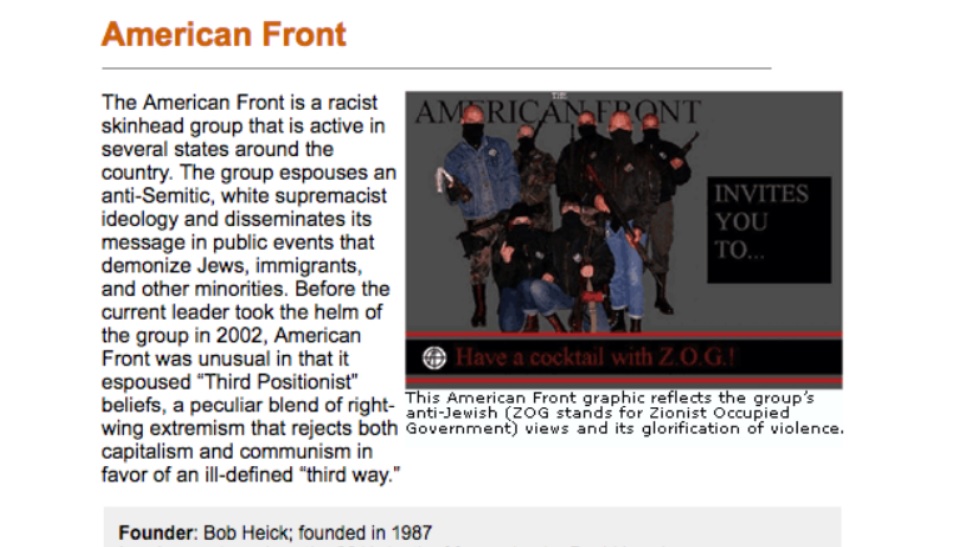 High Weirdness, indeed. Additional searching found claims that the group was actually founded in 1984, when some sources say the founder first encounter skinhead philosophy. Other reports, like one from G. Gordon Liddy of Watergate infamy, claim that the group was founded as late as “around 1990.”

Contemporary newspapers accounts covering the trial are able to provide a seemingly simple answer to this discrepancy: Hinckley Jr. made the group up and claimed himself as its leader as part of his delusions.

At the time, this seemed a reasonable explanation for an unreasonable man’s behavior, but lingering questions remain. The typical timeline provided by newspapers and books about the assassination attempt and trial are mostly consistent on statements that Hinckley bought his first gun in August 1979 and then created the imaginary American Front in September 1979.

However, Hinckley Sr.’s statement to the FBI was clear about Hinckley Jr.’s letter coming in “early 1979” and saying that he had become “associated” with the group. A statement from Mrs. Hinckley confirmed Hinckley Sr.’s timeline, and only a single UPI article seems to put Hinckley’s apparent creation of this group before his letter to his parents, in the preceding fall. This discrepancy has yet to be explained.

A look at both of the statements made by Hinckley Jr.’s psychiatrist in the news and the references to his statements in the transcript of the trial’s closing statements shows that this allegedly imaginary connection to the American Front was a major factor in determining he was insane. After all, claiming to be the leader of an imaginary neo-Nazi group is a rather insane thing to do.

According to the closing arguments, and echoed in several newspapers, Hinckley Jr. had produced extensive and fictitious membership lists in addition to producing a newsletter for the group. The defense tried to emphasize this as part of the insanity defense, while the prosecution apparently didn’t find it bizarre. 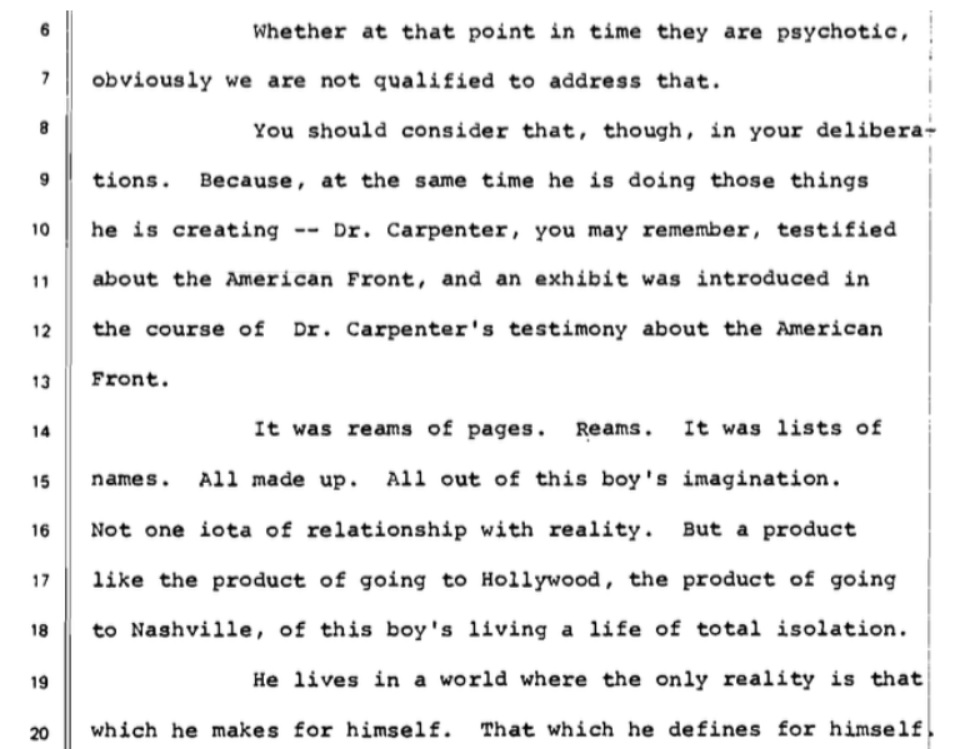 Although his father was apparently unaware of it, Hinckley Jr. had actually joined several real Nazi groups including the National Socialist Party of America. He marched in a rally for the latter, dressed in a Nazi uniform. Ultimately, the groups apparently turned him away for being too violent (according to both the Nazi groups and Hinckley’s notes). This is, however, at odds with statements Hinckley’s psychiatrist made, including that Hinckley saw the “American Front as standing somewhere between conservative Republicanism and the Nazis.”

The discrepancies in the timeline, the discrepancies in the description of the allegedly fictitious group, and the group’s later emergence as real all raise a number of interesting questions. Given his real ties to Nazi groups and individuals, were none of the members of his group real? The investigation was closed and the trial over before the earliest estimate of the emergence of the legitimate American Front, as a spin-off of the National Front in the UK, which means that there was never an investigation into whether the name was a coincidence or a connection.

Moving on from one conspiracy theory to another - the alleged Bush connection. 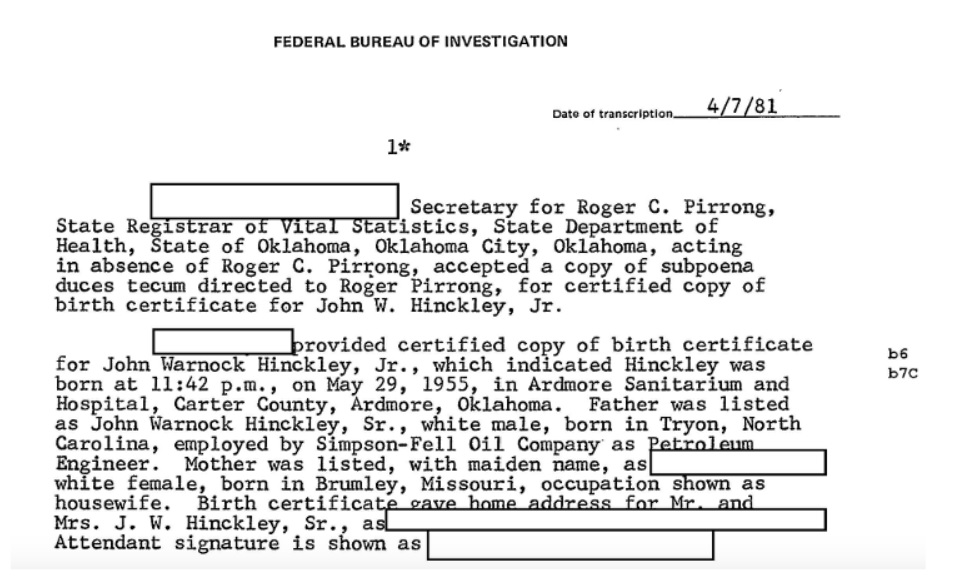 Hinckley Sr. had been an oil engineer, and by the time of the attempted assassination of Ronald Reagan he was the owner of Vanderbilt Energy Corporation. In 1981, the company was worth over four million dollars and operated 200 oil and natural gas wells.

Some of the conspiracy theories surrounding the Hinckley family and the attempted assassination of Ronald Reagan come from the theory that the Vanderbilt Energy Corporation was connected to the Vanderbilt family. The FBI file, however, provides a different explanation - the company was named for Vanderbilt University. 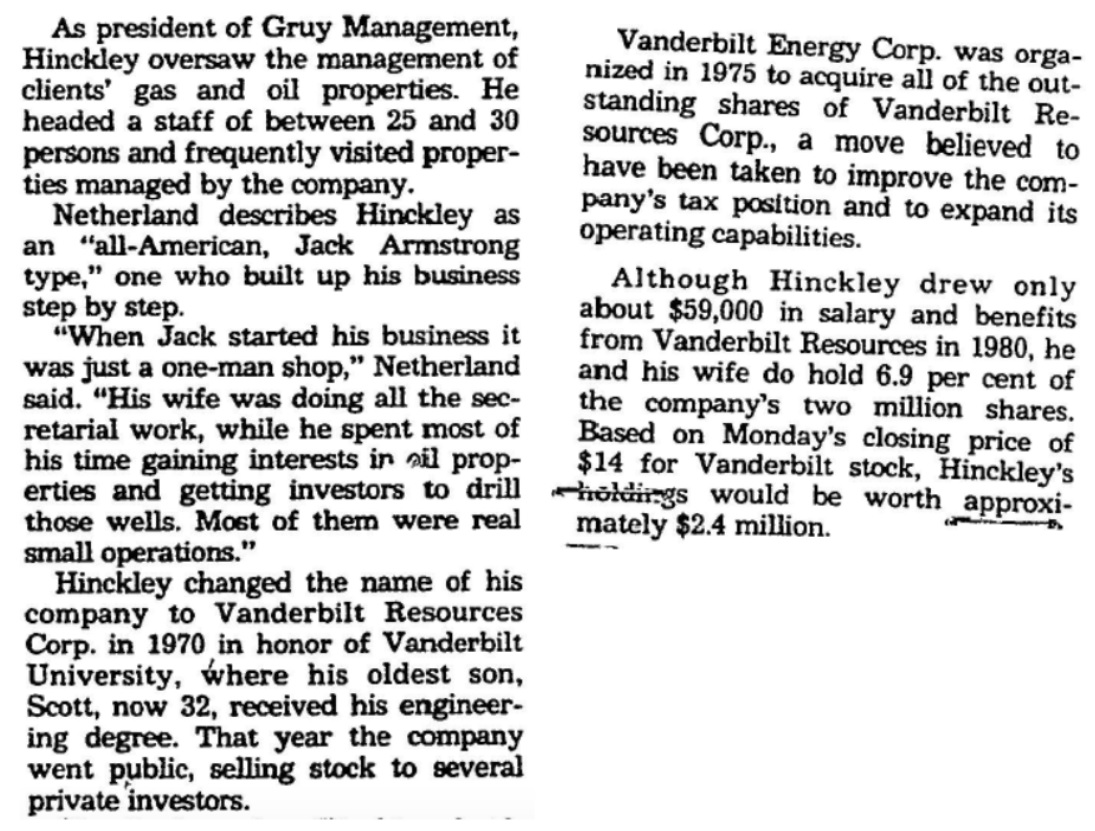 Despite contributing to the Reagan and Bush campaigns and speaking on their behalf (although not as a lobbyist), Hinckley Sr. denied any connection to the Bush family prior to the assassination attempt. Unfortunately, it’s impossible to prove a negative, and files on the rest of the family have yet to be released. He could also only speculate on how Hinckley Jr. had gotten from California to Washington D.C. to shoot at President Reagan.

Coincidentally, California is where the American Front is usually believed to have originated.

As for Hinckley Jr.’s politics, he apparently favored Ronald Reagan before he tried to kill him. This matches his original plan to kill President Carter, but it is nevertheless surprising to see him turn around and attempt to kill the President he had previously admired.

Finally, regarding one of the most famous details of the assassination attempt - Hinckley Sr. had never heard of Jodie Foster or the movie Taxi Driver (referred to in the file as simply “Taxi”)

Ultimately, the file provided a little insight into debunking some of the conspiracy theories but was unable to provide any hard evidence. Since it’s extremely unlikely that there are actually time traveling neo-Nazi involved, there are some lingering questions about the connections Hinckley Jr. had to the Nazi Party and the various neo-Nazi groups, including the one he apparently created and one which would later share the same name and message.

As for lingering questions about the father, there seems to be little that the FBI could provide. However, his international activities give rise to the possibility that he could have been a CIA contact. Only time and additional FOIAs can tell.

Read the full file on the request page.