For almost six years, MuckRockers have been working to find more about how their government works, and the results have been incredible: 19,078 requests filed to 5,476 agencies, resulting in 748,950 pages released plus countless databases, spreadsheets, and other public record goodness.

But behind every public records release is an agency staff member doing their job. Sometimes handling records requests is all they do, making sure requests get to the right person and are handled fairly and (hopefully) quickly, balancing the public’s right to know against exemptions. For thousands of agencies, these public servants juggle public records duties on top of other, full-time jobs: Being a county clerk, the head of a police department, or any one of a number of roles.

It’s easy to get frustrated with the process, but it wouldn’t exist at all without the hard work that these individuals do day in and day out to serve the public, often taking the brunt of a requester’s frustration when the handling of the request might well be outside of their control.

So today and the rest of the week, we wanted to take a moment to say thank you: Thank you to all the individuals out there working on behalf of the people to keep government open and accessible, and thank you especially to those who go above and beyond in these duties to help requesters and the public better understand how government works.

To make it a little easier, we’ve added a new “Thanks Agency” button to all completed requests (even if they weren’t completed with documents; sometimes agencies are helpful in explaining that they don’t have what you’re looking for). 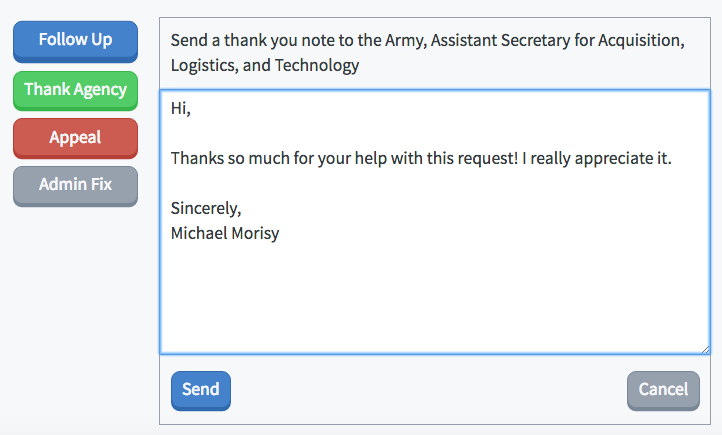 We’ll insert a simple thank you note to get you started, but encourage you to personalize the message. Using the “Thank Agency” tool won’t change a request’s status, so you don’t have to worry about it kicking off a round of accidental follow ups.

We’d also like to highlight helpful agencies: Towards the end of the year, we’ll be running a series on when public records worked right and offering tips on how both requesters and agencies can work better together.

Have a FOIA success story and want to shine the light on an agency that did things right? Share it here. And no matter where you are or what you’re after, have a very happy Thanksgiving!

Thanks! Submissions are now closed, but you can see some of the thanked agencies here.

Image courtesy of Texas Department of Parks and Wildlife

Release Notes: What your newsroom needs to know about the DocumentCloud migration

Release Notes: MuckRock’s biggest upgrade in years is one we hope you won’t notice