The city of Lawrence, Massachusetts, has struggled deeply in almost every way that a city can - corruption allegations leveled against its top officials, schools so bad that the city’s system was the first in the state to be placed in receivership, one of the highest incidences of violent crime in the state, and an unemployment rate that remains in the double digits to this day. It should be no surprise that a 2012 Boston Magazine article called Lawrence the ‘city of the damned’.

A mill town for generations, Lawrence has always attracted a large immigrant population, and when those mills closed shop, many were left without work. Fiscal mismanagement and corruption did nothing to ease this growing pain. As a result of these financial woes, the city has consistently devoted smaller portions of its budget to its fire department over the last twenty-five years. As a result, more fire damage was incurred, ultimately pushing the cost of fires off of the city and onto the often already vulnerable property owners of Lawrence. 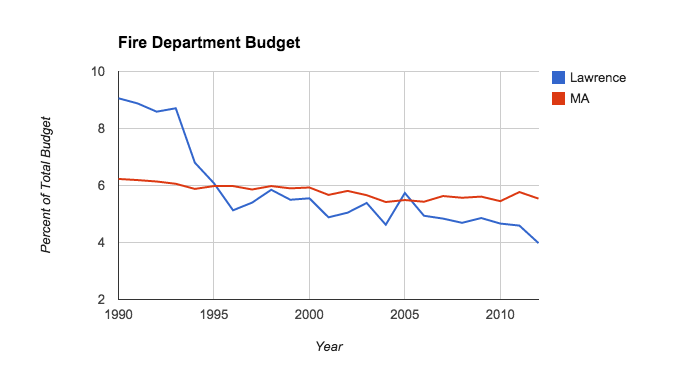 Data courtesy of municipal budgets obtained by MuckRock and the Mass. DOR.

The decrease in fire department funding as a portion of the budget is visible in the graph above. Funding for the Lawrence Fire Department dropped below the state average in 1996. While this didn’t immediately result in a higher incidence of property damage, it left the city vulnerable. When the recession hit, the city’s fire readiness suffered.

One of the best ways to evaluate the effectiveness and readiness of a fire department is to look at the average property damage caused per fire. A low number suggests that firefighters are arriving quickly to the scene and have the tools and training needed to do their jobs. A high number suggests the opposite.

When we look at this data point over the last 25 years, a few spikes can be seen before 2005, but each is confined to a single year. In general, the amount of property damage caused per fire in Lawrence is relatively low and in line with levels seen throughout the state. The 1991 surge has sometimes been attributed to arson after a lead law was passed. The Malden Mills Fire caused an incredible $500 million of property damage - as such, we chose to remove Essex County data from this year because of its warping effect on the graph. Another small spike is visible in the early 2000s. In 2005, however, we see a sustained trend of fires causing more damage in Lawrence than in other parts of Essex County or the state as a whole. 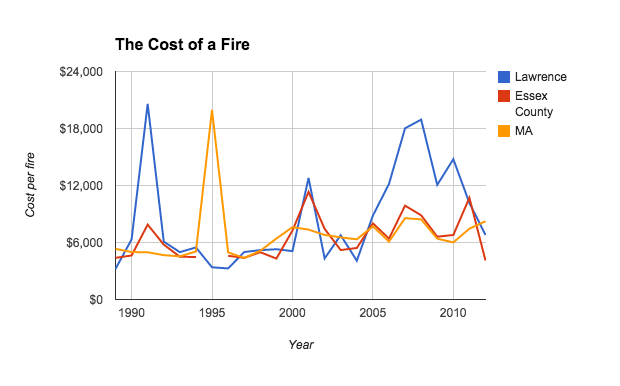 The cost to the residents of Lawrence was not insubstantial. Fires caused a total of $5,081,917 in damage in 2007 alone. This cost would have been more than $2.5 million less if the average cost of a fire had been at the state’s levels. The years 2008 and 2010 were even more needlessly expensive. In all, fires caused over $27.7 million in property damage in Lawrence between 2005 and 2011. Had the average cost per fire matched the state average, this figure would have been just over $14.6 million - a difference of almost $13.1 million.

During this period, 2005 was the only year in which Lawrence devoted a larger share of its budget to its fire department than the total state average, with total funding came to $73.4 million. By comparing the total state average for fire department spending to Lawrence budget numbers from the Department of Revenue, we can calculate what the city would have spent if its budget priorities matched those of the state as a whole. This comes to just over $83.5 million - only $10.2 million more.

The fact that fires actually caused almost $3 million more in property damage during this period than the city saved by cutting back its fire department is frustrating in itself. Even more frustrating is the realization that a fire’s effect goes beyond money - these figures don’t just represent financial impact, they depict businesses and homes lost to fire because emergency responders couldn’t get to them quickly enough.

Amazingly, in going through the minutes for the 2005 Lawrence City Council meeting we found reference to fire departments in one district that were in such bad condition that they posed “a threat to public safety,” according to one councilor.

To be clear, every town has to set its own budget priorities. Several factors may have affected the levels of property damage happening in Lawrence and there is no way of saying for certain that a higher level of funding would have resulted in less damage being incurred.

However, it seems worth noting that the city is still being forced to cut its fire budget, and while property damage levels have gone back down, a recent NECN article attributed this to the support of surrounding towns, which frequently respond to fires in the city.

Murphy’s sentiment echoed the words of former Fire Chief Peter Takvorian, who in 2009 told The Eagle Tribune that he could not “provide an adequate level of public safety in the city” in light of further cuts that were set to occur as a result of a further loss of state funding.

Whether the cuts to the fire department budget resulted more from Lawrence’s chronic mismanagement, from cuts to state funding, or from redirection of federal funding toward national security is simply irrelevant. It is equally unimportant whether the cuts to fire departments, when taken over the entire course of these 25 years add up to more money than was cost to individuals by additional fire damage. Fire departments protect our citizens and our communities - they should be a priority at every level.

The 2007-2008 budget is embedded below, with the rest available on the request page.

Alex Richardson sent this request to the Department of Budget and Finance of Lawrence, MA