Copying the language used by MuckRock user Dave Maass to get California’s data, I decided to request the same data from several states, including Arizona, Colorado, Florida, Massachusetts, Texas, Vermont, and Washington. For different reasons, data from Washington and Colorado were unavailable at the time of the requests, while the Massachusetts Department of Criminal Justice has yet to acknowledge my request, originally filed on October 3, 2014.

The data from Texas concerns only felony charges and was broken down by the amount of marijuana, from less than two ounces to more than 2,000 pounds. The graph below clearly shows that the vast majority of citations for marijuana possession in that state are between four ounces and 2,000 pounds. 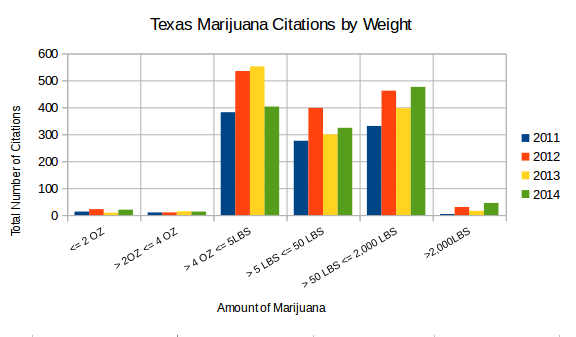 Between 2011 and 2014, ninety-five people were caught in possession of more than 2,000 pounds of marijuana in Texas, which carries a mandatory minimum sentence of five years in prison. 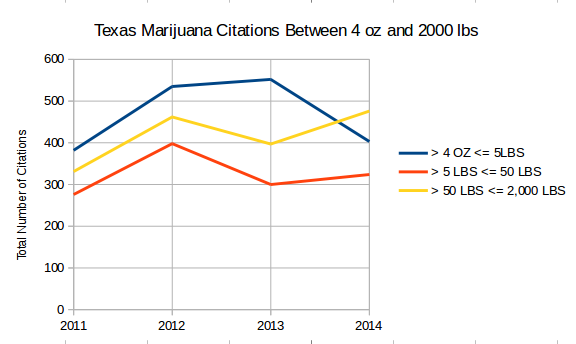 Possession offenses for Texas also included information on whether or not the offender was in a “Drug-Free Zone” when they were busted. 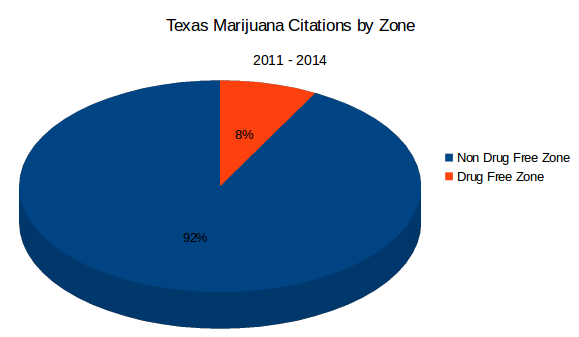 As a bonus, the data from Texas included not just marijuana citations, but possession offenses for all sorts of drugs. Below is a pie chart of offenses by type of drug, however there is a lot of interesting information to be found in the data if you’d like to explore it yourself. 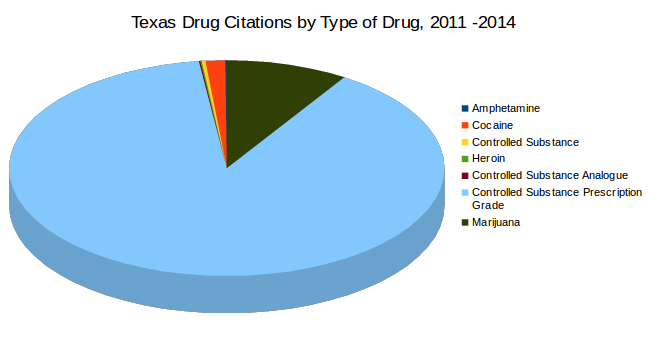 Vermont’s marijuana citations were not broken down by year. However, the data did include information on the type of offense, indicating that the vast majority of offenders in that state who were cited between 2011 and 2014 were over 21 when they were busted for the first time, while only 12.3% of citations were doled out to first-time offenders under 21. 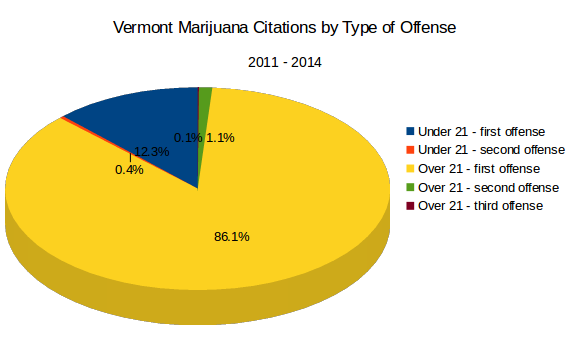 According to NORML, in Vermont “Possession of one ounce or less of marijuana and/or marijuana paraphernalia by a person 21 years of age or older is punishable by a civil fine only - no arrest, no jail time, and no criminal record.”

Below is a graph of the total number of citations for Arizona, California, Florida, Texas, and Vermont. (Data from California is only through 2013, while Florida’s data is through October 3 – the date I submitted my FOIA request – and Vermont’s data is the sum of all citations divided by four to represent a yearly average.) 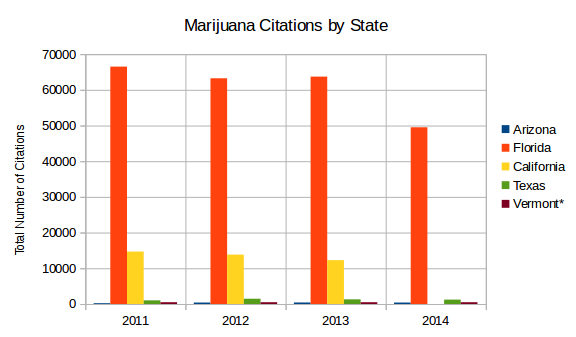 Obviously, the number of citations handed out in Florida blows the rest of the states out of the water. Possession of more than 20 grams of marijuana in Florida is a felony that warrants a maximum punishment of five years in prison and a fine of up to $5,000. 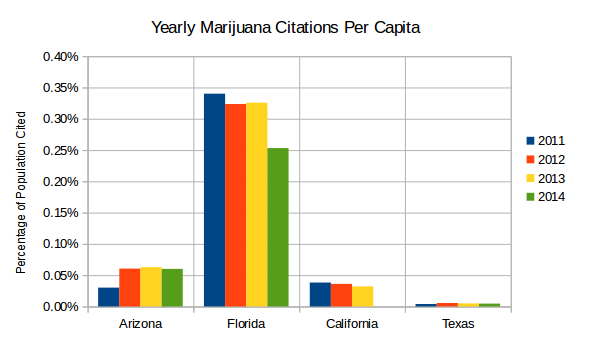 Even after controlling for population, Florida still surpasses the rest of the states by far, handing out tickets to one in 294 people in 2011. Compare this to Arizona, the next largest distributor of marijuana citations per capita in the sample, which issued one citation for every 3,313 people in 2011. According to Arizona law, possession of any amount of marijuana is a felony, with a maximum fine of $750 and a minimum sentence of four months behind bars.

The drop in 2014 in Florida is likely an artifact of the data covering only through October 3 of that year. Removing Florida from the data (and adding Vermont) allows us to look closer at the other states in the sample. 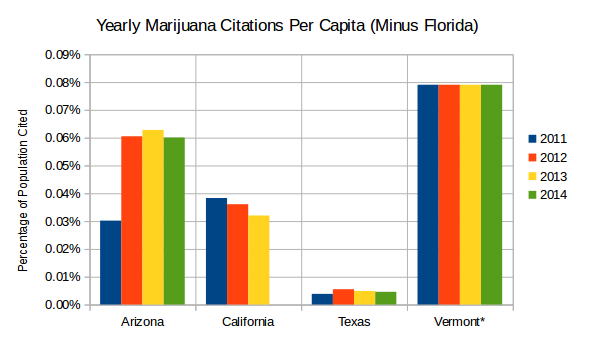 Interestingly, between 2011 and 2012, marijuana citations in Arizona nearly doubled, and they remained at that level through 2014. Additionally, although changes in Vermont’s number of citations through the years are indeterminable due to the format of the data provided, the yearly average is significantly higher than the numbers from Arizona, California and Texas.

In total, the number of citations in Florida from 2011 through 2014 is nearly five times that of the rest of the states combined, despite the fact that Florida’s population is approximately half of California’s.

While it is impossible to garner an accurate average from the data provided here, one thing is for certain: Florida is no paradise for stoners.

Header image via Wikimedia Commons and is licensed under CC BY-SA 2.0